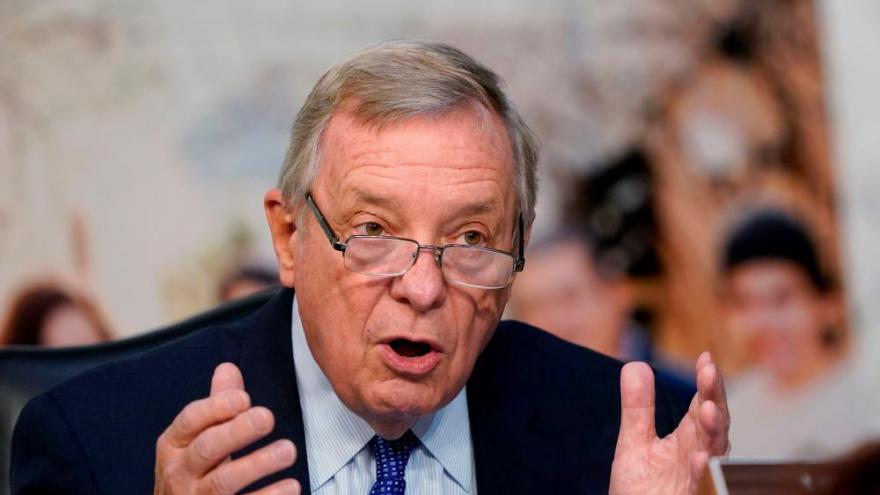 Senate Judiciary Chairman Dick Durbin, seen here in this file image from October 14, 2020, indicated that Congress is not likely to approve a comprehensive immigration bill.

"I don't see a means for reaching that," Durbin, the Senate majority whip, told CNN when asked about the pathway to citizenship. "I want it. I think we are much more likely to deal with discrete elements."

To move such a plan, the Senate would need 60 votes to overcome a likely GOP filibuster attempt, something that would be difficult given the roiling politics on immigration and ongoing problems at the border that Republicans are pointing to as a demand for far stricter policies. A growing number of Democrats have pushed to gut the filibuster in order to move legislation through the narrowly divided chamber with just 51 votes, but several Democrats oppose such a move, meaning the 60-vote threshold will remain indefinitely.

Durbin, a Democrat from Illinois, indicated that it's more likely that Congress would be able to move specific pieces of immigration policy, rather than a comprehensive immigration bill that advocates have been trying to enact for more than a decade. Durbin pointed to the decision by House Speaker Nancy Pelosi to move this week on two specific pieces -- a pathway to citizenship for undocumented immigrants who came to the United States as children, known as Dreamers, as well as legal protections for farm workers -- as a clear indication of where this Congress is headed.

"I think Speaker Pelosi has discovered that she doesn't have support for the comprehensive bill in the House," Durbin said. "And it indicates where it is in the Senate as well."

Durbin said he believes the Senate Judiciary Committee wouldn't act on legislation until April at the earliest.

Once the two bills pass the House, Durbin said, "I have to sit down with my colleagues to see if there's any bipartisan consensus to move those two as starting points."

Yet Pelosi still wants to advance a comprehensive bill -- even though it stands little chance in the Senate. And in a clear sign of the challenges facing Democrats, Sen. Lindsey Graham, a senior GOP member on the Senate Judiciary Committee who helped craft a bipartisan immigration deal that passed the Senate in 2013, says now is not the time to do one given the situation at the border.

"We're not going to do a comprehensive immigration bill," Graham, a South Carolina Republican, told CNN. "I just don't see the politics of it. It's too out of control."

Graham, who used to be friendly with Biden but has allied himself closely with former President Donald Trump, said Biden has not called him since taking office. Asked why he has yet to speak with the President, Graham said: "He's a busy man. No hurry."

Others like Sen. Joe Manchin have gotten Biden's attention. Manchin, the West Virginia Democrat who backed the 2013 bill, says he would do so again. But he also said the situation at the border is a "crisis," going further than the White House, and said he would wait to get briefed before assessing the administration's response.

"Whatever message was sent -- it was sure interpreted the wrong way," Manchin said. "It's a crisis -- oh it's a crisis."

Biden is facing growing political tension, including from within his own party, over his administration's strategy on the US-Mexico border as well as on an immigration policy on the whole as officials race to address a number of children crossing the border alone. More than 4,000 unaccompanied migrant children are in Border Patrol custody, CNN has learned, marking yet another increase in the number of children held up in border facilities until officials can accommodate them in shelters that are suited for them.

Under the Trump administration, border officials had been turning away migrants, including children, after putting in place a public health order related to the pandemic. While the Biden administration is still largely leaning on that policy for adults and families, the administration has taken the position that it will allow children arriving on their own into the US, resulting in more kids in federal custody.

Texas Republican Sen. John Cornyn said Monday the crisis on the southern border is making it hard to find bipartisan consensus in Congress on needed changes to immigration laws, including passing legislation to help those who are recipients of the Deferred Action for Childhood Arrivals program.

"I'm on record saying I'd like to find a permanent solution to the DACA recipients," Cornyn told reporters. "The problems is every time we try to meet the Democrats halfway, they move the goalposts."

He pointed to the situation at the border now.

"Unless there is some way to bring some control and order to that situation, I think it makes it very hard to do other things on a bipartisan basis," Cornyn said. "That's one of the casualties of the failure to think ahead of time. If you're going to reverse Trump policies, what's your plan? Well, they didn't have a plan. Other than to say, 'don't come now' when all the other signals are, you know, 'come on in. If you can get here, you're going to stay."