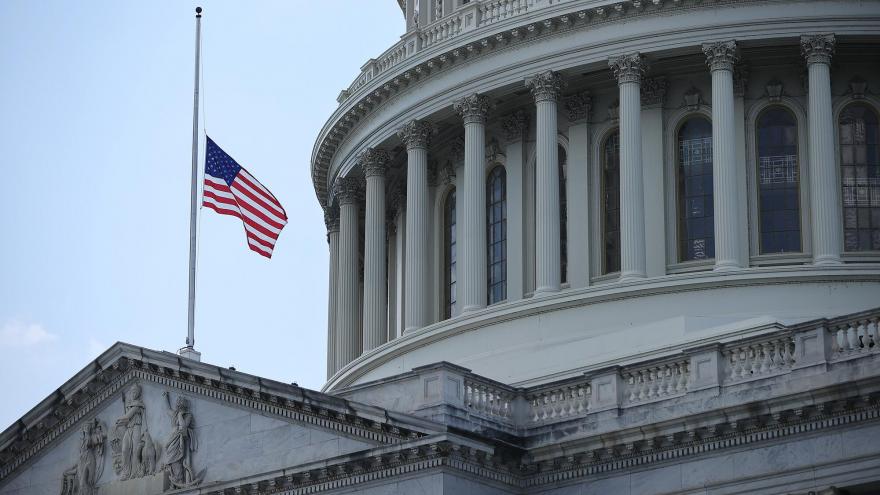 The Office of the Director of National Intelligence has informed the House and Senate Select Committees on Intelligence that it'll no longer be briefing on election security issues, a senior administration official told CNN.

(CNN) -- The Office of the Director of National Intelligence has informed the House and Senate Select Committees on Intelligence that it'll no longer be briefing in-person on election security issues, according to letters obtained by CNN. Instead, ODNI will primarily provide written updates to the congressional panels, a senior administration official said.

Still, the abrupt announcement is a change that runs counter to the pledge of transparency and regular briefings on election threats by the intelligence community.

It also comes after the top intelligence official on election security issued a statement earlier this month saying China, Russia and Iran are seeking to interfere in the 2020 US election, a warning that prompted some backlash from Democrats on Capitol Hill who have continued to push for the public release of more information about the nature of those efforts.

US officials charged with protecting the 2020 election also said last week that they have "no information or intelligence" foreign countries, including Russia, are attempting to undermine any part of the mail-in voting process, contradicting President Donald Trump, who has repeatedly pushed false claims that foreign adversaries are targeting mail ballots as part of a "rigged" presidential race.

Specifically, a senior intelligence official discounted the possibility of foreign actors mass producing fake ballots to interfere in the November elections, again breaking with Trump who has continued to insist that mail-in voting poses a significant threat to election security.

"We have no information or intelligence that any nation state threat actor is engaging in activity ... to undermine any part of the mail-in vote or ballots," the official told reporters on Wednesday.

Trump said Saturday that Director of National Intelligence John Ratcliffe "got tired of" information leaking "so, he wants to do it in a different form."

"Director Ratcliffe brought information into the committee, and the information leaked," Trump said at an event in Texas.

"So, he wants to do it in a different form because you have leakers on the committee, obviously, leakers that are doing bad things, probably not even legal to leak, but we'll look into that separately," Trump said.

Although the letter from the ODNI to House Speaker Nancy Pelosi is stamped as having been delivered Friday, a source in the speaker's office said the office only received the letter Saturday evening after 5 p.m., via email, hours after the story broke on CNN and hours after CNN obtained a copy of it. Senate Minority Leader Chuck Schumer only received his letter late Saturday, too, according to a Schumer aide.

Democratic leaders on Saturday denounced the decision by the ODNI to no longer provide in-person briefings to members of Congress, including the House and Senate Intelligence Committees, on election security.

"This is a shocking abdication of its lawful responsibility to keep the Congress currently informed, and a betrayal of the public's right to know how foreign powers are trying to subvert our democracy. This intelligence belongs to the American people, not the agencies which are its custodian. And the American people have both the right and the need to know that another nation, Russia, is trying to help decide who their president should be," Pelosi and Schiff said in a statement.

"The ODNI had requested the opportunity to brief the intelligence committees and the full US House of Representatives in mid-September and has now cancelled those briefings and said it would hold no others. This is shameful and -- coming only weeks before the election -- demonstrates that the Trump Administration is engaged in a politicized effort to withhold election-related information from Congress and the American people at the precise moment that greater transparency and accountability is required," Pelosi and Schiff added.

Schumer on Saturday also called the decision not to provide briefings an "abdication of the Intelligence Community's duty" and said Ratcliffe "has made clear he's in the job only to protect Trump from democracy, not democracy from Trump."

"Our intelligence officials have said there's an active, ongoing assault on our democratic process from Russia. President Trump is simply using John Ratcliffe to hide the ugly truth from the American people - that the President is again receiving the help of the Kremlin," the New York Democrat said in a statement.

Senate Intelligence Vice Chairman Mark Warner called the decision to stop in-person briefings an "unprecedented attempt to politicize an issue -- protecting our democracy from foreign intervention -- that should be non-partisan."

"Russia interfered in our elections in 2016, and they're doing it again in 2020. One (of) the lessons we should draw from what happened in 2016 is that Congress and the American public need to know more information about the election interference threat — not less," the Virginia Democrat said a statement.

Former Vice President Joe Biden's campaign condemned the move and called on it to be reversed.

"For his administration to constrain the information being provided to the peoples' representatives in Congress as this national security threat multiplies -- especially given Donald Trump's unprecedented welcoming of these assaults on our democracy for his own gain -- is deeply alarming. This should be reversed immediately," spokesman Andrew Bates said in a statement Saturday.

"I have spoken to the Director Radcliffe who stated unequivocally that he will continue to fulfill these obligations. In particular, he made explicitly clear that the Senate Select Committee on Intelligence will continue receiving briefings on all oversight topics, including election matters," the Florida Republican said.

An ODNI official defended the move Saturday, telling CNN that Ratcliffe "is committed to meeting our statutory responsibilities and keeping Congress fully and currently informed."

Intelligence officials have previously expressed frustration over information presented in classified sessions with congressional committees leaking to the press but offered no indication of a coming change to the briefing format.

"In an election year, we recognize that no matter what the U.S. Intelligence Community says on this issue, it will be parsed, spun and likely criticized in the U.S. political ecosystem. The bottom line is that this represents the most current, accurate and objective election threat information the Intelligence Community has to offer the public at this time," an ODNI official told CNN earlier this month.

"The steps we have taken thus far to inform the public and other key stakeholders on threats to the election ... are unprecedented for the Intelligence Community. We will continue providing election threat updates to the American public, the presidential campaigns, political committees, and members of Congress," the ODNI official added.

Last month, the top intelligence official for election security, Bill Evanina, also reiterated a commitment to providing "robust intelligence-based briefings on election security" to key stakeholders that include Congress, along with the political parties and presidential campaigns.

A shift to written briefings will undoubtedly limit lawmakers' ability to ask questions of intelligence officials in real time, according to former Director of National Intelligence James Clapper.

"With a written release or a written report, you avoid the back-and-forth of questions, some of which could be quite probing. And I think, I think the DNI would like to avoid that and avoid the risk of saying something that might incur the wrath of the President," Clapper said on Saturday.

"I think this is a terrible thing with respect to the need to inform the electorate about what foreign nations are doing to interfere in our political process, most notably the Russians," added Clapper, a CNN contributor.

CNN has reached out to committee officials for comment.

Earlier this month, Evanina released an unprecedented statement saying China "prefers" an outcome where President Donald Trump is not reelected in November and Russia is working to "denigrate" Biden's White House bid.

"We assess that China prefers that President Trump -- whom Beijing sees as unpredictable -- does not win reelection," he wrote. "China has been expanding its influence efforts ahead of November 2020 to shape the policy environment in the United States, pressure political figures it views as opposed to China's interests, and deflect and counter criticism of China."

"We assess that Russia is using a range of measures to primarily denigrate former Vice President Biden and what it sees as an anti-Russia 'establishment.' This is consistent with Moscow's public criticism of him when he was Vice President for his role in the Obama Administration's policies on Ukraine and its support for the anti-Putin opposition inside Russia," Evanina added.

Evanina also stated that Iran is seeking to "undermine US democratic institutions, President Trump, and to divide the country."

At the time, Pelosi and Schiff said Evanina's statement improved on the previous warning about foreign election interference he issued in July, but "still treats three actors of differing intent and capability as equal threats to our democratic elections."

In a joint statement, the top Republican and Democrat on the Senate Intelligence Committee, Rubio and Warner, thanked Evanina for providing the additional information about the threats and encouraged the intelligence community to "continue to make this information available."