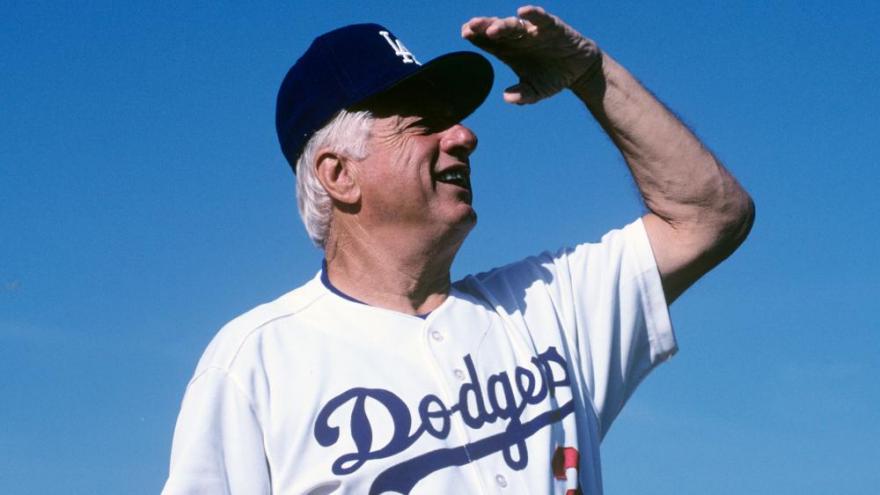 Los Angeles Dodgers manager Tommy Lasorda, pictured here checking the spring training baseball crowd before a game in 1993 in Vero Beach, Florida, passed away on Jan. 7 at the age of 93.

(CNN) -- Tommy Lasorda, who spent seven decades in the Dodgers organization -- first as a player in Brooklyn and then in Los Angeles as a two-time World Series winning manager -- has died. He was 93.

Lasorda had a sudden cardiopulmonary arrest while home Thursday evening. Less than an hour later, he was pronounced dead at 10:57 p.m., the team said in a statement.

"Regarded by many as baseball's most popular ambassador, Lasorda spent 71 seasons in the Dodger organization with Dodger Blue running through his veins," the team said.

Lasorda was known for his unbridled love for the Dodgers. In an interview with CNN in 2013 at Dodger Stadium, Lasorda said simply, "I love this place."

"Sometimes I sit here and I can't believe it. Blue heaven on earth," he said. "I used to say 'Hey, if you want to get to heaven, you gotta go through Dodger Stadium'."

He loved it so much, he said, he wanted to be buried beneath the pitcher's mound -- the position he used to play.

"And when some little ol' left-hander's out there struggling, he'll hear a voice. 'Slow down, son. Concentrate. You can do it. You gotta believe in yourself.' And he'll look around (and say), 'Someone's talking to me! Where? Who's this guy talking to me?' And it'll be Tom Lasorda, underneath that pitching mound," the Hall-of-Famer, a lefty pitcher himself, told CNN.

The tributes are pouring in for the man, whose #2 jersey was retired by the team in 1997.

Dodgers owner and chairman Mark Walter said, "He was a great ambassador for the team and baseball, a mentor to players and coaches, he always had time for an autograph and a story for his many fans and he was a good friend. He will be dearly missed."

"Tommy would get up in the morning full of beans and maintain that as long as he was with anybody else," he said.

Lasorda is survived by his wife of 70 years, Jo; their daughter, Laura, and granddaughter Emily Tess.