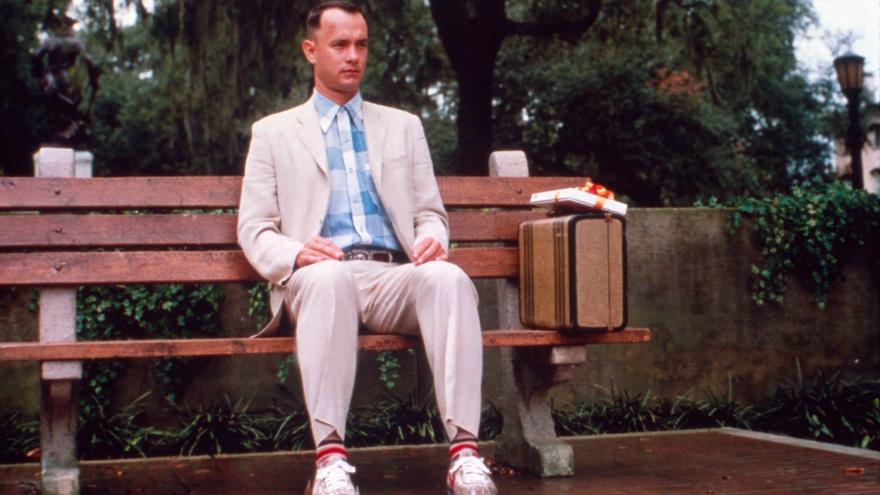 (CNN) -- Tom Hanks has revealed how he didn't think the iconic bus bench scenes in smash hit movie "Forrest Gump" would make it into the final cut.

Hanks played the title character, a man with child-like innocence and a penchant for stumbling into history, in the 1994 movie directed by Bob Zemeckis, which won six Academy Awards.

"I will tell you, in 'Forrest Gump,' all the stuff that we shot on the park bench in Savannah, Georgia ... we were just shooting fodder for a possible narrative piece of it," Hanks told the ReelBlend podcast during a promotional interview for his new movie "Elvis" earlier this month.

"And I said to Bob [Zemeckis], 'Is anyone going to care about this nut sitting on a [bench]? What is this? No one knows what's in this thing I mean,'" said Hanks.

"We ended up shooting, it was probably like, you know, 13 pages of dialogue that we had to shoot in a day and a half," he added.

"It was written on cue cards ... I didn't need the cue cards after a while because you get into it," Hanks said, before explaining what Zemeckis told him about the bus bench scenes.

The scenes became an important part of "Forrest Gump," which earned $677 million around the world and is hailed by many as a modern classic, filled with homespun catchphrases like, "My momma always said life was like a box of chocolates. You never know what you're gonna get."

In the years since "Forrest Gump," Hanks has gone on to even more acclaim, both in front of and behind the camera, with roles in films like "Saving Private Ryan," "The Da Vinci Code" and "Charlie Wilson's War," which he also produced.

Now Hanks is promoting director Baz Luhrmann's "Elvis," based on the life of rock and roll superstar Elvis Presley, in which he plays Presley's manager Colonel Tom Parker.