Tom Brady vs. Patrick Mahomes is a Super Bowl matchup that spans the ages 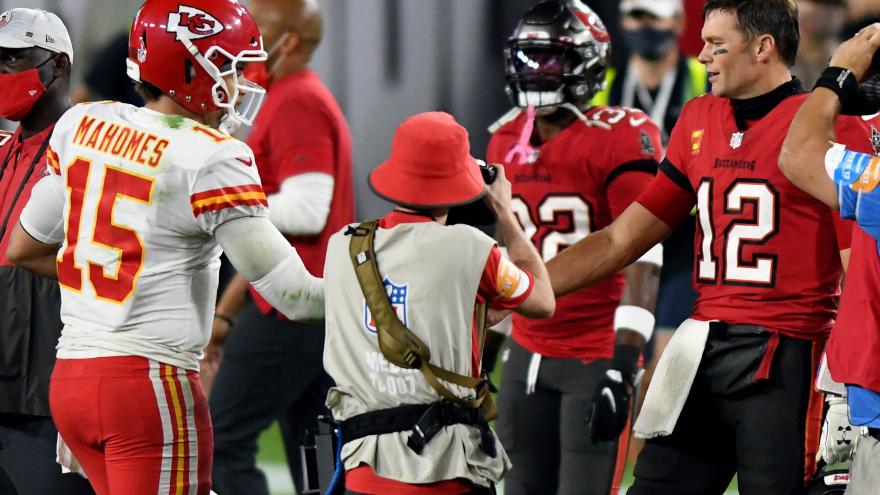 (CNN) -- A lot of numbers get thrown around during Super Bowl week.

That's the age gap between 43-year-old Tom Brady and 25-year-old Patrick Mahomes. When the Tampa Bay Buccaneers and Kansas City Chiefs take the field for Super Bowl LV, it will be the largest age difference between two starting quarterbacks in Super Bowl history.

Super Bowl LV arguably has one of the most intriguing quarterback matchups of all time with Brady, who is in his first year with the Buccaneers after spending 20 seasons -- and winning six Super Bowls -- with the New England Patriots, and Mahomes, who in his fourth season aims to become the youngest starting quarterback to win multiple Super Bowl titles.

Mahomes and the Chiefs also are looking to become the first team to win back-to-back Super Bowls since Brady and the Patriots won Super Bowls XXXVIII and XXXIX in the 2003 and 2004 seasons.

"As I continue in my career, I am still trying to do whatever I can to watch the tape on him," Mahomes, last year's Super Bowl MVP, said this week of Brady. "Because he is doing it the right way, and you can tell by how many Super Bowl championships he has, and the rings on his fingers."

Additionally, this is the first Super Bowl between starting quarterbacks who have each won at least one Associated Press MVP Award and one Super Bowl MVP Award prior to the matchup.

"I really admire Patrick for the kind of player he is," Brady, a four-time Super Bowl MVP and three-time regular-season MVP, said to reporters this week. "He has great command of his team. I know his teammates love playing with him. He's got great charisma. I think when I see Patrick, I see someone who, you know, none of these moments are too big for him."

Brady's words of encouragement 'put that stamp' on Mahomes

According to NFL statistics, Mahomes (44-9, .830) and Brady (263-80, .767) have the highest and third-highest winning percentages, respectively, among starting quarterbacks (minimum 50 starts) since 1950, including the postseason.

This will be their fifth career meeting against one other, and they're even at 2-2. In their most recent matchup, Mahomes got the best of Brady in Week 12 of this season, with the Chiefs winning 27-24 at Raymond James Stadium -- the site of Sunday's game -- in Tampa, Florida.

The last time Brady won over Mahomes was in the AFC title game at Arrowhead Stadium on January 20, 2019, when the Patriots defeated the Chiefs 37-31 in overtime.

"This was an incredible win," Brady said that day. "I will remember this one for the rest of my life."

But before Brady went on to win his sixth Super Bowl -- and becoming the oldest quarterback to do so, when he was 41 -- the then-Patriots quarterback found Mahomes and spoke to him after the AFC championship game.

"Him coming to say that he respected what I was doing and how I was playing on the field and the type of person I was, it put that stamp on me that I had to go in and be even better, in order to get to the Super Bowl, which we did last year," Mahomes, who would be named the NFL MVP that season, said of their conversation. "I was just trying to keep improving and getting better every single day."

Said Brady: "I think he's only elevated from that point on."

Brady's 'been around for a while'

Last week, Mahomes was asked if he remembered how old he was when he had his first memory of Brady.

"It was probably September 17, 1995, when I was born," the Chiefs quarterback wisecracked. "He's been around for a while."

In the year of Mahomes' birth, his father, Pat Mahomes Sr., was in the midst of his career as an MLB pitcher. That also was the year Brady graduated from high school -- and when he was selected by the Montreal Expos in the 18th round of the MLB draft. In 2000, when Mahomes was 4 years old, the Patriots took Brady in the sixth round of the NFL draft, at No. 199 overall.

A lot has transpired since, and it's a severe understatement to say that football has worked out well for both quarterbacks. But will Super Bowl LV potentially be the last time these two -- an established all-time great vs a budding one -- go against each other? Not so fast.

"They said that the last game that we played was going to be the last time that we played, so I'm sure he'll have something to say about that, trying to make Super Bowls, and I'll be trying to make more, too," Mahomes said this week. "I'm definitely excited for this opportunity to go up against him and against that team. It's going to be a great game. I'm glad that we're back in this game and getting a chance to win another Super Bowl."

Brady, who previously has said he wants to play until he's 45, was asked Monday if he might play beyond that considering the level he is at now.

"Yeah, definitely," Brady said. "I would definitely consider that. It's a physical sport and just the perspective I have on that is you never know, kind of, when that moment is just because it's a contact sport. There's a lot of training that goes into it. It has to be 100% commitment from myself to keep doing it."