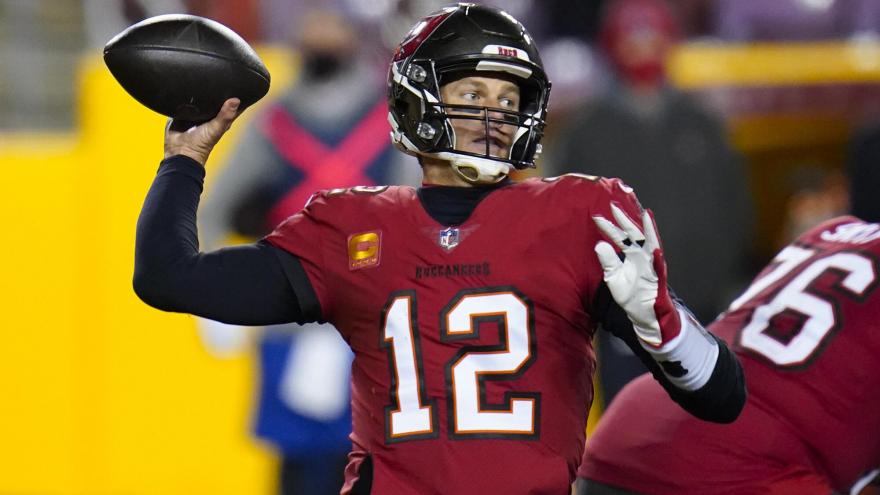 Tampa Bay Buccaneers quarterback Tom Brady throws a pass in the second half of the NFL wild-card playoff game against the Washington Football Team on January 9, 2021.

(CNN) -- The sports world already knows Tom Brady as the greatest quarterback of all time, but he proved it to Tampa Bay this weekend after leading the Buccaneers to their first playoff win since 2002.

Simply beating the Washington Football Team would be impressive, but pair it with the fact that the Bucs have not even made a playoff appearance since 2007 and it adds a little more weight.

"Come on, that's Tom Brady," Bucs running back Leonard Fournette said after Saturday's game. "I ain't gotta think too much about that. That's the boy. ... We've got faith in him. We're going to protect our butts off for him to make sure he gets that throw. So that's our job."

Brady completed an impressive 22 of 40 passes for 381 yards and was responsible for two touchdowns.

Still, Brady couldn't do it without his teammates. Wide receiver Mike Evans led the team with six catches for 119 yards, and he did it after a questionable start.

"Mike played his butt off," Brady told the media after the game. "He got hurt last week. We weren't sure whether he was going to go or not. (He) just did an incredible job fighting through it and made a bunch of big plays when we needed it."

The Buccaneers' next opponent will be decided Sunday. They will either host the Rams or face the Saints in New Orleans.

"It's huge," said head coach Bruce Arians in his news conference. "I just wish we could play at home, but we can't unless certain things fall. And then I wish the stadium would be packed."