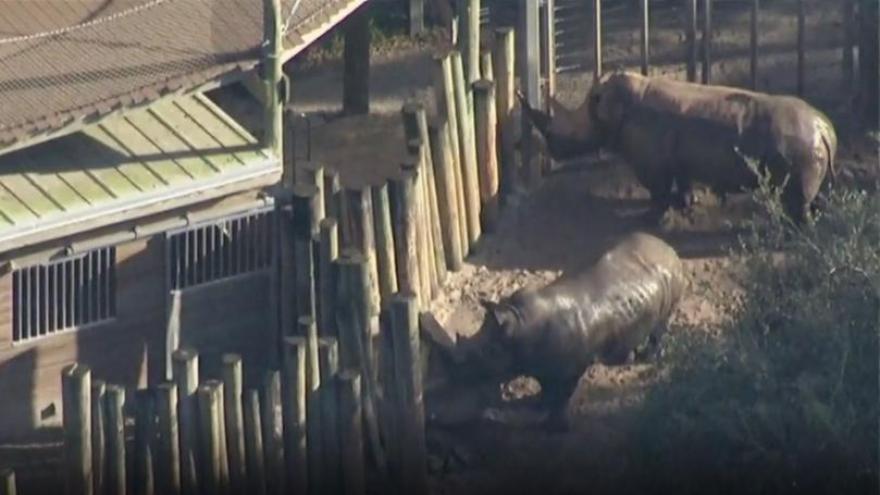 (CNN) -- A 2-year-old girl is recovering after she was injured at a Florida zoo during a private rhino encounter experience, zoo officials and her family said.

The toddler and her family were taking part Tuesday in a close-up experience with white rhinos at the Brevard Zoo in Melbourne, Florida, when the girl stumbled and came into contact with at least one of the animals, zoo officials said.

The family of three had been given access to feel and brush the rhinos while supervised by two zookeepers in an area of the zoo where they were separated from the animals only by steel posts.

As two female rhinos approached the toddler, the snout of one made contact with the child and she got bumped, Hill said.

The child's father, who was holding on to her throughout the incident, quickly pulled her out and carried her to the front office, the zoo said. The girl was taken to a pediatric hospital.

Zoo officials don't know the nature or cause of the girl's injuries, including whether they stemmed from the fall or contact with an animal, Winsten told CNN.

"We don't think any contact was made with their horns or their hooves because dad picked her up right away," he said. "We have been told by the family they expect her to fully recover, and obviously our first concerns are for her."

Winsten said he didn't know how the woman's arm was hurt.

"I do know that if (at) any time you reach though poles ... your arm gets banged against the pole," Winsten said. "So, that's what we suspect happened to her arm, but we're not sure the nature of that."

The girl's father on Wednesday described the ordeal as "a trying day for our family," according to a statement released on his behalf by Orlando Health.

"We're thankful to everyone who has reached out with their concerns," he said. "Our daughter is in good care at Arnold Palmer Hospital (for Children) and is doing well. My wife was also treated for her injury and has been released from the hospital. At this time, we ask for privacy as we focus on our daughter's recovery."

Zoo will consider changes to the barrier

Rhino encounters and "all other premium animal experiences" have been suspended until a safety review is completed, zoo officials said Wednesday in a statement. The Florida Fish and Wildlife Conservation Commission also is investigating, they said.

During the safety review, zoo officials will consider changes they could make to the pole barrier, Winsten said.

"Probably, we'll add some horizontal pieces which would prevent" people from slipping or squeezing between the vertical poles, he said.

During the incident, the rhinos' welfare "was never compromised and they will not be 'punished' in any way," the zoo officials' statement reads.

The rhino experience has been offered daily since 2009, and no other incidents have been reported, the zoo said.

The Brevard Zoo, which houses more than 900 animals, is about 55 miles southeast of Orlando.