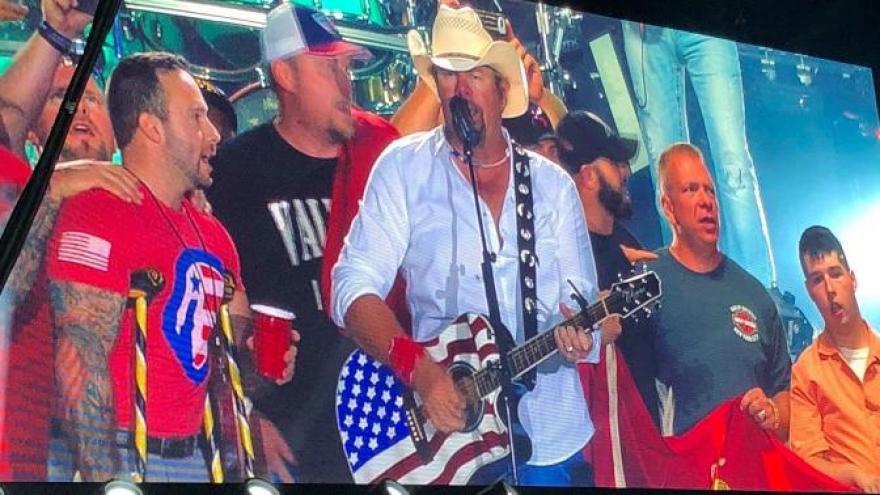 Before Toby Keith took the stage for his concert in Pittsburgh on Friday, he had a special gift for retired Marine Corporal Brandon Rumbaugh. Rumbaugh lost both his legs in Afghanistan when he stepped on an IED while carrying a fellow injured Marine.

(CNN) -- Before Toby Keith took the stage for his concert in Pittsburgh, he had a special gift for retired Marine Corporal Brandon Rumbaugh.

While serving in Afghanistan in 2010, Rumbaugh was carrying a fellow Marine to safety when he stepped on an IED resulting in the loss of both his legs. After being fitted with a prosthetic he told CNN in 2012 that he worked hard for two years to beat the odds and walk again. Since then he has become a motivational speaker, sharing his story with others.

On Friday before the start of Keith's show at Highmark Stadium in Pittsburgh, Rumbaugh was presented with an all-terrain wheelchair, courtesy of the country singer and a veterans' nonprofit.

Rumbaugh told CNN affiliate WPXI he wanted this type of wheelchair because it will allow him be more active outdoors and play with his six-month-old daughter.

The Independence Fund, a nonprofit that assists wounded veterans, teamed up with Keith to give Rumbaugh the $16,000 wheelchair, along with backstage passes and a meet and greet with the singer.

As Rumbaugh was leaving the stage in his new wheelchair, the crowd started chanting "U-S-A!" The Marine enjoyed the concert from the side of the stage and even joined Keith onstage during his performance of "American Soldier."

It's not the first time Keith has made such a gesture. Last month, he and the Independence Fund presented wounded veteran Christian "Chris" Fleming with a wheelchair at Keith's concert in Highland Heights, Kentucky.