To my son, born in the time of coronavirus and climate change 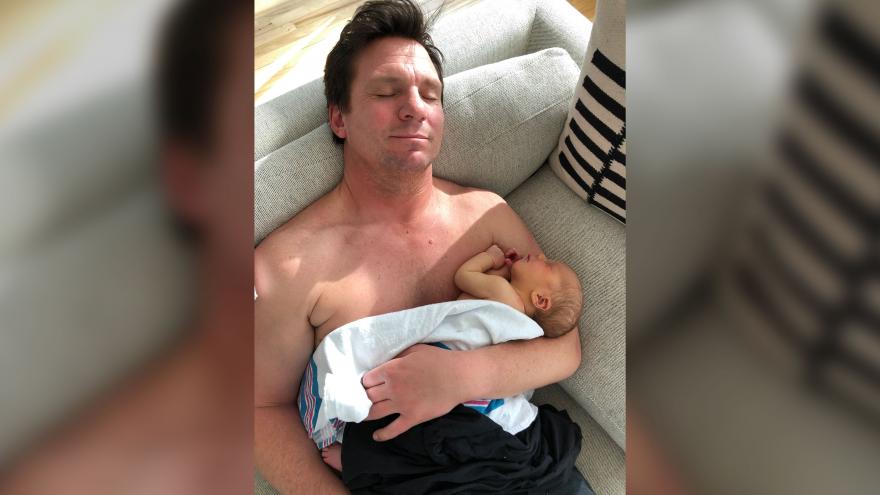 Against all odds you were conceived in a lighthouse, born during a pandemic and will taste just enough of Life as We Knew It to resent us when it's gone.

I'm sorry we broke your sea and your sky and shortened the wings of the nightingale.

I'm sorry that the Great Barrier Reef is no longer great, that we value Amazon™ more than the Amazon and that the waterfront neighborhood where you burble in my arms could be condemned by rising seas before you're old enough for a mortgage.

The scent of your downy crown makes my heart explode. The curl in your Tic Tac toes fills me with enough love to power New York City.

Instead, the milk in your bottle was warmed by dirty, ancient fuels and as a result, you will learn to walk on a planet that has never been this hot for humans.

We are just now wrestling with the implications of this but as your Pop, the most poignant evidence was seeing your mother give you your first kiss through a P100 mask that smelled faintly of smoke. I'm sorry my boy, but we were warned.

See, for decades, scientists told us that if we weren't careful, humans would unleash an invisible enemy out of the jungle and into our lungs. But that was a story few wanted to believe. 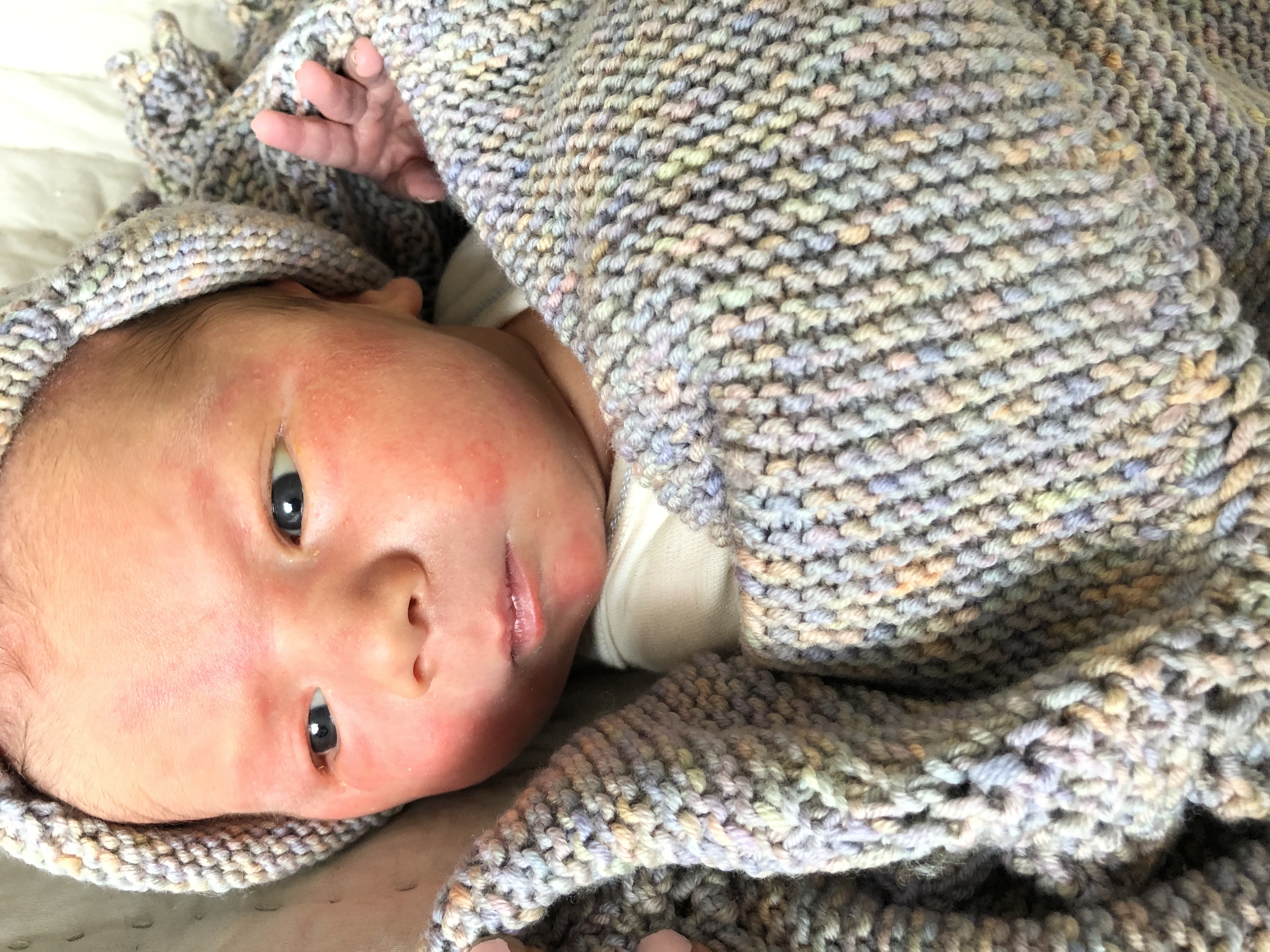 So we kept cutting down jungles -- and prairies and mangroves and the last few the places where the wild things are -- to pave and plow, develop and devour everything inside.

When we finally realized that the worried scientists were right, people got scared and went searching for potions and protections. They emptied store shelves even faster than the jungles and all the invisible enemy masks were gone.

Just in time for your birth.

Your Mom and I were so scared that I was just about to swallow hard and pay a faceless, soulless internet profiteer $600 for a 50-cent N95 when I remembered the mask I used to protect my lungs from a fiery place called California.

It might have saved your Mom from the virus, so I still keep it next to my hurricane waders, malaria pills and the bulletproof vest with the patch that reads "PRESS."

If I have to pack them and kiss you goodbye more often than you'd like, I'm sorry. But we were warned.

For generations, scientists told us that if we weren't careful, a different kind of invisible enemy would come out of our farms, factories, homes and cars, get into the sea and the sky and end Life As We Know It ... but that was a story too few wanted to believe. Including me.

But like today's coronavirus, carbon dioxide and methane molecules don't care what we believe. The laws of physics have no regard for how we vote or what we worship.

So this will be your first life lesson, little River: We are human and unlike all the other animals, we are made of stories.

Our big brain's ability to imagine different realities and communicate wild new ideas to our children, neighbors and millions of strangers is what makes us the most powerful force in the known universe. Stories!

If the lifespan of our 4.5 billion-year-old planet was scaled down to my age, Homo sapiens showed up about three months ago. The Industrial Revolution began when you started reading this letter and in that blink of Earth time, your species went from cave monkeys to demigods. We rose from bands of insignificant hunter-gatherers at the mercy of nature to city-building, river-bending, mountain-moving masses with weapons and tools that grow mightier by the hour.

Along the way, EVERYTHING in our man-made world -- flags and borders, money and markets, laws and religions -- all of it came from the stories we tell ourselves. Some are older than others. They vary by time and place. And all of them are under constant revision.

Take your Grandma Pat. She believed the stories in a very old book with such passion, we followed her dreams from our home in Wisconsin all over the Bible Belt where the heroes were Jesus, cowboys and oilmen.

So we burned gasoline for no good reason. We left Prosperity Gospel megachurches, tied a rope to a dirt bike and belly-surfed across a sod farm. We rooster-tailed across Lake Tenkiller on two-stroke Jet Skis and cruised mall parking lots in muscle cars singing "The road goes on forever and the party never ends."

Turns out that it doesn't, and it does. I'm sorry.

Meanwhile, every Christmas and summer vacation I'd go visit your Grandpa Bill in the mountains of Colorado and as we hiked, paddled and explored, I'd hear very different stories with heroes like John Muir, Edward Abbey, Rachel Carson and Eunice Newton Foote.

She was an artist and scientist and one day as she filled glass cylinders with different gasses and put them in the garden sun, she discovered that carbon dioxide traps more heat than air.

"An atmosphere of that gas would give to our Earth a high temperature," she wrote.

But in 1856, few paid attention to scientists in skirts. She needed a kind man to present her findings in papers and conventions because, get this, women couldn't even vote (Eunice was also something called a "suffragette" so she helped change that ridiculous story).

Even as plenty of men duplicated her finding, few wanted to think about the dirty secret of fossil fuel because we were too busy burning it to build a rich, glorious and comfortable world.

But we were also building an invisible greenhouse in the sky.

Thanks to all that heat-trapping gas, our oceans are absorbing as much extra heat as five Hiroshima-sized atomic bombs every SECOND of every day.

Since 1961, our planet has lost the equivalent of a block of ice the size of the United States, 16 feet thick.

And on Independence Day 2019, 156 years after she put her glass tubes in the garden sun, Anchorage was hotter than Key West.

Just like the virus hunters, Eunice Newton Foote was right. Way back when I was cruising the mall in an '80s mullet, big oil companies KNEW she was right and predicted with eerie precision just how screwed we would be.

But some stories take a long time to catch on, especially when they challenge everything we think is glorious about being human.

Especially when they have to compete with fear, greed and the lies they breed.

In the year before you were born, I took a road trip across America. With science as my map, I set out from the Florida Keys to Alaska, from the heartland to burnt Paradise, all to imagine how unnatural disasters will change our future. I met farmers, firefighters and fishermen, politicians, protesters and paleoclimatologists and I came home completely rattled.

Because the American Way of Life that I grew up with is already gone. The Goldilocks climate that allowed humanity to thrive is in the past. And nobody seems to know it yet.

If we follow the warnings of science and do everything possible to spare your generation maximum pain, it will mean completely new forms of power, food, construction, transportation, economics and politics. It will mean landscapes covered in solar panels, windmills and carbon capture plantations and the kind of intimate relationship with our land and water that went the way of the hunter/gatherer.

And if we do nothing? It will mean the end of predictable growing seasons, flight schedules and supply chains, resource wars and tens of millions of climate refugees changing everything we know about borders, neighbors and strangers.

And either scenario will bring out both the absolute best and worst in human nature: Hero first responders, innovators and leaders as well as mendacious grifters, conspiracy theorists and tyrants.

There's no telling which side will prevail so it's no wonder some believe that bringing you aboard this sinking ship was selfish, immoral and hypocritical.

But if we give up on our most primal job we have as humans, haven't we already lost?

The day I saw your face for the first time, I went from the ultrasound to a climate march led by Greta Thunberg. You'll be able to read volumes on how she was both canonized and demonized but back then she was just a girl the age of your sister, painfully shy when we met with that hand-painted Swedish protest sign tucked under one thin arm. But she was curious enough to digest those warnings from the scientists and honest enough to call out the arrogant ignorance and ignorant arrogance of all the grown-ups in charge.

I hope you carry the same superpower because that post-ultrasound march gave me a rare shot of hope. It was walking, breathing, traffic-stopping proof that the story might be changing.

So, you will be raised to be engaged. To realize that the strongest societies pull together BEFORE disaster strikes. You will treat believers and deniers with equal empathy, understanding that we are all just products of the stories we are told.

And as a tool kit, I promise to fill you with lessons I've collected from the happiest, healthiest, most resilient societies in the world: Native American fire skills and Dutch water management and secrets from the Blue Zone island in Greece where people forget to die.

You'll need every indigenous trick in the book as citizens of the modern world are forced to realize that EVERY DAY is Earth Day.

Your Grandma Pat would call you a miracle baby sent from God.

Grandpa Bill would chalk you up to a glorious twist of biological fate because we thought we were too old to become new parents. You were the last thing we imagined on a vacation to Croatia, where your Great Grandpa Frank was born and we found a Dubrovnik lighthouse on Airbnb.

Until you know what it's like to fall in love, the story will make you blush and squirm, but I can think of no better omen for the kind of boy we hope to raise.

The lighthouse keeper is vigilant and dependable, with a reverence for nature's power and a commitment to saving lives. This is your destiny, my beautiful River.

The great thing about stories is that they are always under revision. Now go write a happy ending.