Tiny tooth fills in gaps in the human family tree 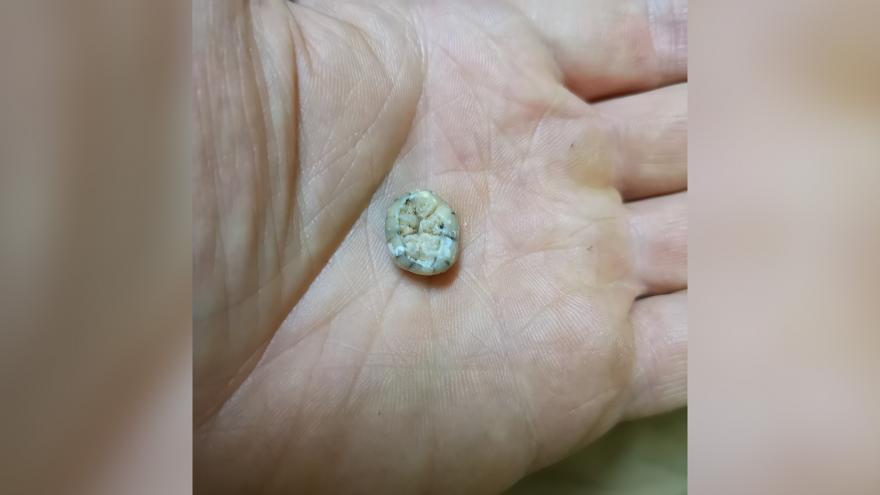 (CNN) -- Have you ever wondered whether, tens of thousands of years from now, you could end up in the fossil record? I confess I have.

It's definitely a long shot. The vast majority of animals that have lived on the planet don't end up encased in stone or with their skeletons preserved in sediment.

But if a body part were to survive for posterity, a tooth is a likely contender. Incredibly hard, our choppers withstand the ravages of time.

Plus, human teeth are a treasure trove of information about human evolution, as evidenced by one of this week's thrilling discoveries, a molar unearthed in a cave in Laos.

I'm Katie Hunt, standing in for Ashley Strickland, in this edition of Wonder Theory.

If you run your tongue over the molars in your mouth, you can feel crests and dips. For archaeologists, these features are a bit like fingerprints. They allow experts in human evolution to identify and distinguish our different ancestors.

A lower molar discovered in sediment in Cobra Cave in Laos belonged to a young woman who lived at least 130,000 years ago. What's even more exciting is she might have been one of the Denisovans,an enigmatic group of early humans that was onlydiscovered in 2010. Much is still unknown about them.

The tooth is the first fossil evidence placing this population of early humans in Southeast Asia and helps fill in some puzzling gaps in our family tree.

Three cheers for the Mars InSight lander. It's set to retire this summer after completing its mission to study the mysterious interior of the red planet, NASA announced this week.

Martian dust is accumulating on the stationary lander, which makes it harder for sunlight to charge the solar panels that power InSight.

It's going out on a high note: Earlier this month, InSight made perhaps its biggest discovery -- the largest quake ever detected on another world.

The data collected by InSight has revealed new details about the little-known Martian core and mantle, the layer below the crust and above the core. The lander has also recorded weather data and analyzed the remains of the magnetic field that once existed on Mars.

We've long known that dolphins are some of the smartest creatures on the planet. They can use tools, mourn their dead and communicate. Their latest scientifically documented feat is harnessing the healing properties of coral, using a reef a little like one would a medicine chest.

Bottlenose dolphins living in the Red Sea have been observed taking turns rubbing up against specific reef organisms, which release mucus rich in bioactive compounds that could help protect dolphin skin from infections and rashes.

It's the first time this type of behavior has been witnessed in cetaceans -- the scientific order of marine mammals that includes dolphins, whales and porpoises.

Despite its advanced age and distance 14.5 billion miles (23.3 billion kilometers) from Earth, it continues to operate. It can receive and execute commands sent from NASA, as well as gather and send back science data.

However, Voyager 1 has started sending back information from space that's mystifying NASA. Data readouts from the probe's instruments seem random or impossible.

The Voyager team is working hard to understand the source of the strange glitch.

Ever wondered what happens to your hair after it's snipped off at the salon? Some of it might be used to soak up oil spills.

Human hair can absorb around five times its weight in oil and is an environmentally friendly alternative to the standard way to clean up land-based oil spills, a process that typically involves polypropylene mats made from a non-biodegradable plastic.

San Francisco-based nonprofit Matter of Trust makes the absorbent hair mats from cuttings sent by salons, pet groomers and individuals. The hair is checked for contaminants such as debris, dirt or lice, then separated, spread over a frame, and run through a custom-built felting machine.

-- A tiny Amazonian fish found only in one stream could go extinct -- just after being discovered.

-- Ancient poop has revealed what the builders of Stonehenge liked to eat during winter feasts.

-- It was World Bee Day on Friday. Here are six thingsthat might surprise you about nature's hard-working pollinators.