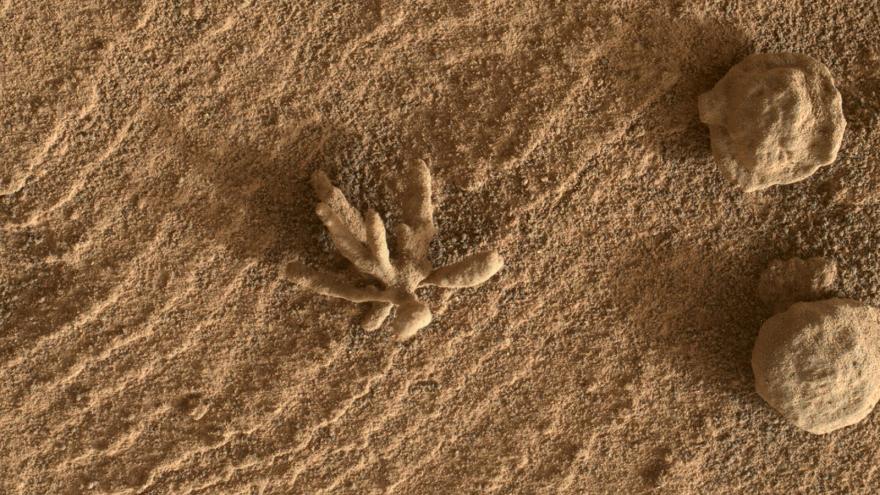 (CNN) -- This may be the closest we will ever come to finding a flower on Mars.

During its ongoing investigation of Martian rocks in Gale Crater, the Curiosity rover stumbled on a tiny surprise. The rock artifact, which resembles a piece of coral or a flower, is smaller than a penny.

The Martian "flower" and the spherical pieces next to it were likely "made in the ancient past when minerals carried by water cemented the rock," according to NASA.

Curiosity took an image of the little rock arrangement on February 24 using the Mars Hand Lens Imager, a camera located on the end of its robotic arm.

The find is similar to other small features Curiosity has spotted in the past, all of which were formed "when mineralizing fluids traveled throudagh conduits in the rock," according to the agency. Previously, the Opportunity rover also spotted Martian "blueberries," little mineral spherules indicative of once watery soil on the red planet.

Each image Curiosity collects and shares of these features is helping researchers piece together the chronology of water's presence in the crater.

A decade of exploration

Later this year, Curiosity will celebrate a major milestone: a 10-year Martian anniversary. Curiosity landed on the red planet on August 5, 2012. It has been exploring the crater, and the Mount Sharp feature at the crater's center, for the past decade.

The mission was designed to determine whether Mars was ever habitable for microbial life. Early on, the aptly named rover discovered the chemical and mineral evidence affirming the planet's habitability sometime in its distant past. Ever since, Curiosity has been investigating the geologic record to understand when Mars might have been most suitable to host life.

Curiosity continues to pick its way across sharp boulders and ridges and collect rock and soil samples for analysis.

The car-size rover paved the way for the Perseverance rover and Ingenuity helicopter, which are currently exploring Jezero Crater, located 2,300 miles (3,700 kilometers) away and will eventually return the first Martian samples to Earth through future missions. The combined efforts of these rovers could help answer the ultimate question of whether life ever existed on Mars.