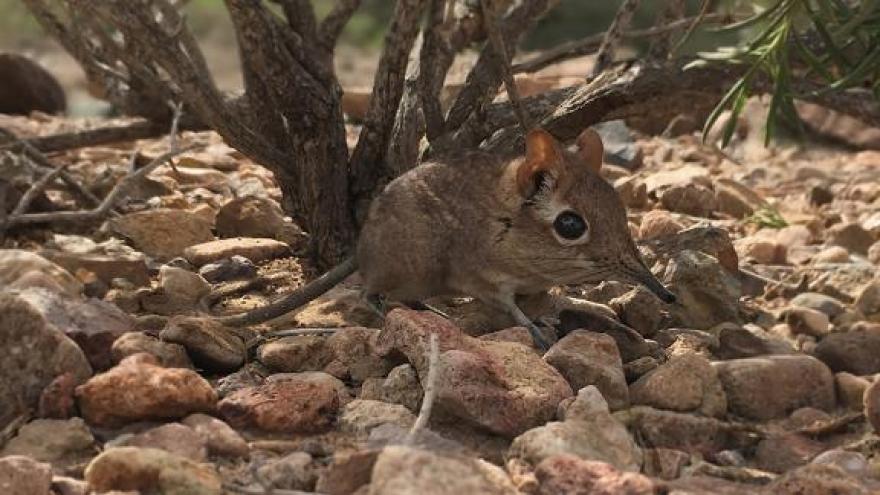 (CNN) -- Scientists working in the Horn of Africa have documented the existence of a remarkable little mammal called the Somali elephant shrew -- or Somali sengi -- for the first time since the 1970s.

While local people were aware that the mouse-sized critters lived in the area, there was no scientific information on their populations, according to research from Duke University published Tuesday.

The Somali sengi uses its nose to sift through leaf litter in search of insects to eat, Duke researcher Steven Heritage told CNN.

Strangely it is neither a shrew nor a mouse, but is instead closely related to elephants, aardvarks and manatees, all of which have similar trunks.

Humans are more closely related to shrews and mice than elephant shrews are, said Heritage.

Another interesting trait is the animal's long hind limbs, which means they are highly adapted to running.

"The proportions of their hind limbs are closer to antelopes or gazelles than they are to other small mammals," said Heritage, who added that some species of sengi can run at up to 30 kilometers per hour (18.6 miles per hour).

"It's really a fascinating combination of mammal traits that aren't really found in any other order of mammals," he said.

"In the scientific community we try to use a reserved language that would classify the animals as 'charismatic microfauna,' which translates from science speak to normal speak as 'adorable little animals.'"

During a research trip to Djibouti in early 2019, a team including Heritage, Galen Rathbun from the California Academy of Sciences and Houssein Rayaleh from Association Djibouti Nature set out to see if they could find the tiny mammal.

The team set more than 1,200 live-traps using bait made from peanut butter, oatmeal and yeast -- a far cry from the sengi's normal diet of ants and termites, but Heritage explained why it's not such a strange choice.

"You can imagine if you're a small mouse-sized mammal in the super-arid desert rocky landscapes and you smell something one night that smells like Marmite and peanut butter, you're gonna go to check that out," he said.

In a paper published Tuesday in the journal Peer J, the team concluded that not only was the Somali sengi more common than thought, it lives over a larger area that covers Somalia and Djibouti, and potentially Ethiopia.

Heritage believes that the lack of urban development and widespread agriculture in the arid areas the Somali sengi calls home is good news for the animal.

Heritage plans to return to the Horn of Africa next year to place radio tags on some of the animals in order to work out more about where they live, how much space they use and how pairs are formed.