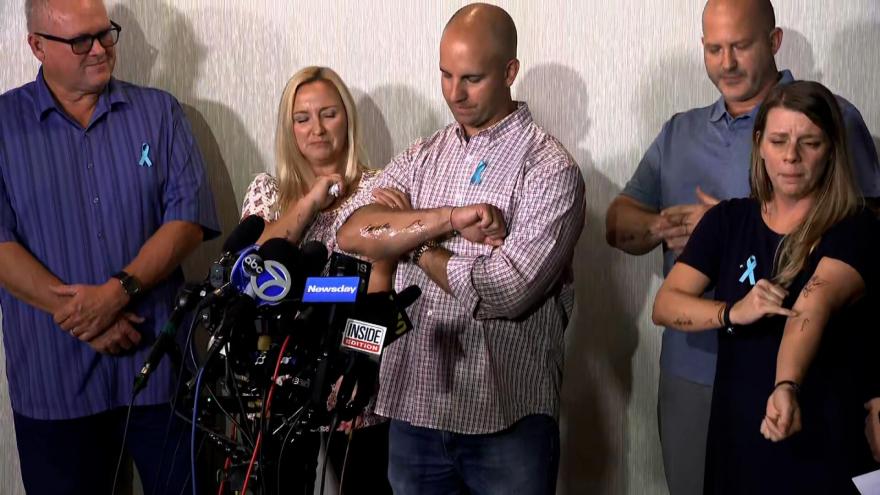 Gabby Petito's parents and stepparents showed they got matching tattoos in her memory at a news conference on Tuesday, September 28.

(CNN) -- The FBI visited Brian Laundrie's family home in North Port, Florida, again on Thursday afternoon amid the ongoing search for him.

Two FBI agents arrived to the home in a black SUV and brought a large brown paper bag inside. They did not depart with the same bag. One agent also briefly climbed into a camper van parked on the property.

Steven Bertolino, the Laundrie family attorney, told CNN the FBI was there to collect items which could assist them in the search for Brian.

"The FBI is at the Laundrie home today to collect some personal items belonging to Brian that will assist the canines in their search for Brian," he said. "There is nothing more to this."

The home visit comes amid the weekslong search for Laundrie, whose parents told authorities they last saw him on September 14 when he left home to go to a nearby nature reserve. His fiancée, Gabby Petito, disappeared late last month and was later found dead in Wyoming near where the couple had last been seen together.

Police records obtained by CNN show authorities responded to multiple calls for service at Laundrie's Florida home around the time Petito was reported missing by her family in New York. Those records show two calls for service were made at the home September 10 -- the day before Petito was reported missing -- and three more calls on the day of the missing persons report.

Those calls were were placed by Petito's father, who was attempting to report her missing, North Port police spokesperson Josh Taylor said. Six additional calls for service to the Laundrie home were made between September 15 and 17, records show. Brian Laundrie's parents told police September 17 they had last seen him three days earlier.

All of the calls were made to a non-emergency number and not 911. Bertolino, the Laundrie family attorney, declined to comment.

Though authorities have not explicitly connected Laundrie to Petito's death, they are looking for him, in part as a response to a federal arrest warrant accusing him of illegally using another person's debit card.

The sequence of events since he returned to Florida without her on September 1 has also been clarified further in recent days. Prior to his disappearance -- before Petito was reported as missing -- Laundrie went camping with his family at a campground dozens of miles from their home between September 6 and 8, officials said.

In addition, on September 4, Laundrie purchased a cell phone at an AT&T store in North Port, Bertolino told CNN. The attorney said the phone was not a "burner phone" and that it required the opening of an account, adding Laundrie left that phone at home "the day he went for a hike in the preserve on September 14, 2021 and the FBI now has that phone." It is unclear what happened to Laundrie's previous phone.

AT&T referred questions about the purchase to law enforcement.

A publicly known timeline of Laundrie's movements this month, along with case milestones, looks like this:

September 1: He returned from the cross-country road trip, without Petito, to the home he shared with his parents in North Port, according to police.

September 6-8: The Laundrie family stayed at Fort De Soto Campground, about 75 miles from their home, county officials said. Brian's mother, Roberta Laundrie, was checked in at a waterfront site on these dates, according to a Pinellas County Parks campground check-in report provided to CNN.

The FBI is in possession of surveillance video from the park from that time frame, a spokesperson for the Pinellas County Sheriff's Office said.

The weekend of September 10: This was the last weekend that a neighbor of the Laundries, Karyn Aberts, says she saw Brian Laundrie at his home.

September 11: Gabby Petito's family reports her missing after not being able to get in touch with her. North Port authorities go to Laundrie's home that night and ask to speak with him and his family, but are "essentially handed the information for their attorney," Taylor, the city police spokesperson, has said.

September 14-17: Laundrie's parents have said they last saw him leaving their home, with a backpack, on September 14, and that he said he was going to a nearby sprawling nature reserve, according to police. The parents told police this on September 17, three days after he allegedly left, police said.

September 19: Petito's remains are found in Wyoming's Bridger-Teton National Forest. A coroner later made an initial ruling that her death was a homicide.

As for the Florida campground that the Laundrie family visited in early September, the Pinellas County Sheriff's Office said it is not currently investigating at the campground, and it is "unaware of any confirmed sightings of Brian."

On Tuesday, an attorney for Petito's family expressed skepticism that Laundrie's parents would help in the FBI's ongoing search for him.

"The Laundries did not help us find Gabby. They're sure not going to help us find Brian," family attorney Richard Stafford said. "For Brian, we're asking you to turn yourself in to the FBI or the nearest law enforcement agency."

Speaking at a news conference alongside Petito's parents and stepparents, Stafford said the FBI had asked them not to discuss the relationship between the families. He said they were confident the FBI would thoroughly investigate the case and get justice for Petito.

Petito's parents and stepparents also announced the creation of the Gabby Petito Foundation, which they said would help keep alive her memory and help families in similar situations. And they revealed they got matching tattoos reading, "Let it be," in a script that their daughter designed.

"I wanted to have her with me all the time," her mother, Nicole Schmidt, said.

For their part, Laundrie's parents affirmed they do not know his whereabouts two weeks after he was last seen, according to Bertolino, their attorney.

"Chris and Roberta Laundrie do not know where Brian is. They are concerned about Brian and hope the FBI can locate him," Bertolino said Monday night. "The speculation by the public and some in the press that the parents assisted Brian in leaving the family home or in avoiding arrest on a warrant that was issued after Brian had already been missing for several days is just wrong."

Petito, 22, and Laundrie, 23, spent their summer traveling in a white van through the American West while she posted about their adventures across social media.

Those posts abruptly stopped in late August, and Laundrie returned to his parents' home in North Port with the van but without his fiancée September 1, according to police. Petito's family, unable to get in touch with her, reported her missing September 11.

Petito's remains were found in a camping area in Wyoming's Bridger-Teton National Forest on September 19, near where the couple had last been seen.

In Florida, authorities conducted a large-scale search for Laundrie for a week at the Carlton Reserve. Police say his parents told them September 17 that three days earlier he'd indicated he was going to that area.

The reserve is a sprawling swampland that stretches over 25,000 acres in southwest Florida, authorities said. A source close to the family told CNN that Laundrie left his parents' home without the cell phone and his wallet and his parents were concerned that he might hurt himself.

The FBI, which has taken over the case, is leading a more targeted search based on intelligence, North Port police said, and agents visited his parents' home to get personal items that would assist with DNA matching, multiple news outlets have reported.

A federal warrant for his arrest was issued on suspicion of his using "unauthorized devices" stemming from his alleged actions following Petito's death.

Laundrie allegedly used a debit card and PIN for accounts that did not belong to him for charges exceeding $1,000 between August 30 and September 1, according to a federal indictment.

An attorney for Laundrie's family emphasized in a statement that the warrant was not for Petito's death but related to activities that allegedly took place afterward.

Two separate rewards totaling $30,000 have been offered to anyone who provides law enforcement officials with Laundrie's whereabouts.

The unanswered questions about what happened to Petito have spurred digital detectives to comb through the couple's online trail to try to solve the case and surfaced reports that tension may have been building between the couple.

The focus on Petito's case has also highlighted the tens of thousands of missing persons' cases across the country and raised questions about why some of those cases garner such intense interest and others do not.

Correction: An earlier version of this story misstated when Laundrie purchased a new cell phone based upon a statement from the family's attorney. The attorney later clarified it was on September 4.