Time capsule believed to contain Gen. Robert E. Lee's button and a hair from his horse found under a Confederate monument 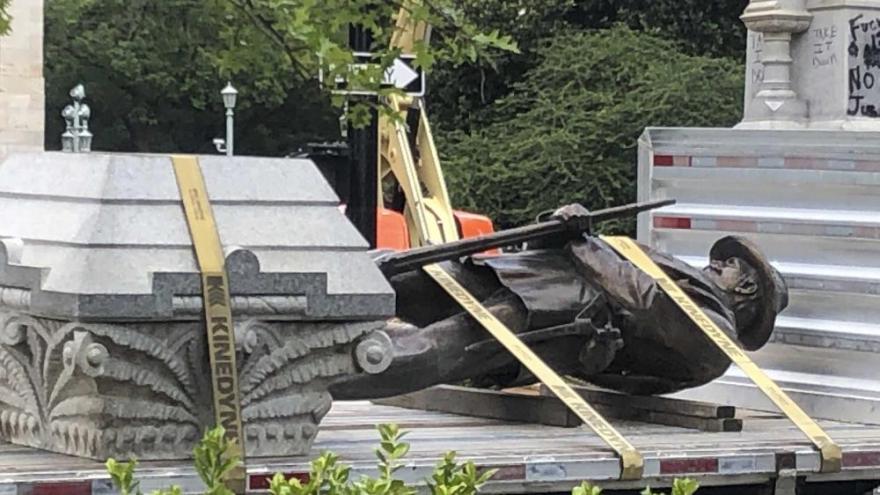 The statue of a Confederate soldier and plinth sit on a flatbed truck at the Old Capitol in Raleigh, N.C., on Sunday, June 21, 2020.

(CNN) -- Officials working to remove a Confederate monument from downtown Raleigh, North Carolina, discovered an unopened time capsule in its base.

Now, 126 years after it was buried underneath the Confederate Soldiers Monument on the grounds of the North Carolina State Capitol, archaeologists and conservators from the state Department of Natural and Cultural Resources (DNCR) have revealed what's inside: a stone believed to be taken from Gettysburg, a pair of buttons and a strand of what is likely horse hair.

But most notable: According to a list of items buried in the small wooden box published in the Charlotte Democrat on Friday, May 25, 1894, the buttons belonged to Gen. Robert E. Lee and the strand was plucked from his horse, Traveller.

Such time capsules aren't entirely uncommon. In 2017, a time capsule was discovered buried deep in a Confederate monument in St. Louis, and in 2018, flags, cash and medals were found underneath a Confederate statue that was removed in New Orleans.

Rarely, however, do these capsules contain relics from Lee himself.

The metal box found last week in Raleigh was "severely damaged by the elements" and had rusted through in several places, the DNCR said in a news release. Work to preserve the items and the box itself was underway.

Other items that were said to be buried in the box but likely lost to time include Confederate money, maps, and a Bible found at Appomattox Court House the day after Lee surrendered his approximately 28,000 troops to Union Gen. Ulysses S. Grant, ending the war.

The monument was one of many ordered removed by North Carolina Gov. Roy Cooper in June in the wake of protests over the death of George Floyd that saw similar ones toppled.

In a statement released by his office and published to Twitter, Cooper said, "Monuments to white supremacy don't belong in places of allegiance, and it's past time that these painful memorials be moved in a legal, safe way."

Correction: This story has been updated with the correct spelling of Lee's horse's name.