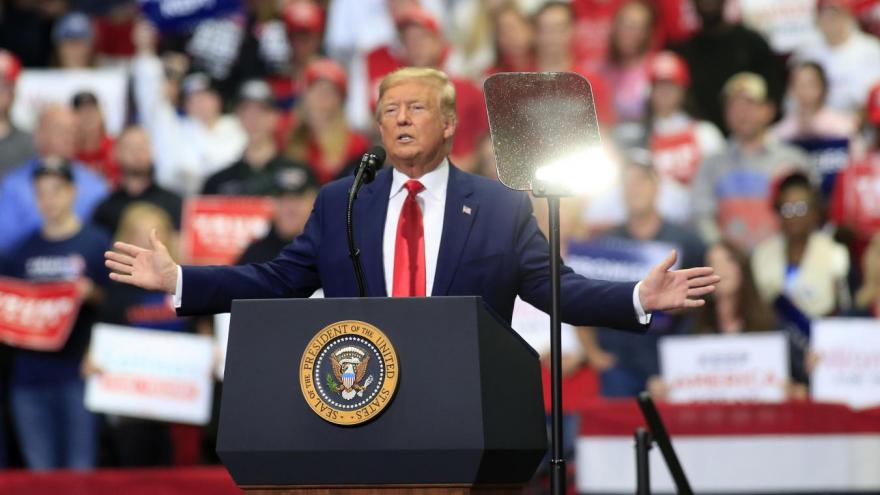 President Donald Trump speaks to supporters during a rally on March 2, 2020 in Charlotte, North Carolina.

(CNN) -- President Donald Trump says almost 1 million people had requested tickets to attend his upcoming rally in Tulsa, Oklahoma. But some who have registered for the free event, which is scheduled to take place at a nearly 20,000 seat auditorium next week, say they have no plans to attend.

They're trying to troll the President's campaign instead.

Mary Jo Laupp, a 51-year-old grandmother living in Fort Dodge, Iowa, appears to have helped led the charge on TikTok late last week when she posted a video encouraging people to go to Trump's website, register to attend the event -- and then not show up.

"All of those of us that want to see this 19,000 seat auditorium barely filled or completely empty go reserve tickets now and leave him standing alone there on the stage," Laupp told her then-1,000 or so followers on TikTok, normally thought of a platform for dancing teenagers and not, necessarily, political action.

Laupp, who said she worked on Pete Buttigieg's campaign in Iowa last fall, told CNN she made the initial appeal upset that the rally was originally set to take place on Juneteenth, the holiday commemorating the end of slavery in the United States.

The decision to hold the first Trump campaign rally in months on the holiday, and in Tulsa -- the site of one of the worst incidents of racial violence in US history --was met with widespread criticism amid nationwide protests about police brutality and racial inequality. The campaign eventually moved it one day later.

Still, the hometown newspaper has editorialized that "this is the wrong time" and "this is the wrong place," citing the challenges created by the coronavirus pandemic along with racial unrest following the killing of George Floyd.

Laupp, who works at a high school and signed up to TikTok earlier this year, told CNN the video blew up overnight.

And then, alongside the choreographed dances, comedic dares and schoolyard pranks, the grandmother's prompt became a challenge of its own. Inspired users began posting videos showing they too registered for the event -- similar posts on Instagram and Twitter clocked up thousands of likes.

Her idea prompted multiple other TikTok users to post similar videos calling on their followers to do the same -- visit the website, register for the event, fail to show up.

One video, with more than a quarter of a million views, called on fans of South Korean pop music in particular to join the trolling campaign. Fans of the music, which is known as K-pop, are a force on social media -- they posted over six billion tweets last year alone. And they have a history of taking action for social justice causes.

Earlier this month K-pop fans rallied around the Black Lives Matter movement, drowning out "White Lives Matter" and other anti-black hashtags. It is not clear if K-Pop fans have registered for the Trump Tulsa rally in big numbers.

Despite their intent, the objective of the effort, to leave Trump with an empty stadium on Saturday, is almost certainly going to be unsuccessful. Although the capacity of the Bank of Oklahoma Center in Tulsa is just under 20,000, the Trump campaign has, clearly, not put a limit on how many people can request tickets.

On top of that, to register for the event people have to hand over a phone number to the Trump campaign -- feeding the campaign's vast data operation.

When registrations passed 800,000, Trump campaign manager Brad Parscale described it as the "Biggest data haul and rally signup of all time by 10x."

Erin Perrine, principal deputy communications director for the Trump campaign, told CNN, "Leftists do this all the time. They think if they sign up for tickets that will leave empty seats. Not the case at all. Always way more ticket requests than seats available at a rally. All they are doing is giving us access to their contact information."

The RSVPs are designed to give the campaign a sense of what the turnout will be and to collect information about potential supporters for use in the campaign's voter database going forward. Those who make it into the event will be the ones that arrive first. It is a first come, first served event.

Campaign officials say that the RSVPs are concentrated in the area around Tusla, but are also coming from all over the country.

Campaign events, both Republican and Democrat, rarely if ever require physical tickets to gain entrance. Trump campaign events have never required a ticket to get in and this event in Tulsa will be no different.

Trump on Monday said the campaign would utilize the convention hall next to the "magnificent stadium" where the rally would be held -- adding 40,000 additional spaces to the roughly 20,000 who can fit in the BOK Center.

"I think we're going to have a great time," Trump said. He said he would discuss the state of the nation, "where we're going, where we've come from."

"We expect to have -- you know, it's like a record-setting crowd. We've never had an empty seat," he said.

Vice President Mike Pence was pressed by Fox News hosts on why the campaign couldn't host the rally at an outdoor venue, given the spread of coronavirus through aerosols in enclosed spaces. He suggested that was a possibility.

"You raise a good point and what I can tell you is it's all a work in progress and we've had such an overwhelming response that we're also looking at another venue. We're also looking at outside activities and I know the campaign team will keep people informed as that goes forward," Pence said, reiterating that there will be temperature screenings, hand sanitizer, and masks provided for people attending. But as CNN has reported attendees will not be required to wear a mask. Trump has notably declined to wear a mask in public.

The grandmother who helped spark the effort, Laupp, said the Trump campaign will "find bodies to put in seats." Still, she believes the TikTok stunt is an effective way to raise awareness about why the original plan to hold the rally in Tulsa on Juneteenth was so problematic in the first place.

Laupp told CNN she had heard from people this week who had not known about the Tulsa massacre, and that "we as American citizens owe it to marginalized communities to know those parts of history."

She said she plans on continuing to use her newfound TikTok platform in the months leading up to November's election.

Having voted for Gary Johnson in 2016, she describes herself as a libertarian and while she is not yet sure if she will vote for former Vice President Joe Biden in the fall, she says she knows she will not vote for President Trump.