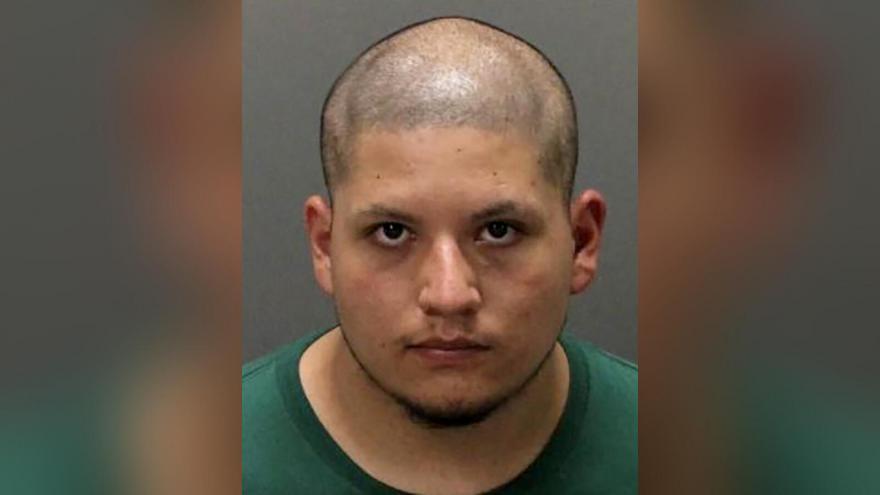 Joseph Jimenez, 20, was arrested in connection with a movie theater shooting in Corona, California Tuesday and is being held on $2 million bail and charged with murder, attempted murder and robbery

(CNN) -- A well-known TikTok user has died of his injuries after being wounded in a shooting at a California movie theater Monday night that left another woman dead, police said.

"We extend our thoughts and condolences to his family and friends," the release said.

Barajas and a friend, Rylee Goodrich, 18, were at a showing of "The Forever Purge" at the Regal Edwards Movie theater in Corona on Monday, police said. The teens were friends and went to watch the movie together, according to police. Theater staff found them with gunshot wounds after the movie, according to police.

Goodrich died at the scene and Barajas was taken to a hospital for treatment where he was on life support.

Joseph Jimenez, 20, was arrested in connection with the shooting Tuesday and is being held on $2 million bail and charged with murder, attempted murder and robbery, according to an earlier CNN report. The police department said Saturday it is working with the Riverside County District Attorney's office to add another count of first-degree murder against Jimenez for Barajas' death.

CNN has reached out to the Riverside County public defender's office to determine if Jimenez has retained legal representation and has not heard back.

Jimenez was located by police at his home in El Cerrito, an unincorporated area of Corona. Police searched Jimenez' home and found a firearm and additional evidence related to the movie theater crime scene, they said.

"The Forever Purge," which debuted in theaters earlier this month, is the fifth movie in the "Purge" franchise. Each sequel is based on the premise that a totalitarian government has created one night each year where everything, including murder, is legal.

There were fewer than 10 people in the theater where Goodrich and Barajas were shot, Corona Police Capt. Paul Mercado told CNN earlier this week, yet it has not been determined if the shooting happened during or after the movie.

"They were shot in the head," Corona Police Cpl. Tobias Kouroubacalis told CNN in an email. "We will not know how many times or the exact entry point of the bullet(s) until the coroner performs their autopsies and writes their reports."

CNN has contacted the theater for comment but has not heard back.

Police believe that Jimenez, who had a movie ticket, acted alone and didn't know the victims or have any prior contact with them.

"It's an unfortunate turn of events here," said Mercado. "The public here are really looking for a motive. Right now, there is no motive. It's an unprovoked attack."

Police said that items were taken and "robbery is part of what happened during that crime," but that they are not calling it a motive in the shooting, Kouroubacalis said during a press conference held on Wednesday.

A TikTok enthusiast, a runner with a 'great heart'

Barajas had nearly 930,000 followers on TikTok and recently posted video updates from a family vacation. During high school, he was a standout soccer player at Mater Dei High in Santa Ana, according to CNN affiliate KABC.

Goodrich attended Corona High School, according to KABC, and played volleyball, ran track and was a cheerleader. After high school, she received a college scholarship for Grand Canyon University's STEM program. She was in town visiting family for the summer.

Her cousin, Ashley Cole, told KABC she had a "great heart" and always willing to helping others.

Jimenez is expected to appear before a judge for arraignment in the next couple days, according to Kouroubacalis.