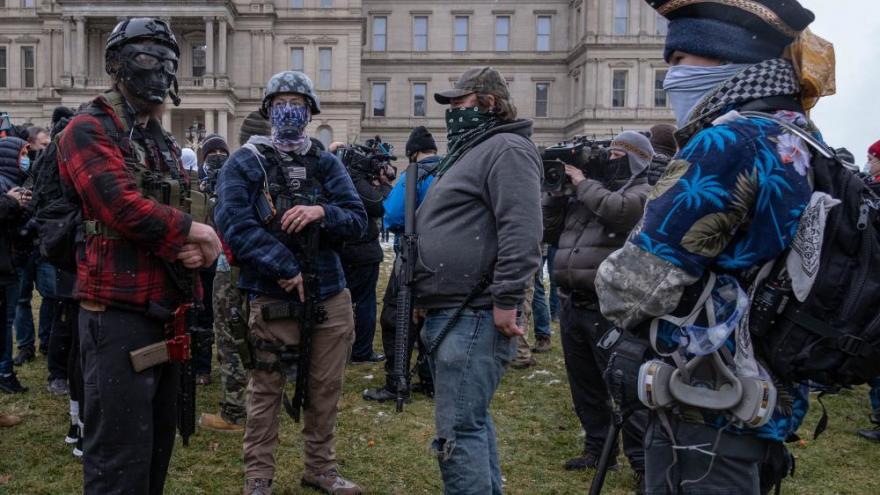 Members of the Michigan Boogaloo Bois, an anti-government group, stand with their long guns on January 17 near the Capitol Building in Lansing, Michigan.

(CNN) -- The US Capitol in Washington, DC, and state capitols across the country were under tight security as President-elect Joe Biden was inaugurated on Wednesday.

After a pro-Trump mob attacked the US Capitol two weeks ago, the FBI warned of possible armed protests at the Capitol and all 50 state capitols in the days leading up to and including inauguration.

FBI Director Christopher Wray had warned last week that the FBI has been seeing "extensive" chatter surrounding the inauguration.

But the large security efforts dwarfed the protests that materialized by Wednesday evening. State capitols and other cities remained largely calm.

One exception was Portland, where left-wing protesters damaged the Democratic Party of Oregon building during one of several planned demonstrations.

"The crowd walked to the 200 Block of Northeast 9th Avenue, where people broke out windows and applied graffiti on the offices of the Democratic Party of Oregon. People moved dumpsters in the street and lit the contents of one on fire," police said in a news release.

Video from CNN affiliate KATU showed broken windows and an anarchy symbol spray-painted to the side of the front door, with a profane reference to Biden scrawled on the other side.

Later, police also said there was a crowd located at the federal Immigration and Customs Enforcement building in the South Waterfront neighborhood.

"Individuals in the crowd have been seen carrying pepper ball guns, electronic control weapons similar to Tasers, shields and rocks," police said, adding the gathering was declared an unlawful assembly after "individuals began throwing rocks and eggs and vandalizing the building."

In Michigan, where about a dozen demonstrators -- some armed -- gathered at the state capitol in Lansing over the weekend, only a few protesters appeared on Wednesday. In St. Paul, Minnesota, a single officer stood guard on the steps of the capitol, where an expected crowd of demonstrators failed to materialize.

In Madison, Wisconsin, plywood covered the capitol's first-floor windows and members of multiple law enforcement agencies patrolled the desolate area. In Denver, about 60 demonstrators were seen outside the state capitol, some burning Trump and American flags as officers watched from a balcony. In other states that were critical to Biden's victory, handfuls of protesters participated in non-violent demonstrations.

In New York, Gov. Andrew Cuomo, appeared to regret his decision earlier this week to not attend the inauguration and remain in Albany in case of unrest.

"There was reportedly one protester," Cuomo told reporters, referring to a lone Trump supporter photographed outside the state capitol.

"I just took a look outside, I couldn't find the protester," he added. "I could have gone to the inaugural, in retrospect."

The FBI warning led to a massive security presence in DC.

About 25,000 National Guard members are present and much of the area around the National Mall and Capitol are inaccessible to the public. Commercial flights at Washington Reagan National Airport were halted for about two hours leading up to Biden taking the oath of office, according to the Federal Aviation Administration.

The security efforts even extended to vetting National Guard members arriving in Washington for the inauguration in case of an "insider threat."

"While we have no intelligence indicating an insider threat, we are leaving no stone unturned in securing the capital," Acting Secretary of Defense Christopher Miller said Monday.

Twelve Army National Guard members were removed from inauguration duty as part of the security vetting to ensure none of the troops have ties to extremist groups, the chief of the National Guard Bureau said Tuesday.

Between the security concerns and the ongoing Covid-19 pandemic, Biden's inauguration was unlike any other in American history.

Ahead of inauguration, states also bolstered their defenses by setting up fences and barriers, boarding up windows, and calling in the National Guard.

Many state capitols that had prepared for the worst encountered just a handful of people. All of the protests were peaceful. There have been a few armed protesters at state capitols, but those that occurred have been relatively small and with varying political views.

On Sunday, small gatherings of protesters, some of whom were armed, stood outside capitols in Michigan, Ohio, Texas and several others states.

In Richmond, Virginia, several armed demonstrators who gathered on Monday identified themselves as members of the Proud Boys and Boogaloo groups as well as the Black Panthers. Outside Oregon's capitol in Salem, five armed people dressed in camouflage said they were anti-government libertarians who supported neither Trump nor Biden.

The heavy security and ongoing arrests of people who participated in the storming of the US Capitol may have played a role in discouraging the protests.

Anti-government groups that vowed to show up in the days before the inauguration appear to have been spooked in part by their own conspiracies that the government was behind some of the nationwide protests that have so far fizzled.

Law enforcement officials say there is a broad surveillance net focused on people in the groups who participated in the Capitol attack. One of the prominent themes emerging is that the very anti-government conspiracies that drive groups like the Oath Keepers and other militants has become a driver to avoid the protests, fearing that they were being set up for arrest.

Some of the people most likely to attend these types of events are also trying to lower their profile after participating in the insurrection, law enforcement officials said.

Some have seen their faces in FBI posters circulated in the past week. In some cases, members of the groups have turned themselves in, hoping to gain some benefit from not waiting for the FBI come find them.