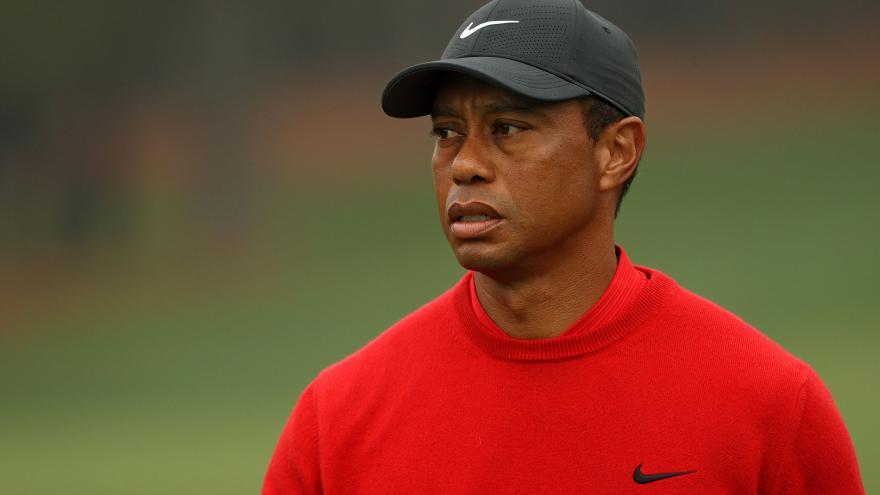 But according to a tweet from the Los Angeles County Fire Department, Woods was in serious condition when he was taken to a hospital.

"One, adult male was assisted out of the vehicle & transported to a local area hospital in serious condition," the tweet says.

Woods, 45, suffered moderate to critical injuries after emergency responders pulled him from his vehicle, according to Los Angeles County spokesperson Henry Narvez.

A tweet from the sheriff's department earlier said rescuers used the Jaws of Life to get him out of the vehicle. White, however, told KCAL/KCBS he didn't think the hydraulic rescue equipment was used.

Images from the scene showed the windshield of Woods' vehicle was broken out, but it wasn't clear whether that happened as a result of the crash.

Woods suffered "multiple leg injuries" and was in surgery following the accident, according to Golf Digest, which quoted a statement from Woods' agent Mark Steinberg. CNN has reached out to Woods' representatives for comment.

Woods was taken to Harbor-UCLA Medical Center. CNN has reached out to the hospital for his condition.

How the crash happened

Aerial video from KCAL/KCBS showed the vehicle on its side off the roadway, which has two lanes in each direction and is divided by a median.

Woods' vehicle crossed the center of the roadway before crashing, an official with the Los Angeles Sheriff's Department told Fox News.

"It's kind of a downhill grade, and there are some winding turns, as well," Capt. James Powers said. "(The vehicle) crossed the center median and went up the curb on the other side of the road, and it overturned into some shrubs."

Powers said he thinks someone who lives near the scene reported the accident to sheriff's deputies. "It took them about six minutes to arrive on scene, and they found a vehicle that had been overturned," Powers said, "and it was off into some brush."

Powers told Fox that a preliminary investigation indicates there are no signs of foul play. "That road is kind of a steep climb, and he was coming downhill. Speeds can increase just by the momentum of a vehicle," Powers said.

White described the area as "not necessarily dangerous, but it is a downhill grade with runaway truck lanes."

Traffic investigators could take days or weeks to determine cause of the crash, White told KCAL/KCBS, as they determine whether speed, fatigue or operator error were factors, or whether Woods struck something in the road, causing him to lose control.

The Los Angeles law enforcement source told CNN that no field sobriety test was administered because of the seriousness of Woods' injuries.

This morning @LMTLASD responded to a roll-over collision in which @TigerWoods was injured. Please see our statement... pic.twitter.com/cSWOxKZC1w

The road was closed as detectives sift through a large debris field, which White said is common for this type of crash.

The sheriff's department earlier said Woods was the only occupant of the car.

Another car, not involved in the initial rollover incident, stopped after the crash and was rear-ended.

Woods, a 15-time major champion, underwent a back operation for the fifth time in his career earlier this year.

Woods told sportscaster Jim Nantz in video posted Sunday on the PGA Tour's Twitter feed that he was "feeling fine" but a "little bit stiff" after his most recent procedure. He said he was scheduled to get one more MRI.

Woods previously had back surgery -- a spinal fusion -- in 2017 and made his return almost a year later. He went on to launch a remarkable comeback, winning the Masters in 2019.

Any progress last year was hampered by yet another back injury and the pandemic, which heavily disrupted the golf calendar.

"We have been made aware of Tiger Woods' car accident today. We are awaiting further information when he comes out of surgery. On behalf of the PGA TOUR and our players, Tiger is in our prayers and will have our full support as he recovers," PGA Tour Commissioner Jay Monahan said

Woods last played competitive golf at the rescheduled Masters in November. He also played golf in a father-son event called the PNC Challenge in December in Florida.

Woods was the host of this weekend's PGA Tour event, the Genesis Invitational at Riviera Country Club in Pacific Palisades, and some proceeds went to his foundation.

World No. 3 golfer and friend Justin Thomas got emotional while talking about Woods ahead of the Workday Championship at The Concession event in Bradenton, Florida.

"I'm sick to my stomach," he told PGA Tour Entertainment. "You know, it hurts to see one of your -- now one of my closest friends get in an accident. Man, I just hope he's all right. Just worry for his kids, you know. I'm sure they're struggling."

Woods was at a course Monday, according to NBA legend Dwyane Wade.

"The reason I picked up a golf club. Yesterday was a pretty cool day! Thank you @tigerwoods @golfdigest for this dope opportunity!" he wrote on Instagram Tuesday.

Actress Jada Pinkett Smith posted photos on Twitter of her and Woods at the links.

"Guess who I had the most awesome golf day with yesterdayyyyyy??? Yes! The magnificent @TigerWoods !!!! Yes ... dreams come true. I can't wait for you to see my golf journey with Tiger. Stay tuned!" she wrote.

Jack Nicklaus, whose record of 18 major titles Woods has been chasing, tweeted his well wishes.

"Barbara and I just heard about Tiger's accident, and like everyone else, we are deeply concerned," he wrote. "We want to offer him our heartfelt support and prayers at this difficult time. Please join us in wishing Tiger a successful surgery and all the best for a full recovery."