Tiger Woods is 'recovering and in good spirits,' tweet says 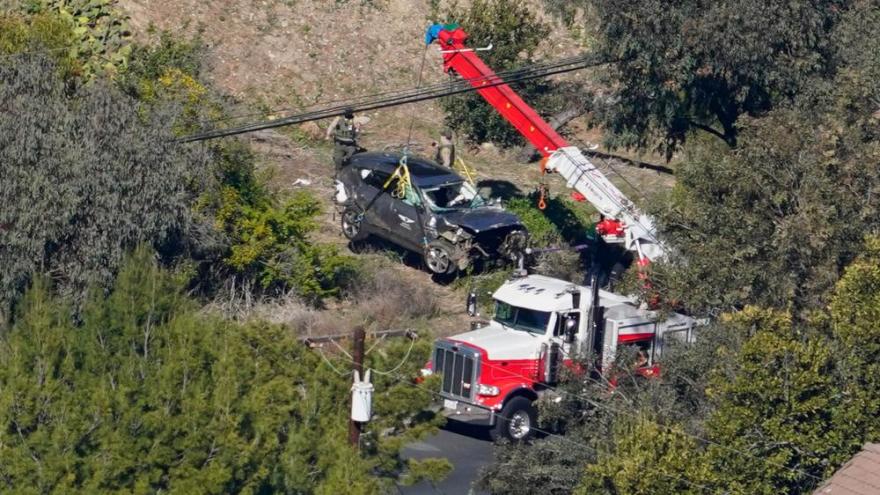 Workers move a vehicle after a rollover accident involving Tiger Woods on February 23.

(CNN) -- Following a car accident Tuesday morning in California that resulted in significant leg injuries and required an extraction from his vehicle by first responders, Tiger Woods now begins the arduous recovery process.

He was moved to Cedars-Sinai Medical Center in Los Angeles, where he "received follow-up procedures on his injuries this morning," a tweet posted Friday to Woods' Twitter account said. "The procedures were successful, and he is now recovering and in good spirits."

"Tiger and his family want to thank you for all the wonderful support and messages they have received over the past few days. We will not have any further updates at this time," the tweet said.

Woods' injuries include "comminuted open fractures affecting both the upper and lower portions of the tibia and fibula bones," Dr. Anish Mahajan, the chief medical officer and interim CEO at Harbor-UCLA Medical Center -- where Woods was initially treated -- said Tuesday, meaning the bones broke into more than two pieces and pierced the skin. A rod was inserted into the tibia to stabilize the leg.

Additional injuries to the bones of the foot and ankle were stabilized with a combination of screws and pins.

Woods told investigators at the hospital after the accident that "he had no recollection of the crash" that left him seriously injured, Los Angeles County Sheriff Alex Villanueva told CNN's Erin Burnett on Wednesday.

The Los Angeles County Sheriff's Department has denied CNN's requests for documents and footage related to the incident, including bodycam footage, dash cam footage, surveillance and other reports.

The reasons for Woods' transfer have not been released, yet facilities affiliated with Cedars-Sinai are known for their sports medicine and related surgeries. Should Woods and his family choose to continue care within its network, options are available in terms of recovery.

The Cedars-Sinai Kerlan-Jobe Institute provides orthopedic surgeries, and practitioners at their clinics work with Los Angeles-area sports teams. Other professional athletes from around the country have had procedures performed at their centers.

The California Rehabilitation Institute, a partnership between Cedars-Sinai, UCLA Health and Select Medical, provides programs as well for those on the mend.

The institute is "the largest inpatient facility of its kind on the West Coast," according to its website, and "is designed to help each patient recover the strength, skills and independence they need to return home and resume their lives."

Webb Simpson, who is tied atop the Thursday leaderboard at the PGA WGC-Workday Championship in Florida, shared his thoughts on Woods, saying his focus was on the golfer's well-being.

"Of course you think about the golf career, you think about what he's done for the game, but the thing I kept thinking about was his kids and how thankful I am that he made it out of that," Simpson said.

He added, "The biggest thing I was concerned with, following the news and texting buddies, trying to figure out what was going on was, 'Is he OK? Is he going to make it?'"

Phil Mickelson expressed similar sentiments Thursday after his round at a PGA Tour Champions event in Arizona.

"All the guys here understand and appreciate what he has meant to the game of golf, and for us and the PGA Tour. We are all very appreciative and supportive of what he has done for us. But right now, that is so far from our minds," Mickelson said.

"I thought Rory McIlroy really said it well when he said that we're just lucky and appreciative that his kids didn't lose their father. We all are hoping and praying for a full and speedy recovery. We are all so thankful because that looked awful. We are thankful that he is still with us," Mickelson said.

McIlroy said on Wednesday when asked about a potential career comeback for Woods, "He's not Superman... He's a human being at the end of the day. And he's already been through so much. At this stage I think everyone should just be grateful that he's here, that he's alive, that his kids haven't lost their dad.

"That's the most important thing. Golf is so far from the equation right now, it's not even on the map at this point," McIlroy said.