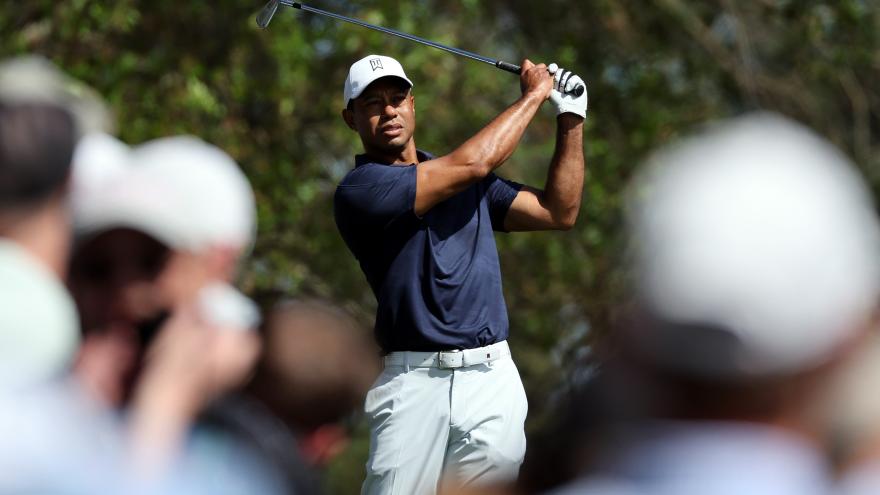 (CNN) -- Tiger Woods says "as of right now I feel like I am going to play" in the Masters -- and he thinks he can win it.

"I don't have any qualms about what I can do," he said at a news conference, responding to a question about whether he can win the tournament.

The 15-time major champion has been away from competitive golf for over a year, having suffered serious leg injuries in a car crash in February 2021.

Tiger Woods' potential teeing off on Thursday's opening round of the 2022 Masters had golf ablaze with excitements.

Woods, 46, has been spotted playing a few practice rounds at Augusta National, including one on Monday, which has only fueled rumors of a comeback.

One of his playing partners seemed certain of what will happen on Thursday.

"I hope everything keeps going Tuesday and Wednesday and I'm sure he's going to tee it up Thursday," Fred Couples told reporters. "It's not shocking because he's the greatest player to ever play."

"He's a good example of life's not always perfect, and so it's really exciting to see him on his highs," he told the media.

"And so I hope that he is able to tee it up this week and play well, and obviously that's the greatest thing for our sport. There's definitely a different feel in tournaments that he tees it up in."

In the car crash last year in Los Angeles, Woods suffered comminuted open fractures that affected his right tibia and fibula, which are the two long bones directly under the knee.

He admitted in February this year that he was "frustrated" with his recovery and conceded he won't be able to play a full PGA Tour schedule again.

Someone who knows a thing or two about coming back from serious injuries is four-time major winner Brooks Koepka.

The 31-year-old has had to endure his own share of injury concerns, missing sizeable time over recent years due to surgery recovery and rehab.

And Koepka, who comes into the 2022 Masters as one of the favorites for the Green jacket, said he understands what Woods might be going through.

"I was in somewhat of his shoes trying last year two weeks after surgery. This place isn't exactly an easy walk," he told the media. "I understand what he's up against. It'll be difficult. But if anybody can do it, it's him."

Koepka added: "I'm happy he's becoming healthier and able to play golf ... we need him, the game needs him, everybody needs him, the fans need him, all that stuff. But at the end of the day everybody is just out here competing. I'm worried about myself and I'm sure everybody else is worried about themselves."