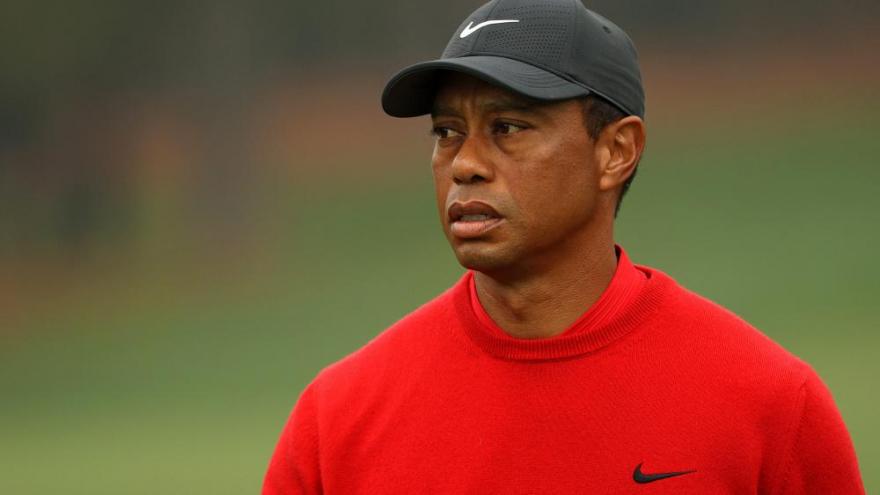 Tiger Woods of the United States looks on after a shot on the second hole during the final round of the Masters at Augusta National Golf Club in 2020.

(CNN) -- Even after his emergency surgery, the path to recovery is long and uncertain for golf legend Tiger Woods, following his car accident in California.

"He is still in that acute phase where they may still have a lot of work to do in the present, in moments, in days to come," Dr. Jeremy Faust, emergency physician Brigham and Women's Hospital in Boston, told CNN on Wednesday. "It's unclear to me whether he will be going back to the operating room or not."

"On behalf of our staff, it was an honor to provide orthopedic trauma care to one of our generation's greatest athletes," Mahajan said in a statement.

The 45-year-old was driving Tuesday in Rancho Palos Verdes, near Los Angeles, shortly after 7 a.m. PT when his SUV crossed a median and veered across two lanes of road before hitting a curb, hitting a tree and landing on its side in the brush, Los Angeles County Sheriff Alex Villanueva said Tuesday.

Woods sustained injuries to his leg that required a rod, screws, pins and a surgical release of the muscle covering -- one that surgeons likely believed would save his leg from amputation, Faust said.

Authorities believe that the incident was "purely an accident," but will have to pull the black box event recorder from the vehicle to make that determination, Villanueva said. When he saw Woods in the hospital Tuesday, the 15-time major champion told investigators he had no memory of the crash.

Just a month after his fifth career back surgery, the most recent crash threatens to set back his hopes of returning to golf glory.

He has made comebacks before

Though fellow golf professionals have acknowledged that Woods' health and his family are the most important things to consider at this time, they are also not counting him out.

He has done it before, Rory McIlroy said.

Famous from an early age, Woods turned professional in 1996 at just 21 years old, and his talent and charisma transformed him into a global icon. He won a remarkable 14 golf majors from 1997 through 2008 and looked set to stroll past the all-time record of 18 set by Jack Nicklaus.

But a series of injuries and personal issues derailed that career trajectory. In 2009, a car crash outside his Florida home led to tawdry revelations about his rampant infidelity and the collapse of his marriage.

After a break from the sport, he returned to golf but without the smothering dominance of his earlier years. There was also a growing list of injuries, leading to four back operations, including spinal fusion surgery, as well as the "dark times" where the pain was so bad he couldn't even get out of bed or play with his kids.

The operations and pain led to an addiction to opioid painkillers, and he was arrested on a DUI charge in 2017 in Florida. He pleaded guilty to reckless driving as part of a program to keep him from serving prison time.

That low point made his return to the top of the sport in 2019 all the more stunning. At the Masters, he surged to the lead and, followed by roaring crowds, clinched his first major win since the US Open in 2008 in one of the great comebacks in sports history.

World No. 2 John Rahm said he hoped Woods would be able to play golf and win more tournaments.

And that he would be able to then have a proper retirement, by standing on the iconic Swilcan Bridge in St. Andrew's Golf Course in Scotland "and just being able to properly say goodbye to the game."

Earlier this week, Woods said he hoped to compete at this year's Masters.

Woods was driving a Genesis SUV courtesy vehicle by himself and is believed to have been traveling at a high rate of speed before the crash, authorities said. There were no skid marks or other indications of braking, Villanueva added.

Villanueva said that section of road is "downhill on a curve," and he and Gonzalez said the area is known as a trouble spot for speeding and accidents. The road has seen 13 accidents since last January.

Los Angeles County Sheriff's Deputy Carlos Gonzalez, who responded to the crash, found a lucid Woods still strapped into his seat belt but trapped as the SUV had rolled over onto the driver's side door.

"I do think the fact that he was wearing a seat belt and that the vehicle safety features worked as designed by the manufacturer likely resulted in either reducing his injury or saving his life," Gonzalez told CNN's Chris Cuomo.

The car he was driving also featured an all-new safety platform, an executive for the automaker said in a statement to CNN.

The safety features of the Genesis GV80 include a strong focus on "passenger compartment protection/reinforcement areas," said Dana White, Chief Communications Officer for Genesis Motor North America. "This includes the use of advanced high strength steel for rigidity and safety."

The vehicle was equipped with 10 standard airbags, including a "center-side airbag unique to Genesis that deploys between the front seats," according to White.

While the exterior of the vehicle was mangled in the crash, the interior damage was such that Woods could survive.

"We have seen accidents with far less obvious (damage) that are fatalities," Villanueva told CNN.