Tiger Woods: Eyes of the world on five-time Masters winner at Augusta 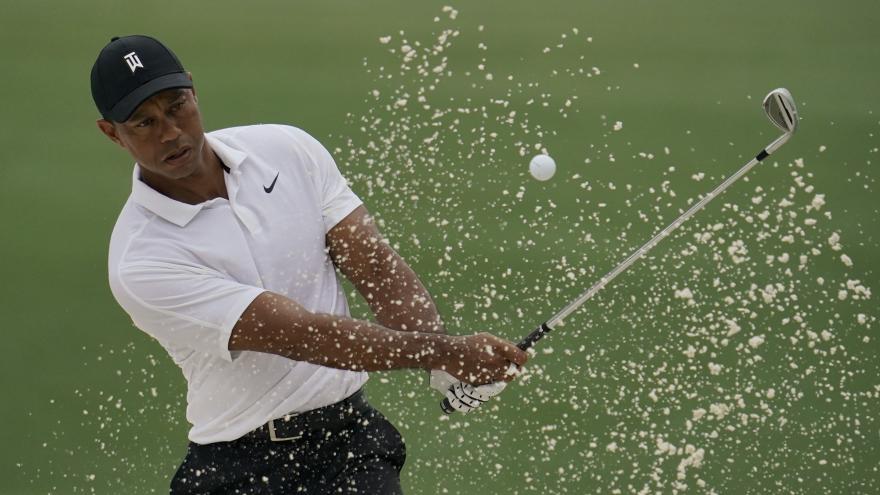 (CNN) -- Tiger Woods has teed off in the first round of the Masters on Thursday as he embarked on a remarkable comeback following a serious car crash in February 2021 in which he sustained serious leg injuries.

Five-time Masters champion Woods is playing in Group 14, alongside South African Louis Oosthuizen and Chilean Joaquin Niemann, though the first round of the 2022 Masters at Augusta National Golf Club tournament was delayed due to inclement weather in Augusta, Georgia.

"Due to thunderstorms in the early morning hours Thursday, gate opening times will be delayed by 30 minutes," the Masters said in a statement on Thursday.

Wearing a pink shirt, Woods was given a resounding round of applause from the crowd as his name was announced. After hitting his opening drive, Woods received more cheers from the crowd.

It wasn't the perfect drive though on the opening hole, as he ball found the bunker on the right of the fairway. He ended up making a birdie on the first hole to the delight of the watching patrons.

"It's a miraculous thing," said 1992 Masters winner Fred Couples. "Fourteen months ago, I'm bawling like a baby every day, and now ... he looks strong.

"I know the leg is hurt but he's hitting it plenty far enough to play this course, and he plays this course as well as he does, he's won here a bunch, he knows what to do."

Speculation first began to mount regarding Woods' participation in the tournament when his private jet was sighted landing at an airport near Augusta last week.

Since his car accident, Woods has appeared in public on a golf course just once -- at the PNC Championship in December with his son Charlie. Then Woods used a golf cart to help him get around the course.

"Walking is the hard part. This is not an easy walk to begin with," Woods said to the PGA Tour, referring to Augusta's hilly course.

"With the conditions my leg is in, it gets a little bit more difficult. Seventy-two holes is a long road. It's going to be a tough challenge and a challenge I'm up for."

Following near-complete domination of men's golf at the start of his career, Woods' career took a downward spiral.

However, the Masters was the site of a seemingly another impossible comeback when Woods secured victory in 2019, ending an 11-year wait between his 14th and 15th major wins.

"He's Tiger Woods, so I'm not worried about watching him hit a ball ever because he's the best player I've ever seen play," Couples added.

"He's won so many times, and he's just not a guy to go do something mediocre. He'll compete, and he'll be ready to roll. I think it's amazing for him to be out here."