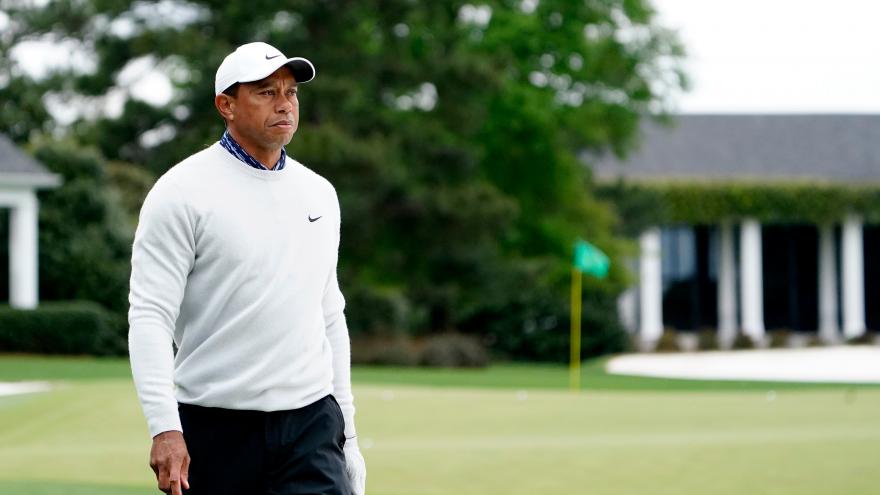 (CNN) -- Tiger Woods' incredible Masters journey continued on Saturday as he teed off for his third round at Augusta National.

The 15-time major winner defied the odds and made the cut on Friday, carding a two-over-par 74 after a roller-coaster round.

Woods has already achieved much more than what many thought he could as he makes his first appearance in competitive golf since his February 2021 car crash.

Woods begins his round nine shots, playing alongside fellow American Kevin Kisner, behind runaway leader Scottie Scheffler, who finished the second round with a five-shot lead.

Although the five-time Masters champion would have been hoping for a strong start to really make a charge, his Saturday got off to a bad start as he bogeyed the opening hole to fall to two-over for the tournament.

But, showing signs of his fighting spirit, Woods bounced back immediately.

An excellent bunker shot that clipped the lip of the hole gave him a short put to card a birdie to once again drop him to one-over. A steady par on the next hole kept him ticking along while the wind picked up and the patrons bundled up against the cold temperatures.

However, similar to his round yesterday, Woods' third round started with an up-and-down nature. After parring the fourth, he missed three close-range putts -- including two from very close in -- as he double-bogeyed to dent his title hopes.

According to the PGA Tour, his four-putt was just his second at the Masters, with his first coming in the first round in 2005 on the 13th hole.

This is a developing story and will be updated