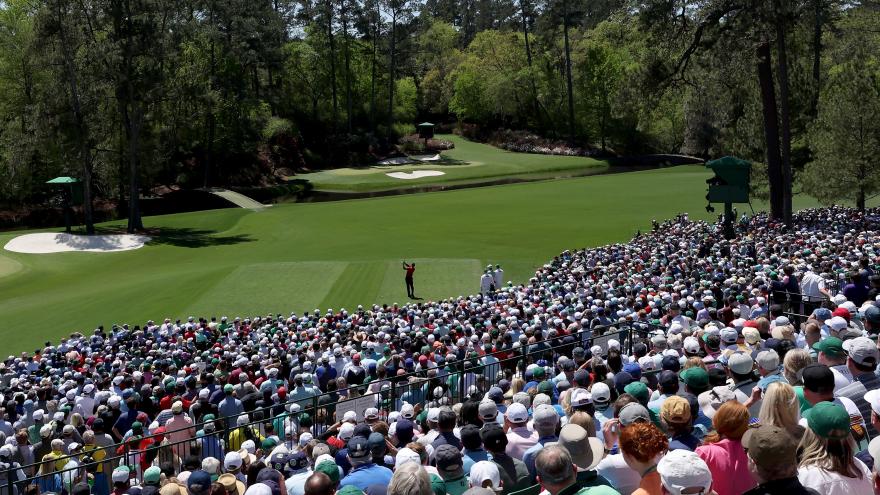 (CNN) -- Tiger Woods finished his latest appearance at the Masters with a six-over 78 as he capped off his remarkable comeback at Augusta National after nearly 16 months away from golf.

The 15-time major winner stunned the golfing world earlier this week when he announced that he would be making a dramatic return to the sport after suffering serious leg injuries in a car crash in February 2021.

After shocking many by making the cut on Friday with some determined play, his injuries and lack of match fitness seemed to catch up with him over the weekend.

He carded a six-over par 78 on Saturday, his worst score in a Masters round, and finished with the same score on Sunday to finish on 13-over.

While he might be well down on the leaderboard, overall it was a successful four days for the five-time Masters winner who showcased the spirit that's made him so successful in his first competitive golf action in almost a year and a half.

Afterwards, Woods confirmed he will play at the 150th Open Championship at St. Andrews, Scotland in July. Woods said he was still undecided about playing in golf's next major, the PGA Championship at Southern Hills Country Club in Tulsa, Oklahoma, in May.

When he was asked if he thinks this week was one of the greatest achievements of his career, Woods said: "For not winning an event, yes."

"To go from where I was to get to this point, I've had an incredible team that has helped me get to this point and incredible support from -- as I alluded to in the press conference on Tuesday, the amount of texts and FaceTimes and calls I got from players that are close to me throughout this entire time has meant a lot," Woods explained.

"Then to come here on these grounds and have the patrons -- I played in a Covid year, and then I didn't play last year. 2019 was the last time for me that I experienced having the patrons like this, and it's exciting. It's inspiring. It's fun to hear the roars, to hear the hole-in-ones. I think Kitchen made one the other day. To hear that roar down there at the bottom on 16, just to hear that excitement of what this tournament brings out.

Wherever Woods went over the Augusta course, the crowds that followed him were rows and rows deep.

His featuring at the major that he's won five times was a huge draw for many, with fans everywhere wishing the best for him as he made his highly-anticipated return.

And those fans got what they wanted over the first two round, with some glimpses of his class shinning through as he made an unexpected cut.

But in tricky weather conditions on Saturday, Woods struggled as it appeared the hilly Augusta National began to take a toll on his body. His recovery after the car crash included surgery to place a rod and pins in his right leg, and excruciating physical rehabilitation.

His round was littered with bogeys and birdies, as well as two double-bogeys -- a rare occurrence for Woods at the Masters -- as he slipped down the leaderboard.

On Sunday, playing alongside Jon Rahm under the bright Georgia sun, Woods was the center of attention during the early pairings to go out, receiving huge cheers from the patrons as he made his way around the course.

Wearing his famous red and black clothing -- the colors he traditionally wears on the final day of majors -- Woods delighted fans with some delicate touches and trademark excellence, including a monster putt on the 14th hole to salvage a bogey.

Overall, he carded one birdie, five bogeys and a double bogey during his final round to finish 13-over par -- but walked off the 18th hole to a standing ovation and cheers from spectators.

While he didn't trouble the top of the leaderboard, Woods' appearance at the Masters was about more than what happened on the course.