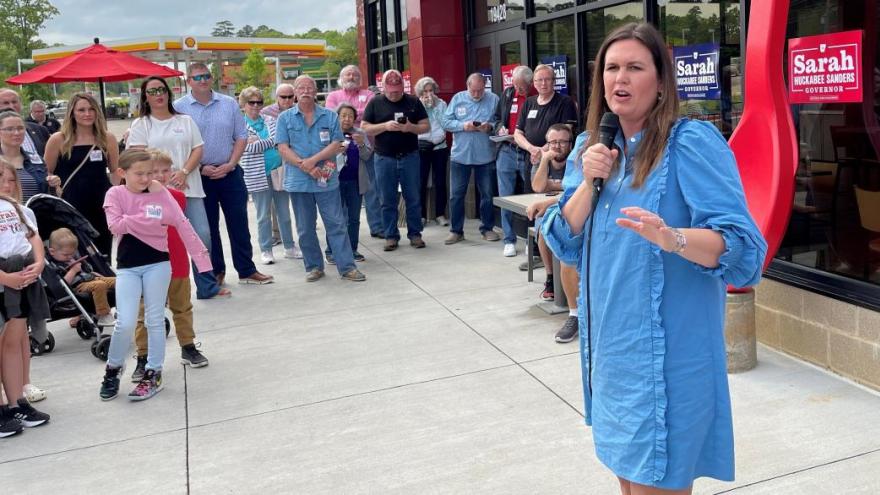 Sarah Huckabee Sanders, who has leaned into the more controversial chapters of her time in the Trump White House during her Arkansas gubernatorial campaign, is on a glide path toward securing the Republican nomination.

(CNN) -- Sarah Huckabee Sanders will win the GOP nomination for governor of Arkansas, CNN projects, putting her in strong position to win the governorship in this red state in November.

A return to the governor's mansion would be a homecoming for Sanders after she spent her teenage years in that residence as the daughter of former Gov. Mike Huckabee -- a pastor who led the state for more than 10 years. Sanders would be the first daughter in US history to serve as governor of the same state her father once led.

"The only thing that could stop Sarah Sanders from being governor of Arkansas is a Martian invasion," Arkansas Republican strategist Bill Vickery said ahead of Tuesday's primary.

Sanders left the White House in 2019 as a controversial figure on the national stage after two-and-a-half years serving as one of Trump's most trusted and unwavering defenders. During the campaign, she pointed to that tenure as testament to her unwillingness to back down, presenting herself as a firewall against the "radical left" while heaping scorn on the national media.

With her deep political connections in Arkansas, her experience as a seasoned political operative and the national following that she built as press secretary and later as a Fox contributor, she quickly established herself as the candidate to beat after entering the race in January of 2021.

But at the core of her connection to voters, Vickery said, was the fact that she has been in the public eye since her pre-teen years, starting with her father's 1992 US Senate run, followed by his stint as lieutenant governor, then his tenure as governor.

"She sort of grew up in front of everyone in Arkansas. Then as the spokesman for President Trump," Vickery said, "the vast majority of Arkansas voters, who are Republican, saw what they felt like was a significant mistreatment of her from the national press corps, and pop culture figures -- they saw her withstand that."

At the time of her exit from the White House, when Trump was lionizing her as a "warrior" and nudging her toward a run for governor, her critics were calling her a liar, arguing that her credibility and her legacy had been irrevocably tarnished.

Sanders came under fire personally when then-Special Counsel Robert Mueller's report was released. It revealed that as deputy press secretary, she had provided baseless information to reporters when she claimed in May of 2017, after the President had terminated FBI Director James Comey, that "countless" FBI agents had lost confidence in Comey. Sanders acknowledged to investigators that her comments were "not founded on anything," the Mueller report said.

But back home, many Arkansans viewed her treatment in Washington as rough.

"The stories of the personal attacks, the being thrown out of restaurants," Vickery said, alluding to a 2018 incident when Sanders said the owner of the Red Hen in Lexington, Virginia, asked her to leave because she worked for Trump. "There's a bit of an element of the people of Arkansas taking that personally -- because of the favorite daughter status. A big part of her public persona here is the fortitude, the grit and the determination that she showed in pushing back," he added.

Sanders' critics in Washington would offer a different account of her years navigating the nadir of White House-press relations. To mockery, Sanders at one point used her time at the podium to read a laudatory letter from 9-year-old child nicknamed "Pickle" to the President. She was often criticized for being evasive, for valuing loyalty to Trump above all else and for eventually phasing out the daily White House briefing.

Though she entered the White House with warm relationships with many reporters, the tensions quickly escalated. In a notable example of how strained the relationship had become, Sanders defended Trump's declaration that the press was an "enemy of the people" during a 2018 exchange with CNN's Jim Acosta. By January of 2019, Trump tweeted that the reason Sanders did not go to the podium "much anymore is that the press covers her so rudely & inaccurately," adding, "I told her not to bother."

But her popularity in the red state of Arkansas has demonstrated how receptive voters have been both to her combativeness and her unapologetic defense of Trump in that role.

GOP Lt. Gov Tim Griffin abandoned the governor's race to run for attorney general weeks after Sanders announced her bid. State Attorney General Leslie Rutledge, who had served as a legal adviser to Mike Huckabee both when he was governor and when he ran for president in 2008, exited the race in November to run in the already crowded race for lieutenant governor.

Trump's endorsement gave Sanders greater entrée to thousands of his small-dollar donors and she was also backed by GOP Gov. Asa Hutchinson.

"She's been an unstoppable force the whole time," said Janine Parry, a political science professor at the University of Arkansas, noting that Sanders has ascended at a very different political moment than her father, benefiting from Arkansas' transition from an overwhelmingly Democratic state to a solidly Republican one since 2010.

"She's a masterful campaigner. We really don't know much about her public policy positions, at least at the state level, but of course in this climate that really doesn't matter."

The Sanders campaign did not respond to CNN's requests for an interview.

Democrats are likely to end up with a charismatic and formidable nominee of their own in Chris Jones, an ordained minister and nuclear engineer who earned a Ph.D in urban planning at MIT. But Parry, who also is the director of the Arkansas poll at the university, said it will be difficult for any Democrat to break "38% at best" in November given GOP dominance within the state.

Sanders centered her campaign on some of the most polarizing national issues in politics -- decrying public school closures during the pandemic and taking aim at critical race theory, an academic framework that is rarely used below the university level. She has claimed that as governor she would "educate kids, not indoctrinate them."

She styled herself as the "last line of defense against the dangerous, radical left policies coming out of Washington." And she frequently reminded her audience of her relatability as a mom by prominently featuring her three children in her ads.

In one, where she makes the case that her role as a mother was the best preparation to run for higher office, her children attempt to give one another haircuts and build a tower of wine glasses in the kitchen -- portrayed as examples of Sanders' training in saying "no" (including to reporters in the White House press corps). "As governor, I will say no to Biden and the radical left's agenda, but yes to good schools, lower taxes and higher paying jobs," she says in the ad.

As voters struggle with rising gas and grocery prices, Sanders also campaigned on beginning to phase out the state income tax, though she has not specified a timeline or outlined the specific cuts she would make to existing programs. In the crisp, made-for-television soundbites that became her hallmark, she suggested it would create a "pay raise" for Arkansans that would offset the "pay cut" that they are experiencing through inflation, adopting the GOP argument that the Biden administration's policies have made inflation worse.

Jones, the Democratic candidate, told CNN he is not opposed to income tax cuts, but that as a mathematician he has yet "to see the work" from Sanders' campaign about what cuts would be required to make a full phaseout possible.

Vying against four other Democrats in the primary, Jones argues that Arkansans will ultimately reject what he has described as a Sanders' campaign message based on fear, lies and the politics of division and embrace what he calls his "PB&J" agenda -- preschool, broadband and jobs.

Sanders' opponents, on the left and right, accused her of avoiding tough questions and failing to offer clarity about her positions on controversial issues from the January 6, 2021, insurrection to the series of bills passed by the Arkansas legislature targeting trans rights and the LGBTQ community.

In a recent interview with the Arkansas Democrat-Gazette, Sanders -- an evangelical Christian -- said she would "not push for any exceptions" to abortion, including when asked about instances to save the life of the mother, or cases of rape and incest.

When asked whether the 2020 election was stolen for Trump, as he has falsely contended, Sanders was opaque during that recent interview. "I don't think we'll ever know the depths of how much fraud existed," she said, even though there is no widespread evidence of election fraud.

"We know there is fraud in every election," she told the newspaper. "How far and wide it went, I don't think that will be something that will be ever determined."

A political tactician makes the leap to candidate

Sanders' ease in deflecting questions in a way that leaves them open to broad interpretation is a political skill that has been helpful in her ascent. Several Arkansas political strategists said one of the most overlooked aspects of her campaign was the depth of her knowledge of the state as political tactician.

In her memoir "Speaking for Myself: Faith, Freedom, and the Fight of Our Lives Inside the Trump White House," Sanders notes that she spent most of her childhood on the Arkansas festival circuit campaigning with her dad. It was a rotation that included chuck wagon, toad and turtle races, and the Gillett Coon Supper where she said that one must eat racoon to avoid offending the hosts -- "and I loved it," she wrote. By the time she was a college sophomore at Ouachita Baptist University in Arkadelphia, she was spending the summer crisscrossing the state as a field staffer for her father's 2002 reelection campaign and organizing his statewide RV tour.

After two years in the George W. Bush administration, Sanders helped run her father's 2008 campaign for the Republican presidential nomination, later serving as campaign manager for his 2016 bid. In the early days of that first presidential campaign at the age of 24, she writes that she was her father's "scheduler, driver, advance team, digital director, press secretary (and) political director" -- ultimately running his operation for the Iowa Caucus, which he won. She later ran the 2010 US Senate campaign of then-Rep. John Boozman of Arkansas, helping him win the nomination outright in an eight-person field.

Jon Gilmore, an Arkansas-based political strategist who advises the governor, recalled how Sanders filled in for Boozman in one of his debates when he had a conflict: "How many other campaign managers have actually stood in for the candidate in a debate with other candidates running for the US Senate?" he asked ahead of Tuesday's primary.

"You had her, already then, with the ability to speak in a unique way to the voters of Arkansas, and now it's just on a whole different scale," Gilmore said. "She is a daughter of Arkansas. She knows the state better than anybody -- and I think that's why you have seen the support coalesce around her."

This story has been updated Tuesday with CNN's projection in the race.