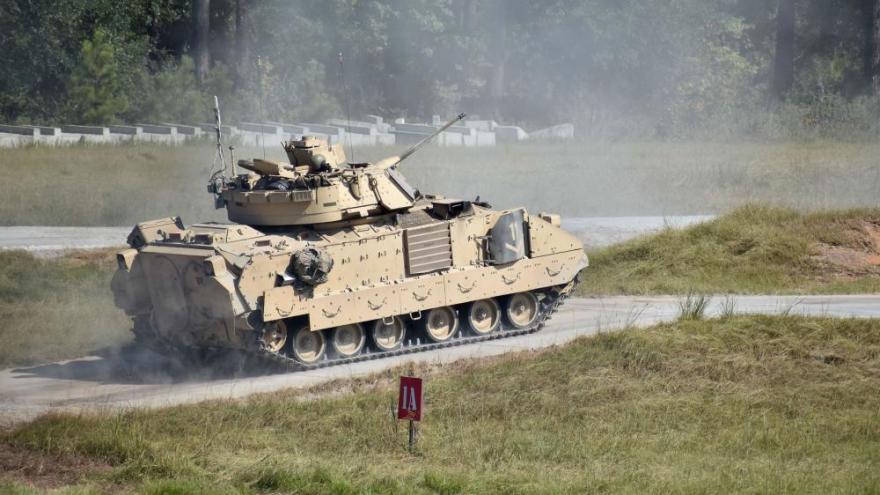 A Bradley Fighting Vehicle is seen in this file photo at Fort Stewart, Georgia. Three US soldiers with the 3rd Infantry Division were killed and three others injured during a training accident at an Army base in Georgia.

(CNN) -- The US Army on Monday identified the three soldiers killed during a training accident in Georgia early Sunday morning that injured three others.

The soldiers were riding in a Bradley Fighting Vehicle at Fort Stewart-Hunter Army Airfield when the vehicle "rolled off a bridge and was submerged upside down in a stream" at about 3:20 a.m., said Maj. Gen. Antonio Aguto, commanding general of the division.

The three soldiers were pronounced dead on site and the three injured were taken to Winn Army Community Hospital on Fort Stewart for their injuries. Two of the injured soldiers were later released, and the third was moved to Memorial Hospital in Savannah, Georgia, where he is in stable condition, Aguto said at a press conference Monday.

Taking a moment to steady his voice, Maj. Gen. Aguto was emotional in offering his condolences to the families of the three soldiers.

"It is hard enough when you lose one soldier, but when you lose three, that pain is amplified," he said. "And we are really feeling and sharing that pain across the division and across our entire community."

A memorial service will be held on base, Aguto said. A date hasn't been set yet.

The accident is under investigation by the 3rd Infantry Division and a team from the US Army Combat Readiness Center at Fort Rucker, Alabama.

On Sunday, Aguto said it was "a heartbreaking day" for the division and the entire Fort Stewart-Hunter Army Airfield community.

"We are extremely saddened by the loss of three Dogface Soldiers, and injuries to three more. Our hearts and prayers go out to all the families affected by this tragedy," he said.

The Bradley Fighting Vehicle is a 27-ton armored vehicle designed to carry infantry squads into battle. It can carry six soldiers plus three crew members and is armed with a 25 mm cannon, a TOW missile system and a machine gun mounted coaxially to the cannon.

Fort Stewart, founded in 1940, is the largest Army installation east of the Mississippi River and covers almost 280,000 acres, according to its website. The 3rd Infantry Division, one of the US Army's mechanized infantry divisions, is the base's largest unit.