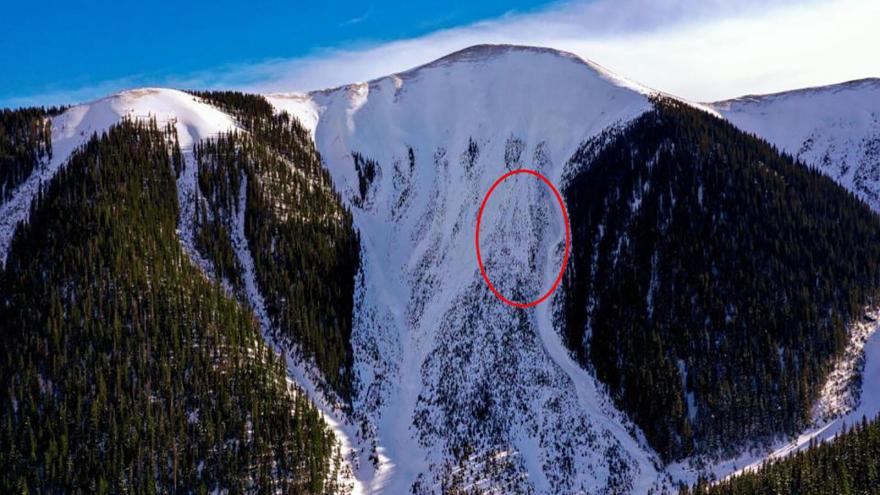 Photo of the north side of the Battleship on December 20. The red circle indicates the area where two skiers were found dead.

(CNN) -- Three skiers lost their lives to avalanches over the weekend during an "especially dangerous" period in Colorado's popular backcountry, officials said.

On Sunday, the bodies of two backcountry skiers were recovered from an avalanche in the North San Juan zone after they were found buried by the snow, according to the Colorado Avalanche Information Center (CAIC).

Police identified the skiers as Albert Perry, 55, and Dr. Jeff Paffendorf, 51, both of Durango, Colorado, according to the San Juan County Office of Emergency Management Facebook page.

They were reported overdue from their trip on Saturday, and that's when rescuers discovered what happened.

"The pair had planned to ski in an area locally known as the Battleship, southeast of Ophir Pass. In the dark from a helicopter, rescuers could see a large avalanche and ski tracks," the CAIC said in a news release.

"San Juan County Search and Rescue and other agencies recovered the bodies on December 20."

Similarly, on Friday, another skier, identified as Jeff Schneider, was recovered after he was caught, buried and killed in an avalanche in the Gunnison zone, according to a news release from the CAIC.

The skier had spoken with two other skiers about their descent plans, but when the pair returned to their snowmobile they realized the victim's snowmobile was still there. CAIC officials said the two backtracked his route and discovered a fresh avalanche. The skier was found but he did not survive.

"Local volunteers and Crested Butte Search and Rescue facilitated the recovery and extrication," said the CAIC.

Since December 15, there have been over 220 reports of avalanches in Colorado's backcountry, according to the CAIC, and most of the zones are ranked "considerably dangerous" for avalanches on their avalanche forecast.

Ethan Greene, Director of the Colorado Avalanche Information Center, told CNN that "this is not a normal year, it's been unusual conditions causing avalanches so far."

"A lot of avalanches were triggered by people this week. More people die in avalanches in Colorado than any other state and this year has been especially dangerous," Greene said.

Officials are urging skiers to pay special attention to the avalanche forecast because of the deaths.