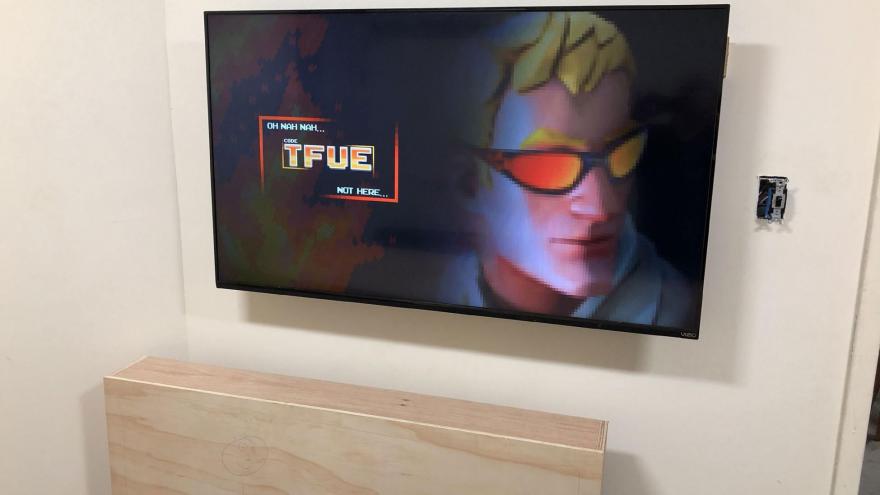 The wall-mounted flat screen TV found in the man cave was connected to a streaming device. A cabinet just below the TV appeared to be constructed to conceal the television, according to the MTA.

(CNN) -- Three railroad employees were suspended without pay for converting a room underneath Grand Central Terminal in New York City into their own personal 'man cave.'

The room was furnished with a wall-mounted TV connected to a streaming device, a futon couch, refrigerator, air mattress, and microwave, according to a report released Thursday by the Metropolitan Transportation Authority Inspector Carolyn Pokorny.

"Many a New Yorker has fantasized about kicking back with a cold beer in a prime piece of Manhattan real estate-- especially one this close to good transportation," Pokorny said in an online statement. "But few would have the chutzpah to commandeer a secret room beneath Grand Central Terminal & make it their very own man-cave sustained with MTA resources, and maintained at our riders' expense."

The Office of the Inspector General (OIG) found:
-- a half-consumed beer in the refrigerator and an empty can in the trash

-- a clear plastic bag filled with sheets and a comforter

The MTA said there is an overwhelming amount of evidence that three Metro- North Railroad employees: a wireman, a carpenter foreman and an electrical foreman used the unauthorized break room several times. It's unclear if employees used the room while they were on the clock.

All three individuals were suspended without pay until their disciplinary hearings, MTA's report said.

The Office of the MTA Inspector General said it received an anonymous complaint in February 2019 about the room. That complaint described the same three specific employees would "hang out and get drunk and party." A second, similar complaint was made in late June 2019.

It's unclear when the unauthorized break room was first created and how long it had been in use.

"The behavior described in the IG's report is outrageously inappropriate and is not consistent with Metro-North's values and the commitment that we have to providing safe, reliable and cost-efficient service to our customers," said Metro-North Railroad President Catherine Rinaldi.

Grand Central Station management told investigators they didn't know the room even existed, let alone that it was a locksmith storage room, according to the report. Officials said the wiring of the TV and the streaming device created a potential fire hazard and that "the MNR Fire Brigade considers an unmapped room for which no one appears to have the key to be very dangerous."

"The risks associated with employees hiding in that room with the door locked create a variety of hazards including the inability of rescue personnel to quickly access the room."