Three months after his wife and son were killed, Alex Murdaugh has 'fallen from grace,' his lawyer says 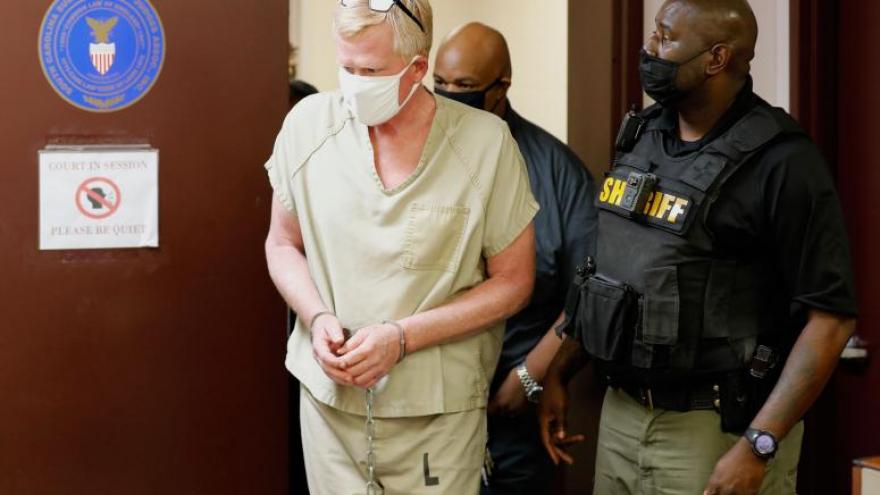 Alex Murdaugh walks into his bond hearing on September 16.

(CNN) -- Alex Murdaugh, the 53-year-old scion of a South Carolina legal dynasty, has seen his life fall apart in three months, with his own attorney saying in court Thursday, "He has fallen from grace."

First, Murdaugh's wife and son were shot and killed in June, prompting an investigation that remains unsolved. Murdaugh, who called 911 June 7 and reported he had found their bodies, according to the South Carolina Law Enforcement Division (SLED), has denied responsibility for their deaths.

According to Murdaugh's attorney, Dick Harpootlian, the deaths of his wife, Margaret, and son, Paul, exacerbated an opioid addiction that put Murdaugh in dire financial straits, leading him to hire a former client to kill him earlier this month so his surviving son could collect about $10 million in life insurance.

Murdaugh survived the shooting. He turned himself in and was arrested Thursday and charged with insurance fraud, conspiracy to commit insurance fraud, and filing a false police report. He was released on a $20,000 bond and is receiving treatment at an out-of-state rehabilitation center, his attorneys say.

The day before the shooting, Murdaugh resigned from his law firm after it was discovered he had allegedly "misappropriated funds," the firm said in a statement previously. SLED has opened an investigation based upon those allegations.

Separately, the investigation into the deaths of Margaret and Paul Murdaugh have spurred SLED to open inquiries into two other deaths in recent years: those of 19-year-old Stephen Smith, whose body was found on a Hampton County road in 2015, and Gloria Satterfield, the Murdaugh family's housekeeper for more than two decades.

All of this has coalesced into a true crime saga that's gripped the country and the southern region of the Palmetto State, where three generations of Murdaughs held office as the 14th Circuit Solicitor for 87 consecutive years.

"Alex Murdaugh has spent his entire life in this county," Harpootlian said Thursday at Murdaugh's bond hearing, arguing his client would not be a flight risk if he was released. He said of his client at one point, "As a result of recent events, he is not a man of significant means any more."

Before his fall from grace, Murdaugh's "wife and son were brutally murdered," Harpootlian said as Murdaugh appeared to wipe tears from beneath his glasses. "And that has had an extraordinary effect on him. So we'd ask you to allow him to go and help heal himself."

Murdaugh's arrest came after court documents say he admitted he had conspired with a man — identified as Curtis Edward Smith — to kill him as part of the fraud scheme.

Murdaugh called 911 on September 4 and reported he'd been shot on a road in Hampton County, according to SLED. Authorities initially described Murdaugh's injury as a "superficial gunshot wound to the head," though Murdaugh's attorneys said his skull was fractured.

An affidavit says Murdaugh allegedly provided Smith with a firearm and directed Smith to shoot him in the head. Smith admitted Tuesday to being present at the shooting and to disposing of the firearm afterward, the affidavit states.

Harpootlian acknowledged the scheme in an interview with NBC's "Today Show" this week, saying Murdaugh "knew what he had done was wrong."

Murdaugh had decided to end his own life but believed his life insurance policy had a suicide exclusion, Harpootlian told NBC. The plan "was an attempt on his part to do something to protect" his only living son.

Smith, 61, has been charged with assisted suicide, assault and battery of a high and aggravated nature, pointing and presenting a firearm, insurance fraud, and conspiracy to commit insurance fraud, SLED said.

On Thursday, Hampton County Magistrate Judge Tonja Alexander set bond for Smith at $55,000. Asked if he was interested in a public defender, Smith replied, "I'm probably going to look at one, yes," adding he would likely apply early next week.

Family of Murdaugh's housekeeper 'viewed him as family,' lawyer says

Eric Bland, an attorney for Satterfield's estate, dismissed Harpootlian's comments Thursday, calling them "lawyer spin" and saying Murdaugh's attorneys are "casting a defense that does not exist."

SLED announced Wednesday it was opening a criminal investigation into Satterfield's death based on a request from the Hampton County coroner highlighting inconsistencies in the ruling of her manner of death, as well as other information gathered during other investigations involving Murdaugh.

CNN has reached out to attorneys for Murdaugh for comment.

Bland said Satterfield, who worked for the Murdaughs for 25 years, died following what was described as a "trip and fall" accident at the Murdaugh home in 2018.

But in its request to SLED, the coroner's office wrote Satterfield's death was "not reported to the Coroner at the time, nor was an autopsy performed." Her death certificate notes the manner of death was "natural," which the coroner wrote was "inconsistent with injuries sustained in a trip and fall accident."

Satterfield's sons have also sued Murdaugh and several others, with Bland alleging Thursday that Murdaugh misappropriated millions in settlements from the family after Murdaugh helped them bring a wrongful death claim against himself.

The lawsuit says that after Satterfield died, Murdaugh introduced her sons to another a lawyer — a friend of Murdaugh's, says the lawsuit — to bring the claim against him.

"Our clients had tremendous trust in Murdaugh. They viewed him as family," Bland told CNN's Erin Burnett Thrusday.

But according to the lawsuit, despite a civil settlement, Satterfield's sons never received any money.

"It's a disgrace, we're going to get to the bottom of it, and we have no sympathy or pity for Alex Murdaugh," Bland said.