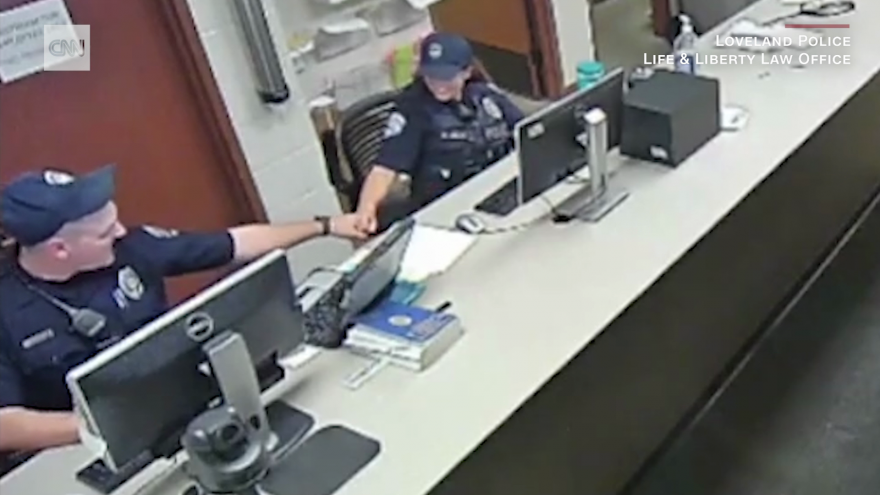 Loveland police officers seen on video fist bumping while having discussions about the arrest of Karen Garner on June 26, 2020.

(CNN) -- Three Colorado officers who laughed at body camera footage of the violent arrest of a 73-year-old woman with dementia are "no longer employed" by the department, Loveland Police Chief Robert Ticer said Friday.

Karen Garner was arrested in June for walking out of a Walmart with $13.88 worth of items, according to a federal lawsuit filed earlier this month. She was arrested and left with multiple injuries, including a broken humerus, a dislocated shoulder and a sprained wrist, according to the lawsuit.

The lawsuit includes video showing Hopp, Jalali and Blackett laughing as they watched the body camera footage of Garner's arrest.

Ticer said Friday that Hopp, Jalali and Blackett are "no longer employed" by the police department. Though the chief would not say whether the officers had stepped down, police spokesman Tom Hacker told CNN the three officers resigned.

"I share the community's concerns on this," Ticer said when asked for his reaction to the bodycam footage. "It hurt to see that. I've been in law enforcement 32 years and what I saw in there hurt me personally."

CNN has reached out to the Fraternal Order of Police and the Loveland Police Officers Association for comment. Justine Bruno, assistant to the Loveland City Manager, said this week that some of the officers named in the lawsuit had retained legal counsel through the police union. Attempts to reach the officers have been unsuccessful.

Hopp had been on the job for one year and Jalali had been with the department for three years, Ticer said.

Sarah Schielke, the attorney for Garner and her family, expressed disappointment in a statement Friday that the three officers were allowed to resign and not fired.

"Despite what the world has seen they did on not one but two horrifying videos, they will still receive benefits paid by Loveland," said Schielke, adding that other officers connected to the incident remain on the job.

CNN reached out to Ticer for comment but there was no immediate response from the chief.

Garner initially filed a federal civil rights lawsuit on April 14 against the city of Loveland and three police officers, including Hopp and Jalali, for alleged excessive use of force. An amended lawsuit filed Sunday added Blackett and another officer to the complaint.

Loveland is about 50 miles north of Denver.

The amended lawsuit included a video showing Hopp, Jalali and Blackett laughing as they watched footage of the June 2020 arrest, according to Schielke.

"We are physically sickened," Garner's family said in a statement earlier this week. "We are angry. Our hearts could not possibly ache any more. Once fiercely independent, happy, carefree and a great lover of the outdoors, she is now fearful, distrusting, reclusive."

"The statements on the videos are very concerning," District Attorney Gordon McLaughlin said.

Ticer said an internal affairs investigation by the city's human resources director and a third party will follow the district attorney's probe.

"Our goal at the Loveland Police Department has always been to make our community proud. We failed and we are very sorry for that," he said Friday.

Part of the video included in the lawsuit was shot in the Loveland Police Department's booking area shortly after Garner's arrest.

In the video, Hopp gave Jalali a fist bump when asked how the arrest went.

"Well, I thought it went great," Hopp said, adding, "I think we crushed it."

Later in the video, as officers began watching, Jalali, who assisted in the arrest, said body camera footage was "like live TV."

Blackett responded, "the bodycam show," as someone giggled.

"Bodycams are my favorite thing to watch. I could watch livestream bodycams all day," Jalali said.

As the three continued watching, it appeared Jalali became uncomfortable with the video.

According to a YouTube transcription of the video, Hopp then asked, "Are you ready for the pop?" as Jalali covered her ears.

The pop referred to something in the video but it's unclear what.

"I hate this," Jalali said.

"This is great," Hopp responded.

Viewing of the video and the conversations about it took place as Garner was 10 feet away in a cell, according to Schielke. She remained in that cell for two and a half hours, the lawsuit said, until she was taken to a hospital.