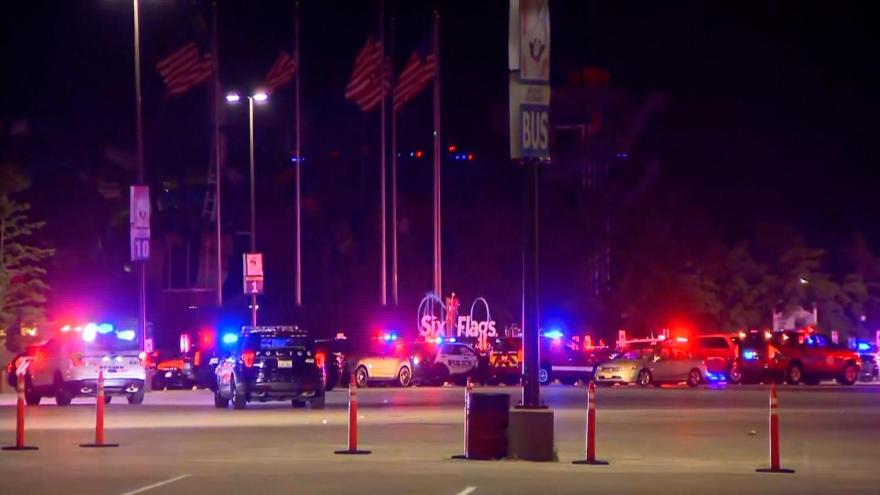 Police in Gurnee, Illinois, say three people were shot outside the entrance to Six Flags Great America on August 14.

(CNN) -- Three people were injured in a shooting in the parking lot of the Six Flags Great America amusement park in Gurnee, Illinois, Sunday night, the park and police confirmed.

At around 8 p.m., the Gurnee Police Department responded to multiple 911 calls reporting shots fired at the park, the department said in a news release. Their initial investigation found a car had entered the parking lot, suspects exited the vehicle near the front entrance of the park, and they began shooting at another individual, police said. The suspects then fled the scene in the car.

A 17-year-old male and 19-year-old female were brought to a hospital with non-life-threatening leg injuries, police said. A third person sustained a shoulder injury and declined to go to the hospital, they said.

"The shooting this evening was not a random act, and appeared to be a targeted incident that occurred outside the park. This was not an active shooter incident inside the park," Gurnee police said.

The park closed early in response to the shooting, Kendziora said. The Northern Illinois Police Alarm System was assisting with clearing the theme park of guests and staff, Gurnee police said.

Gurnee is located about an hour's drive north of Chicago.

Michael Pontrelli and his family were at the park when the shooting occurred. He told CNN he had just gotten off the Superman ride when he witnessed groups of people running away from the entrance.

"Then we (saw a) swarm of parents shuttling their kids, so my family and I hid between these two walls waiting for clearance," he said. "Cops were running in armed and escorting everyone out."

A video captured by Pontrelli shows a heavy police presence outside the park.

In a statement, Kendziora said the park is grateful for the team members who worked to take care of guests and the Gurnee police for their ongoing security presence at the park.

"Six Flags dedicates our greatest amount of time, talent and resources to safety and security," the statement said. "Layers of preventative measures both inside and outside the park are in place for the protection of guests and team members. We continue to review and enhance our protocol on a daily basis to ensure we are providing the highest level of safety."