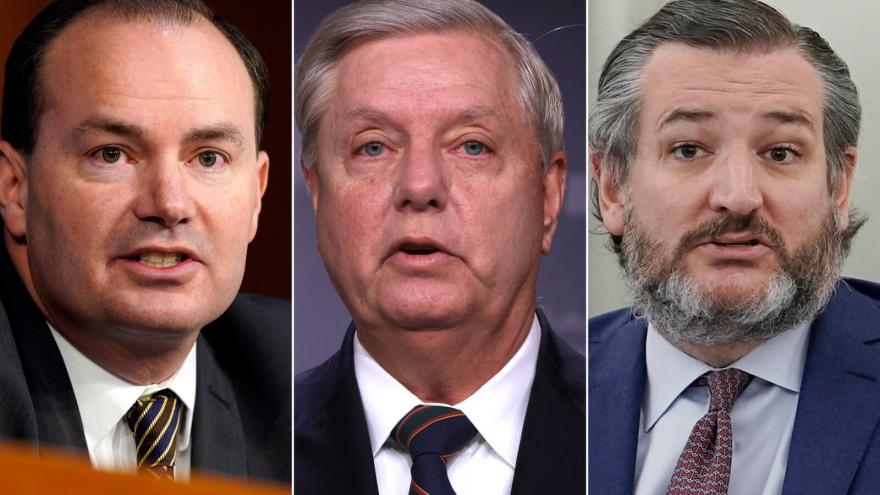 (CNN) -- A trio of Republican senators allied with former President Donald Trump met with his defense team Thursday evening, in the middle of an impeachment trial in which they will vote on whether to convict Trump and potentially bar him from holding public office again.

Sens. Lindsey Graham of South Carolina, Ted Cruz of Texas and Mike Lee of Utah were spotted going into a room in the US Capitol that Trump's lawyers were using to prepare for their arguments.

Trump lawyer David Schoen said that the senators were "very friendly guys" who just wanted to make sure they were "familiar with procedure" on the eve of their rebuttal to the House impeachment managers' presentation.

When asked if it's appropriate to meet with senators during the trial, Schoen said, "Oh yeah, I think that's the practice of impeachment."

"There's nothing about this thing that has any semblance of due process whatsoever," he added.

Some senators view themselves as impartial jurors during impeachment trials, while others lend a hand to their party's side.

Republican senators have already signaled that they will vote to acquit the former President of the charge of "incitement of insurrection," preventing a subsequent vote on Trump's political future. In a 50-50 Senate, the House impeachment managers -- all of whom are Democrats -- need to persuade 17 Republican senators to join every member of their party to convict Trump.

The managers on Thursday showed clips of Trump's speech before the Capitol rampage on January 6, in which he urged his supporters to "fight like hell," "never give up" and "never concede." Many Republican senators point out that Trump also said "to peacefully and patriotically make your voices heard." They've also blamed the rioters rather than the former President for the deadly violence that day.

Cruz said the meeting with the Trump defense team was an opportunity for "sharing our thoughts" about their legal strategy. A wide array of Senate Republicans harshly criticized the defense team on Tuesday, the opening day of the trial, arguing that Trump attorney Bruce Castor had delivered a rambling and unfocused argument in making the case that the proceedings are unconstitutional.

When asked if he's now comfortable with the Trump team's legal strategy, Cruz said, "I think the end result of this impeachment trial is crystal clear to everybody."

"Donald Trump will be acquitted," he added. "It takes 67 votes to convict him and every person in the Senate chamber understands that there are not the votes to convict, nor should there be."