Three dads, a baby and the legal battle to get their names added to a birth certificate 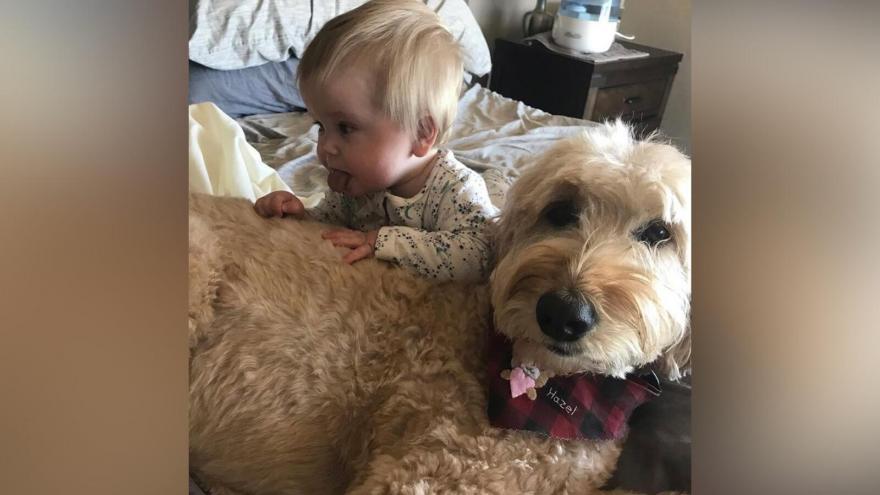 A polyamorous household in California is part of a unique and very modern family that includes three dads, two toddlers, two surrogates and one egg donor. Parker, their son, is seen with Hazel, their Goldendoodle.

(CNN) -- Meet Ian Jenkins and his partners, Alan and Jeremy.

They're a "throuple": a committed polyamorous relationship involving three people.

And after a complicated and expensive court battle to all become legal parents, the trio are raising two toddlers in Southern California -- and proving how families come in all forms.

They're part of a unique and very modern family that includes three dads, two surrogates and one egg donor. In a new book, "Three Dads and a Baby," Jenkins chronicles their search for potential egg donors and a surrogate, and a fight to change a medical and legal system geared toward heterosexual couples.

The three men have all been together for more than eight years. Jenkins says they fought to get all three of their names listed on the birth certificates to protect their parental rights and the rights of their children. The process was emotionally grueling.

"But we are hopeful that other people benefit from the experience we had," he told CNN in a recent interview, "and that it's easier, less expensive and less stressful for them."

Two men and no baby

As a gay teenager in Virginia, Jenkins says he faced death threats after coming out and couldn't imagine he'd ever be able to openly love another man.

"I was completely isolated. I didn't know a single gay person when I was in high school," he says. "I thought I'd never be able to live an authentic life.

"It never occurred to me that people could even have two partners."

He met Alan while they were doing their medical residencies in Boston.

"He was smarter than the other students. It was obvious, even though he wasn't straining to show off his medical knowledge, like half of them were," Jenkins says.

He was drawn to Alan's calm demeanor, witty comebacks and compassion for his patients. In the book, Jenkins recalls being touched by Alan's tender care of a frail old woman who had been hospitalized. He nicknamed her "my Golden Girl."

Their first date was in 2003. Jenkins went to Alan's place with a baking stone, homemade pizza dough and wine, and made him dinner. The couple later decided Boston was too chilly and agreed to move in search of warmer weather. They ended up in San Diego, where Jenkins is an associate professor of medicine at UC San Diego and Alan works at a hospital as a psychiatrist.

"Turns out, the medical center that's the farthest from Boston in the continental United States is in San Diego," Jenkins says. "So here we are."

Three men and a baby

After almost a decade together, Jenkins introduced to Alan the idea of bringing a third man into their partnership. They met Jeremy online, and he joined them in 2012.

Jeremy works in animal medicine at the San Diego Zoo, where his patients range from apes to California condors. To protect their privacy, Alan and Jeremy prefer not to use their last names.

"We knew he was right, but we never took the first step. Then Jeremy entered the picture: a zookeeper and nurturer by trade," Jenkins writes in the book. "With a third voice at the table, our conversations about parenting began to change."

The stress that comes with parenting sounded less intimidating when shared among three people.

"We just didn't have the ovaries," Jenkins writes.

They shared their predicament with one of Alan's childhood friends, a woman named Meghan who offered to be an egg donor. She wanted to remain in the children's lives as a sort of an aunt figure, Jenkins says. Instead of paying her as an egg donor, they agreed to have the three fathers pay for her travel expenses to visit them at least once a year.

Another female friend agreed to be a surrogate, and they were ready to be dads. But the road to fatherhood involved more lawyers, paperwork and money than they'd ever imagined.

Three men, a baby and a legal battle

Over the next few months Jenkins says the family spent nearly $121,000 on contracts, legal fees, medical procedures and tests for their firstborn.

"Gay couples don't stumble into parenthood by accident," he writes in the book. "It's always a deliberate act, and a complicated one."

In addition to numerous legal contracts with the women involved, they also had to fight to get all three men's names on their firstborn's birth certificate. Because the men aren't married everyone involved required a separate lawyer to craft a parenting agreement, Jenkins says.

Under a 2013 California law, a third parent can be added to a birth certificate after a child's birth if it can be shown that recognizing only two parents would be detrimental to the child.

But Jenkins says the judge at a pre-birth hearing was hesitant about setting a precedent by ruling that all three men's names could be on the birth certificate.

Allowing only two parents on the document would deny the third dad any legal rights in connection to the child. It would also force the three men to make a wrenching decision.

At the hearing, the three men asked to be allowed to speak. Fighting back emotion, they explained why it was important for all three to be named as parents. They talked about automatic inheritance, ability to make decisions on medical consents, visitation rights should they split up.

"We could just see in her (the judge's) face that something had changed, that she wouldn't feel comfortable denying one of us parenthood," Jenkins says. "And we could tell right then that she was going to find some way to make it work out for us."

The judge ruled in their favor before their daughter Piper was born in 2017. Jenkins believes they are the first polyamorous family in California, and possibly the country, to be named as the legal parents of a child. CNN has not been able to confirm that.

The trio are settling into their roles as parents. They now have a second child, a boy named Parker, who was born in 2019 -- the product of the same egg donor but a different surrogate.

Parker's birth meant another set of legal contracts among the people involved.

But with Parker, there was no legal battle to get the dads' names added to the birth certificate. The court took care of it without having them come in.

Jenkins says they're forever indebted to the egg donor and the two surrogate mothers for their gift of two biological half siblings.

With multiple fathers, the biological process can be confusing. Jenkins often finds himself trying to explain.

Meghan lives in Tennessee and sees the children at least once a year. They call her "Mama Meghan."

The children have different names for their fathers: Jenkins is Papa, Alan is Dada and Jeremy is Daddy.

As Jenkins notes in his book, Piper seems proud of her unique family.

She once told a preschool classmate: "You have two parents. I have three parents."

... all equal one extraordinary household

The dads and their children share a bustling house with two Goldendoodles named Otis and Hazel.

They benefit from three incomes and more people to share parenting responsibilities. But in other ways their family is just like any other, Jenkins says. He compares it to his growing up as a child of divorcees with three parents in the picture.

"Day to day in our home, everything is very ordinary," he says. "There's just people making dinner, going out to the hot tub with the kids, reading books, playing with toys. It's just these three parents instead of two or one. "

While Jenkins is worried that their children may be treated differently because of their unique relationship, he says they haven't had any issues so far.

"We've had zero negative feedback from coworkers and friends. Everyone seems to just be delighted about the arrangement and that's because they know us," Jenkins says. "I think some people will look at this and say like, 'Oh, this is exotic. It's going to harm the child.' But people who know us know that we have been taking care of these kids as best as we possibly can."

After the long journey to become fathers, the three men are now navigating fatherhood like any other parent. Their goal is to ensure they have consistent rules and parenting styles.

"We knew that if there were three of us, the usual issue where a kid can play parents off each other becomes multiplied," says Jenkins, 45.

Jeremy, 37, is currently the "popular" dad -- Piper follows him around like a little shadow. Alan, 43, loves to read the children stories, creating different accents for each character. And Jenkins' favorite thing now is teaching Piper how to read.

If he were to send a message to his teenage self, Jenkins says, he'd tell himself that life gets better.

That however hopeless things may seem as a young gay man struggling to fit in, the world is changing. And that he'll someday find more love under one roof than he ever imagined.