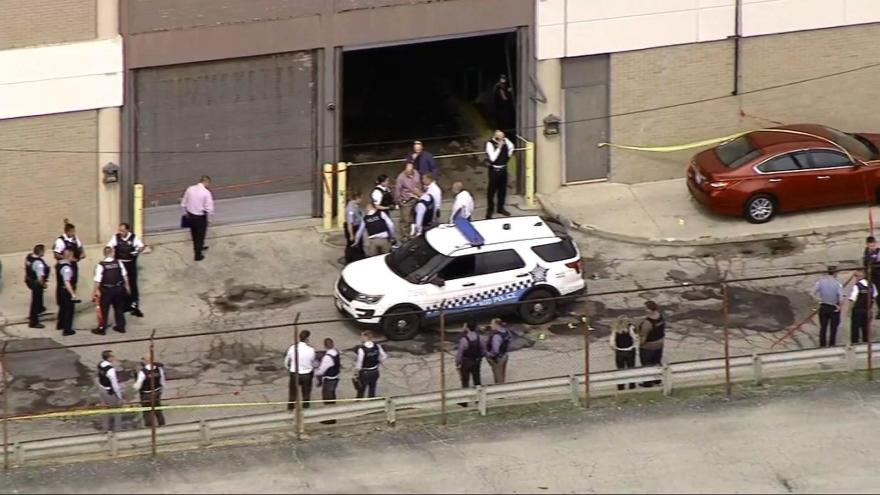 One officer was shot in the chin and protective vest, another was hit in the hip and a bullet struck a third officer's protective vest, according to Brown. The three were transported to hospitals, along with two other officers with chest pains.

Their conditions were not immediately released.

Dr. Samuel Kingsley, a trauma surgeon, told reporters that an officer with a wound to the left side of the neck was placed on a breathing tube and doctors were stabilizing him.

A suspect was also shot and taken to a hospital, Brown said. His condition has not been released.

The shooting happened about 9:40 a.m. as officers tried to take the suspect -- described as a violent car-jacking offender -- into custody outside a police station on the Northwest Side, Brown said.

The officers had spotted a car from a June 26 carjacking downtown. The gunfire erupted as they were taking the suspect into custody, according to Brown. "Officers got behind this car, identified it as that carjacking vehicle, stopped the car, put the suspect in custody and then the rest transpired after that," Brown said.

Investigators were still trying to sort the details of the confrontation, Brown said.

"I want to strongly emphasize the inherent dangers that these and all Chicago police officers experience every, every day protecting the residents of Chicago," the superintendent said.

Mayor Lori Lightfoot asked city residents via Twitter to join her in prayer for the officers.

"Today is a searing reminder of the danger our men and women of our Police Department face every day they put on their uniforms and leave their homes," she wrote.

"This is the sacrifice they make in order to serve and protect our city and fellow residents."

President Donald Trump last week said he planned to send federal law enforcement to Chicago and other cities that are, in his words, "all run by very liberal Democrats," to try to crack down on violence.

Lightfoot said the government could help by cracking down on illegal guns, but she warned against the type of involvement seen in Portland, Oregon, where federal law enforcement's presence and aggressive tactics have brought criticism from the city's mayor and prompted an angry response from crowds protesting racial inequality and police brutality.

The shooting was the latest in a spate of gun violence in Chicago and other major US cities in the past few months that coincided with the end of Covid-19 lockdowns, mass protests against police brutality and the arrival of summer, when crime annually increases.