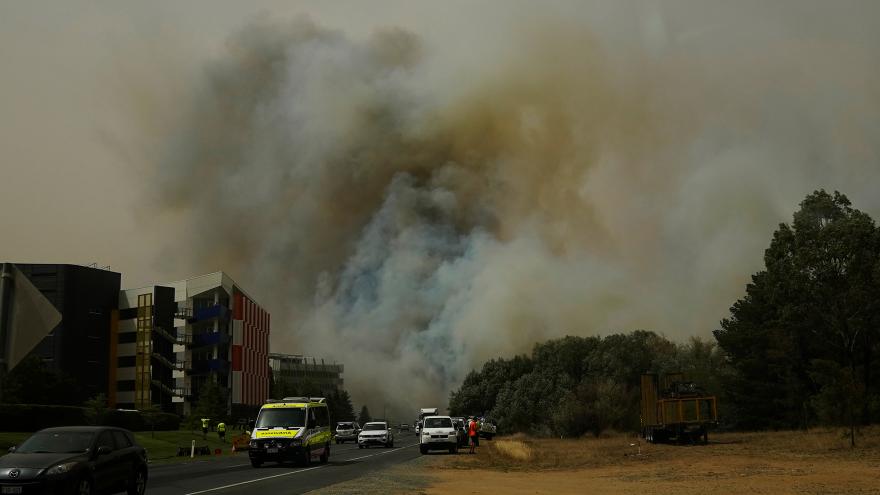 (CNN) -- Three American crew members have died in Australia after an air tanker crashed in the state of New South Wales, where fires continue to burn out of control.

The water-bombing tanker had been chartered by the New South Wales Rural Fire Service (NSW RFS), state Premier Gladys Berejiklian said in a news conference on Thursday. It was called in to fight a bushfire near the town of Cooma, in the state's southeast.

The Australasian Fire and Emergency Service Authorities Council told CNN the casualties were American. The crew members belonged to Coulson Aviation, an aerial firefighting company that owned the aircraft contracted to the NSW RFS.

Coulson Aviation said in a statement that the crew had been on a firebombing mission when the accident occurred.

According to the NSW RFS commissioner, Shane Fitzsimmons, contact was lost with the C-130 water-bombing plane shortly before 1:30 p.m. local time on Thursday.

"Tragically, there appears to be no survivors as a result of the crash down in the Snowy Monaro area," Fitzsimmons said in the news conference. "It's impacted heavily with the ground. And initial reports are there was a large fireball associated with the impact of the plane as it hit the ground."

The cause of the crash is not yet clear.

Traci Weaver, a United States public information officer with firefighting teams on the ground, called the crash a "heartbreaking" incident.

"We're just here taking care of our folks," she told CNN. "And it hits close to home when it's Americans too -- as tight a family as we are in the firefighting community -- it's just hard."

Fires have been burning in the state for months, and several countries have sent personnel and firefighting assistance, including the US and New Zealand.

The US announced Wednesday it was sending two more 20-person crews to Australia, only days after sending air support personnel and other emergency management teams. So far, the US has deployed more than 200 staff to Australia, according to the National Inter-agency Fire Center.

The Canberra airport closed on Thursday, with arrivals and departures grounded as bushfires burned nearby. One of the fires, only a few miles away, is "out of control" and has reached an emergency alert level, according to the territory's emergency agency.

The airport has not been evacuated, but closed "due to aviation firefighting operations," it said in a tweet. Photos from the airport show planes grounded on smoky runways, and the entire city shrouded in a thick, reddish haze.

Authorities have advised residents in the area to seek shelter, warning that roads are closed and that "it is too late to leave."

"The fire may pose a threat to all lives directly in its path," the ACT Emergency Services Agency said. "People in these suburbs are in danger and need to seek immediate shelter as the fire approaches."

The emergency-level fire began on Wednesday, but worsened on Thursday due to strong winds and high temperatures, according to CNN affiliate Seven News.

It rained mud in Melbourne

Much of southeastern Australia -- where Canberra is located -- has been battered by severe weather for the past week. Canberra was hit by a hailstorm on Monday, with hailstones the size of golf balls shattering car windows and injuring scores of birds.

There have also been heavy winds all week -- apart from exacerbating the persistent and widespread fires, the wind created apocalyptic scenes of massive dust storms engulfing towns last Sunday.

Australia has been gripped by a devastating drought since 2017 -- which has not only destroyed livelihoods, but has left the land parched and dry, full of loose soil and dust that are easily whipped up into the air by wind.

In normal conditions, dust storms are not common occurrences. But because of the drought and wind, they are happening more and more frequently in Australia. The major city of Melbourne, south of Canberra in the state of Victoria, was hit with a dust storm on Wednesday night and then rain on Thursday, creating a whole new kind of weather disaster.

The dust had been spread in the air by the wind -- so when the rain came, it combined into a rust-colored sludge of mud that coated the city. Photographs from Melbourne show the Yarra River turned completely brown with the dust-mud, and cars covered with dirt. People woke up to see their household pools and bird baths filled with brown dusty water.

The Australian Open, now in its fourth day, even had to delay matches for several hours because the outdoor courts were covered with mud. Staff at the tennis tournament rushed to clean the court with towels, hoses, and "high pressure cleaning," finally opening it back up to matches in the late afternoon.

There are "damaging winds" across much of the state on Thursday, with the strongest wind gust reaching 85 miles per hour in a national park northeast of Melbourne, according to the Victoria Bureau of Meteorology. Milder winds are forecast for Friday and across the weekend.