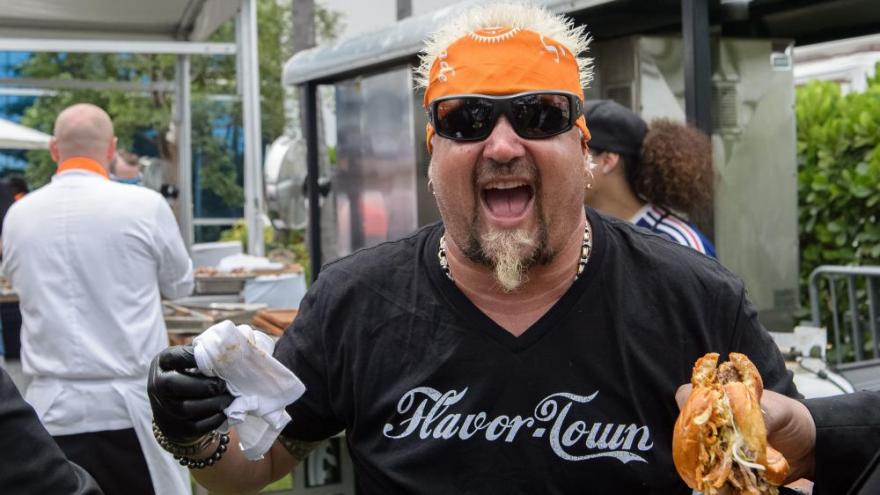 Guy Fieri, the celebrity restaurateur and TV host, is known by his nickname, "The Mayor of Flavortown."

(CNN) -- The city of Columbus, Ohio, has already vowed to bring down its statue of Christopher Columbus. But thousands are hoping to erase the city's connection to Columbus' legacy even further by renaming it Flavortown in honor of Columbus native Guy Fieri.

As the widespread conversation around police brutality and racial inequality continues into another week, statues of Columbus are being brought down across the nation to bring awareness to the cruelty he brought upon Indigenous people.

Columbus Mayor Andrew Ginther announced earlier this week that the statue outside City Hall would be removed and placed in storage.

"For many people in our community, the statue represents patriarchy, oppression and divisiveness. That does not represent our great city, and we will no longer live in the shadow of our ugly past," Ginther said in a statement, according to CNN affiliate WTTE.

But for Tyler Woodbridge, who spent over seven years of his life in Columbus, the statue's removal wasn't enough.

"Even though it's my favorite city, I was always a bit ashamed of the name," Woodbridge told CNN.

So the 32-year-old started a petition to rename the city to Flavortown in honor of Fieri, the celebrity restaurateur who was born in Columbus. Fieri's use of the expression on his various shows on The Food Network has become his signature catchphrase.

Woodbridge described Fieri as a very "charitable man," pointing to the fact that the famous restaurateur has helped raise more than $20 million for restaurant workers during the pandemic and that he's officiated more than 100 LGBTQ weddings.

"That kind of optimism and charitable work embodies more of what Columbus, Ohio, is about rather than the tarnished legacy of Christopher Columbus," Woodbridge said.

But the fact that Flavortown came from Fieri is a bonus and not the main reason why he's pushing for the name, Woodbridge said. Describing the city as a "melting pot" of different cultures and nationalities, Woodbridge said the name would honor the city's "proud heritage as a culinary crossroads and one of the nation's largest test markets for the food industry," according to the petition.

As of Sunday afternoon, more than 17,400 have signed the petition and it grabbed the attention of Budweiser, which offered to give out free Bud Light Seltzer to all the city's residents if the name is officially changed to Flavortown.

Woodbridge, who currently lives in Murfreesboro, Tennessee, said he's planning on driving back up to his hometown soon to deliver the printed petition to city officials.

Others have proposed changing the city's name after an Indigenous figure, which Woodbridge says he supports. All he really wants is for the city to no longer be named after Columbus.

"We as a culture in America are waking up to how bad of a person he was," Woodbridge said. "Now is the time for progressiveness. It's a time for change."