Thousands of emails from and to Fauci during the pandemic's early days were published. Here's what they show about him 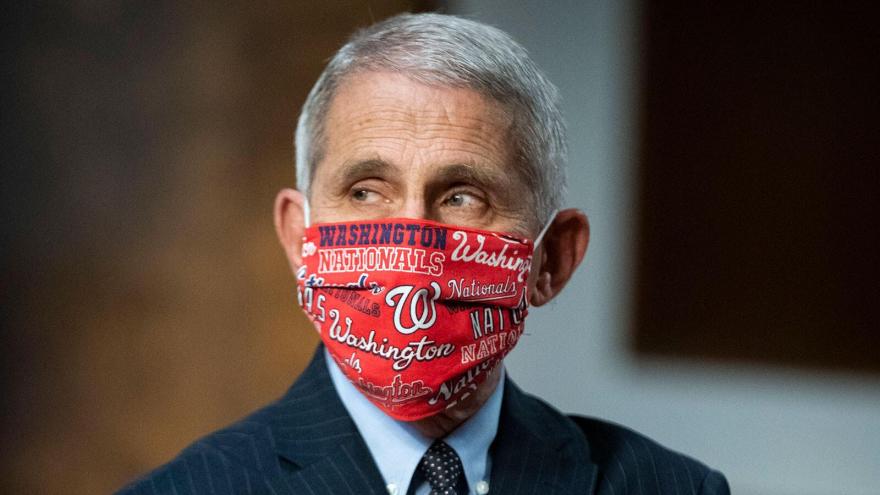 Dr. Anthony Fauci, director of the National Institute of Allergy and Infectious Diseases, arrives to a Senate Health, Education, Labor and Pensions Committee hearing on June 30, 2020 in Washington, DC.

(CNN) -- Dr. Anthony Fauci was a regular on American televisions as the pandemic unfolded across the country and millions looked to the leading expert for insight and guidance on how to defeat the virus.

He was fielding dozens of questions every day off screen too, answering emails from team members, former colleagues, old friends, reporters, producers, celebrities -- and sometimes strangers desperate for advice or looking to leave a note of "thanks."

While many federal government staffers prefer the phone to email, this correspondence offers a rare glimpse into Fauci's frantic schedule and polite, to-the-point demeanor during the time he emerged as a rare source of frank honesty within the Trump administration's Covid-19 task force.

But they also reveal the weight that came with the role.

"This is White House in full overdrive and I am in the middle of it," Fauci wrote in a February 2 email published by BuzzFeed. "Reminiscent of post-anthrax days."

Two days later, responding to a journalist, he writes, "I am really tired. Not much sleep these days."

'Am hanging in there'

The director of the National Institute of Allergy and Infectious Diseases -- and a doctor for the National Institutes of Health for more than 50 years -- Fauci had worked under six US presidents including then-President Donald Trump before he became the public face of the federal response to Covid-19.

It didn't take long for questions to come streaming into his inbox, often from news stations across the globe and radio shows asking for several minutes of his time for an interview.

Howard Bauchner, editor-in-chief of JAMA emailed Fauci on February 5 with a note at the bottom, "You surviving -- worried a bit about your workload."

"Am hanging in there," Fauci replied, according to the emails obtained by BuzzFeed. "Feels like my internship and first year residency when I was on every other night and every other weekend, but actually never left the hospital because the patients were so sick."

Several weeks later, National Institutes of Health Director Dr. Francis Collins, Fauci's boss, attached a short reminder at the end of his email to Fauci: "Get some sleep!"

In an interview with CNN's Wolf Blitzer in June, Fauci called the work "exhausting."

"I'm chronically fatigued, I don't get a lot of sleep," he said. "I'm constantly briefing, talking, doing things, hopefully getting the right cause out."

And if the exhaustion ever turned to frustration, Fauci certainly never let it show. His exchanges -- however short -- always seemed pleasant. "Let us discuss," he'd signal to his team when a new request came in. "Thank you for your note," was often his response to the scores of thankful notes streaming in.

'Do not hesitate to call or email'

Despite a plate already overflowing with a pandemic raging out of control, Fauci found the time to respond to notes of support and questions for medical advice -- even when they came from complete strangers.

When someone reached out on March 4 with a question on whether pneumonia vaccines could provide some protection against severe Covid-19, Fauci responded in detail about an hour later.

"Oh my god," the person wrote back, according the emails published by BuzzFeed. "I honestly never expected you to reply and I thank you from the bottom of my heart for being so generous."

When a doctor emailed him in late February suspecting a patient may have coronavirus, Fauci advised on next steps, the emails published by BuzzFeed show.

"Do not hesitate to call or e-mail me," he signed off.

To those who reached out fearful of what could be coming, Fauci was honest -- both about what experts knew and didn't know.

"The really critical issue is what the mortality rate actually turns out to be," he wrote in a March 2 email published by BuzzFeed. "I am hoping for a considerably lower mortality rate, but that might be wishful thinking. Whatever it turns out to be, the major tools that we have are public health measures, particularly social distancing, which we have to start doing right now."

At the time, he said, one vaccine candidate was soon starting their Phase 1 trial but added a "vaccine is out of the question for at least a year or more."

'I have never been muzzled'

The veteran doctor earned scores of supporters and detractors as he held firm against an at times overly optimistic Trump who frequently sought to downplay the severity of the pandemic.

Fauci and Trump disagreed on how to approach the pandemic, what the correct message was for the American people and how to balance reopening with preventing further contagion. Through it all, Trump insisted he respected Fauci but disagreed with his approach. But at their relationship's low point, Trump suggested he was considering firing him. Attacks from Trump's allies led to enhanced security. In August, Fauci told CNN's Sanjay Gupta he had to get security protection after his family received death threats and harassment.

When a Chinese health official reached out in concern, Fauci replied, "All is well despite some crazy people in this world," according to an April email obtained by BuzzFeed and the Post.

Despite it all, Fauci maintained he was never influenced by politics or deterred from speaking the truth.

When a columnist emailed in late February asking whether Fauci had received orders to get approval before speaking publicly about the virus, Fauci said, "I have never been muzzled or told that I could not speak out publicly about anything during this administration," according to emails published by BuzzFeed.

After a March 1 email from a psychologist expressing concern about whether Fauci was being censored, he responded, "I can assure you that I am not being censored."

As the former President's time in office began to wind down, aides restricted how much Fauci could appear on television to offer warnings and disinvited him from briefing Trump in the Oval Office.

Their turbulent relationship stands in stark contrast to President Joe Biden's elevation of Fauci to chief medical adviser -- a role where he's been free to promote public health advice without scorn from the Oval Office.

During his first press conference under the Biden administration, Fauci signaled the days of overconfidence and loose facts were over.