Though Jacob Blake's health is progressing, his family says national reform is not 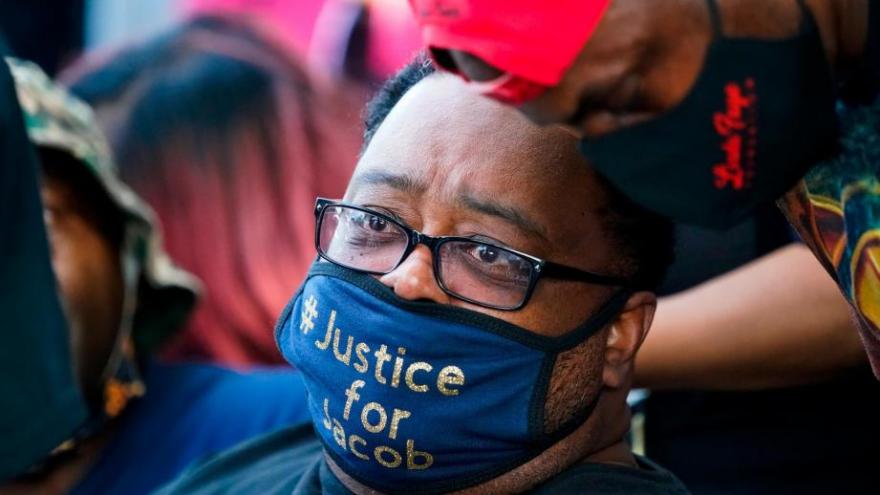 (CNN) -- More than a week after Jacob Blake was shot, his family said his life is no longer in danger -- but still so few of their questions have been answered.

"He's slowly but surely able to talk a little better, able to stay up a little longer, hold the hand of his father," Justin Black, his uncle, told CNN's John Berman on Tuesday. But even when Blake does talk, he added, he can't seem to get past questions around the incident that put him in the hospital.

On August 23, Blake, a Black man, was shot seven times by a White police officer in Kenosha, Wisconsin, leaving the 29-year-old paralyzed from the waist down. Calls for justice broke out in the city, and an arrest was made after two protesters were shot. Though President Donald Trump visited the city Tuesday, he did not meet with the Blake family and members said they don't feel enough has been done.

"If we're not talking about laws of reform -- immediately reforming some of these police -- then really I don't want to speak to you at all," Blake's father, Jacob Blake, Sr., told CNN's Don Lemon Tuesday. "But if you're talking about some reform, you can sit down with me. We can have some coffee or tea."

Blake said he wants the conversation to stay on creating a fairer justice system instead of political stunts. But he did criticize Trump not publicly mentioning his son by name during his visit.

"My son's name is Jacob Blake, if you didn't mention it you don't care about it," he said.

Blake's family said he posed no threat to officers, and they don't think there will be justice until there is a conviction of the officer, who was placed on administrative leave.

"The Blake family is pushing for an indictment of the officer that took liberties to shoot our nephew unarmed seven times in the back. That looks like justice to get an indictment, but not to us," Justin Blake said. "We want him to be convicted. We want him to go to jail."

His uncle said Blake asked the other night why officers shot him so many times.

The Kenosha Professional Police Association alleges Blake fought with officers trying to arrest him, put one officer in a headlock and carried a knife he refused to drop when ordered to do so.

Raysean White, who recorded video of Blake being shot, has said he didn't see Blake holding a knife or harming officers, but he saw only part of the incident.

An attorney for the family, Patrick Salvi Jr., took issue with Trump's description of the officers as golfers who choke and miss a put and the incident as a "kill or be killed" situation.

The officers had minutes, not seconds, to make decisions, he said. And video shows the officers were not in danger from Blake.

"At no point in time was Jacob's momentum towards the officers. And what you see is that the officer is pulling on his shirt and then fires those seven bullets into Jacob's back. If he was concerned that Jacob had a knife, why wouldn't he back away?"

Blake appears to have told officers that he had a knife in his possession, the Wisconsin Department of Justice Division of Criminal Investigation has said. Investigators later "recovered a knife from the driver's side floorboard" of Blake's vehicle and no other weapons were found, the agency said.

Two videos have been released showing the encounter between Blake and police, but another attorney for the family, Ben Crump, said another video will clear up misconceptions and show that Blake was trying to get away from officers.

Politicization of the shooting is only sowing more division, family says

Before Trump's visit, Blake's family and friends said the President was not there to ease the tensions in the city.

"We don't need more pain and division from a President set on advancing his campaign at the expense of our city," Justin Blake said Tuesday. "We need justice and relief for our vibrant community."

"President Trump is trying to stir up more division and chaos," Tanya McClean, a Kenosha resident and friend of the Blake family, said.

Trump's visit did not put Blake in the primary focus, an attorney for the family, B'Ivory LaMarr, told CNN's Jim Acosta.

"This is a local issue. It started as a local issue, but now it is a national issue," he said. "So if we're really about looking for meaningful change, then we would expect that not only the local leaders look to find solutions in that capacity but also the national leaders and a president to be the head on making sure that we effectuate that type of change."

Wisconsin lieutenant governor says the division is a political ploy

The state's lieutenant governor said it is no accident that division and fear seemed to him to be the focus of the visit.

"Fear is the only thing he has in his pocket," Lt. Gov. Mandela Barnes told CNN's Chris Cuomo Tuesday.

While Barnes said Wisconsin has lost its way, he added the state has a long history of being progressive when it comes to racial justice, citing the state's title as the first to declare the fugitive slave act unconstitutional.

Though he said Trump's visit was based "solely on desperation" for the upcoming election, he is confident it won't work.

"The great people of Kenosha, the kindhearted people of Wisconsin that you've come to know, they are ready for a better future for all of us," he said. "The more we push, the more we fight, the more we work, the more likely we are to realize that future where racial justice is at the forefront of conversations."