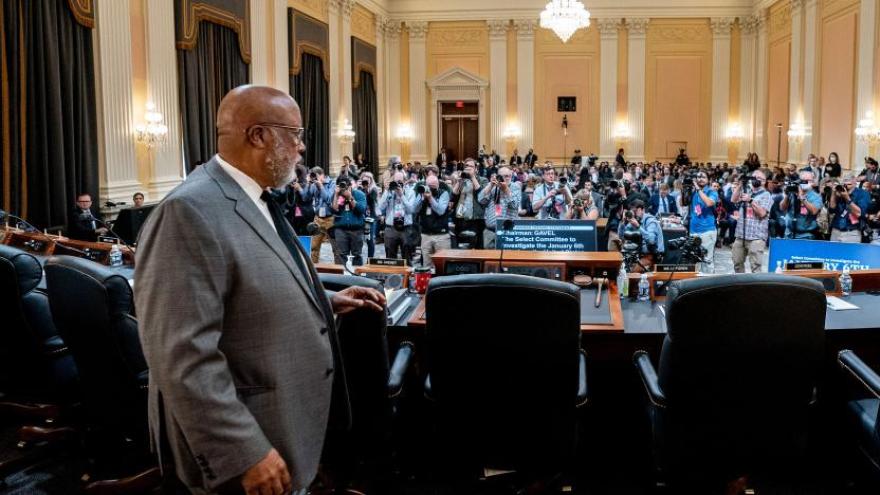 (CNN) -- The chairman of the House select committee investigating the January 6, 2021, attack on the US Capitol told reporters Monday that the panel will not make any criminal referral of former President Donald Trump or anyone else to the Justice Department -- a claim that met swift pushback from members of the panel.

"No, you know, we're going to tell the facts. If the Department of Justice looks at it, and assume that there's something that needs further review, I'm sure they'll do it," Democratic Rep. Bennie Thompson said when asked whether the committee would refer Trump or others to the department.

Pressed again on whether the committee would ever make a formal referral to the Justice Department, the Mississippi Democrat said, "No, that's not our job. Our job is to look at the facts and circumstances around January 6, what caused it and make recommendations after that."

While Thompson drew the distinct line, his statement drew quick reactions from members of the committee, revealing the panel is split over how to handle a potential referral of the former President and his associates for prosecution. The committee this month is holding a series of hearings that are designed to show Trump was at the center of a conspiracy to prevent the certification of the 2020 presidential election results and the peaceful transfer of power.

Rep. Liz Cheney, who serves as vice chair of the committee, released a statement contradicting the chairman's comments. "The January 6th Select Committee has not issued a conclusion regarding potential criminal referrals. We will announce a decision on that at an appropriate time," the Wyoming Republican tweeted.

The comment marked a rare public break between the two leaders of the committee.

A spokesperson for the committee told CNN in a statement that "the Select Committee has no authority to prosecute individuals, but is rather tasked with developing the facts surrounding the January 6th riot at the Capitol. Right now, the committee is focused on presenting our findings to the American people in our hearings and in our report. Our investigation is ongoing and we will continue to gather all relevant information as we present facts, offer recommendations and, if warranted, make criminal referrals."

"You know, I haven't seen the chairman's statements," Schiff told CNN's Anderson Cooper. "We haven't had a discussion about that, so I don't know that the committee has reached a position on whether we make a referral or what the referrals might be. I thought we were deferring that decision until we concluded our investigation. At least that's my understanding."

Rep. Elaine Luria, a Virginia Democrat, went a step further, tweeting, "Our committee has yet to vote on whether we will recommend criminal referrals to the Department of Justice. If criminal activity occurred, it is our responsibility to report that activity to the DOJ."

For his part, Democratic Rep. Jamie Raskin of Maryland, told CNN that the panel is "less concerned with whether or not there was a specific statutory offense committed than making clear to the public that there was no rational basis upon which anyone could conclude that (Trump) had actually won the election."

While Thompson in his comments ruled out the committee formally asking the Justice Department to investigate a crime, he made it clear that the panel is still uncovering evidence that the department can act on as it sees fit.

"It's a public document. Anybody can have access to it. And if they want, after reviewing it, to come back and ask to talk to some of the staff or the members who helped produce the report, I'm sure they will," Thompson said.

Attorney General Merrick Garland said earlier Monday that he plans to watch all of the committee's hearings and that prosecutors handling criminal cases stemming from the insurrection are also watching.

The attorney general, who has faced mounting pressure from Democrats to pursue a criminal case against Trump and his allies related to the January 6 attack, declined to comment on new evidence provided by the committee. He pointed to long-standing Justice Department operating procedure of not commenting on ongoing investigations, saying: "We do that both for the viability of our investigations and because it's the right thing to do with respect to the civil liberties of people under investigation."

Two dozen leading Democrats previously told CNN that Garland may have missed his moment to bring criminal charges against top Trump administration officials before the effort would get caught up in the 2024 presidential campaign jockeying set to begin later this year, after the midterm elections.