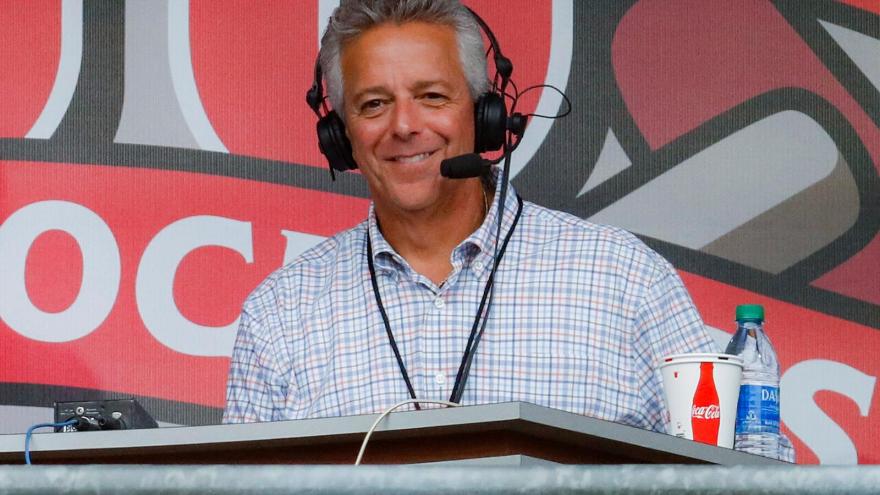 Thom Brennaman, shown in a photo from September, issued an on-air apology during the fifth inning.

(CNN) -- The Cincinnati Reds have announced the suspension of a broadcaster after he uttered an anti-gay slur on the air Wednesday.

Play-by-play announcer Thom Brennaman could be heard saying on the Fox Sports Ohio broadcast, "One of the f*g capitals of the world," before then resuming his on-air duties. It's unknown what led to that remark and the context behind it.

"I would like to sincerely apologize for the inappropriate comments I made during last night's telecast. I made a terrible mistake. To the LGBTQ community, and all people I have hurt or offended, from the bottom of my heart, I am truly sorry. I respectfully ask for your grace and forgiveness," the statement said.

The comment was made after a commercial break during a doubleheader between the Reds and the Kansas City Royals in Kansas City, Missouri.

The Reds released a statement, saying that the "organization is devastated by the horrific, homophobic remark."

During the second game of the doubleheader, Brennaman "was pulled off the air, and effective immediately was suspended from doing Reds broadcasts," the organization said in the statement.

Video that contained his remarks was posted to Twitter, and #FireThom began trending.

In the top of the fifth inning, following a commercial break, Brennaman, who in addition to calling Reds' games also works for Fox Sports, apologized before he went off the air.

"I made a comment earlier tonight that I guess went out over the air that I am deeply ashamed of," Brennaman said. "If I have hurt anyone out there, I can't tell you how much I say from the bottom of my heart I'm so very, very sorry. I pride myself and think of myself as a man of faith."

After calling a home run that happened in the midst of his statement, he continued.

"I want to apologize for the people who sign my paycheck, for the Reds, for Fox Sports Ohio, for the people I work with. For anybody that I've offended here tonight, I can't begin to tell you how deeply sorry I am.

"That is not who I am and never has been, and I'd like to think maybe I could have some people that can back that up. I am very, very sorry and I beg for your forgiveness."

The Reds also said they will address their broadcasting team in the coming days and apologized to the "LGBTQ+ community in Cincinnati, Kansas City, all across this country, and beyond."