This year, at least six states are trying to restrict transgender kids from getting gender reassignment treatments 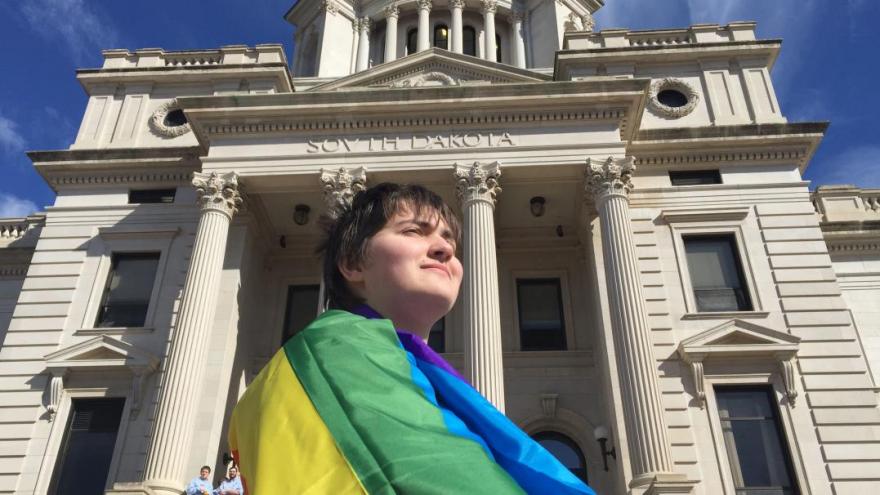 Since the start of the 2020 legislative session, at least six states have proposed to restrict transgender minors' access to gender reassignment treatments, including surgery and hormone therapy.

(CNN) -- State lawmakers can't stop fighting about the rights of their transgender citizens: Their access to bathrooms. The sports they can play in school. Whether businesses can turn them away because of their gender identity.

But they've never weighed restrictions to transgender healthcare that are this extreme.

Since the start of the 2020 legislative session, at least six states have proposed to restrict transgender minors' access to gender reassignment treatments, including surgery and hormone therapy. Some bills would make it illegal for physicians to administer the treatments. Others would classify the act as child abuse.

The number of states contemplating whether to restrict transgender youths' access to healthcare is "unusual," said Ryan Thoreson, a Yale Law School lecturer and an LGBT rights researcher at Human Rights Watch.

No states have enacted a blanket ban on gender reassignment treatment for transgender minors. But the sheer volume of proposals this legislative session is concerning, he said.

"There are alarming signals that things like this could pass in conservative states," Thoreson told CNN.

The first vote happens this week

The bill would make it a misdemeanor for physicians or any medical professionals to perform gender reassignment surgeries on minors or provide patients 16 and younger with hormones, even if the minor is emancipated.

Of the 105 members of South Dakota's state legislature, nearly half of them sponsored the bill.

It advanced in the South Dakota House Affairs Committee by a vote of 8-5, Thoreson said, and moves to the floor next.

"The solution for children's identification with the opposite sex isn't to poison their bodies with megadoses of the wrong hormones, to chemically or surgically castrate and sterilize them, or to remove healthy breasts and reproductive organs," Rep. Fred Deutsch, the bill's primary sponsor, said in a statement to CNN. "The solution is compassionate care, and that doesn't include catastrophically and irreversibly altering their bodies."

Deutsch, who in 2016 proposed restricting transgender students' bathroom access in public schools, said he proposed this measure after some studies on the safety of puberty-blocking hormones were inconclusive.

"The bill will serve as a pause button until the minor is old enough to make informed decisions," he said.

The bill does, though, allow doctors to perform surgery on infants who are born intersex, which means they possess reproductive or sexual anatomy that doesn't align with the male and female standard.

Other bills are on the way

Senate and House bills in Florida would make performing gender reassignment therapy a felony. Bills in Oklahoma and South Carolina would strip physicians, nurses and other healthcare professionals of their licenses if they participate.

Missouri has proposed no fewer than five laws, four of them identical, that ban healthcare providers from performing gender reassignment treatments and would classify parents who sign off on the treatments as child abusers.

Those state legislatures are ruled by a Republican majority.

A similar bill, aimed to "protect minors from mutilation and sterilization," was proposed in Colorado. The General Assembly there is led by a Democratic majority.

"I'll fight against those who try to take away necessary healthcare," she said. "I will not let legislation like this try to erase you."

CNN reached out to Sen. Dennis Baxley in Florida and Rep. Stewart Jones in South Carolina, both of whom sponsored their states' bills. Neither of them were available for comment.

The bills are nearly identical in language

Access to healthcare might be the latest, and perhaps most extreme, attempt to curb transgender rights among state legislatures.

In 2015 and 2016, lawmakers fixated on trans students' access to bathrooms. More recently, they panicked about trans student athletes competing in sports as their identified gender.

"These attacks on transgender youths tend to seize on whatever can be sensationalized to the general public," Thoreson said. "This year, I think, the issue they've chosen to seize upon is basic healthcare for trans kids."

Many of the bills proposed this session are nearly identical in language and their provisions, which Thoreson said is proof that lobbyists are centering their efforts on restricting access to hormone therapy and gender reassignment surgery.

It's also possible, he said, that state legislators are emboldened by the Trump administration's proposed rollback of healthcare protections for transgender citizens.

In May, the administration moved to end discrimination protections for transgender patients. The proposition was struck down, but the US Department of Health and Human Services has proposed ending protections since.

They have consequences for trans kids

If these bills pass, though, the barriers to healthcare access could prove devastating to transgender children.

Studies have shown that transgender youth who are experiencing gender dysphoria -- the belief that the gender they identity with doesn't match the gender they were assigned at birth -- are more likely to feel depressed or anxious, harm themselves or attempt suicide.

"The reason these bills that are being considered right now are so harmful is that they completely remove the possibility of trans youth from getting the care that they need," Thoreson said.

Many of the bills, including the bill proposed in South Dakota, limit both patients who've been emancipated and children who have parental consent to receive the treatments.

"For a lot of transgender youth, receiving hormone treatment or other medical care is truly a matter of life and death," Thoreson said. "Politicians are gambling with trans children's lives by restricting their access to healthcare."

A larger conversation about the rights of trans kids could inspire the same advocacy that largely tanked state bathroom bans, Thoreson said.

"I think that we've seen extreme bills like this get defeated before, usually in response to public outcry," he said.

For all the commotion over trans people's access to public bathrooms, only North Carolina passed -- and eventually repealed -- restricted access to gender-specific bathrooms. Democratic Gov. Roy Cooper called it a "dark cloud hanging over" the state that had stained its reputation.

Thoreson pointed to previous efforts in South Dakota to curb transgender rights: In 2019, a proposed ban on transgender athletes competing as the gender they identify with was met with sharp derision. Local school board officials and an order of Catholic nuns testified against it, and the bill was defeated.

Deutsch said he's not sure whether his latest bill will pass, though he said he's received support from transgender adults and "former transgender people."

"There's a low tolerance of these bills that feel like the bullying of transgender youths," he said. "The tide is maybe turning."