This woman is a chess champion. And she's blind 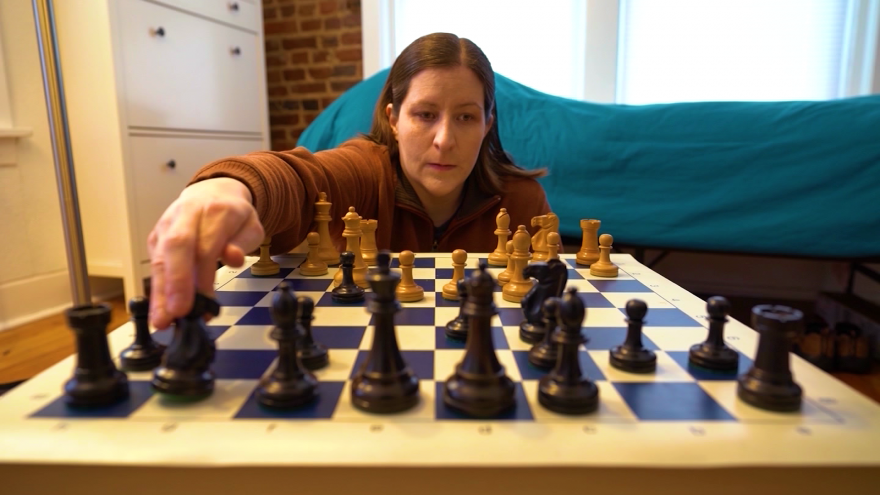 (CNN) -- Jessica Lauser is relentless on the chess board.

She plays quickly, applying constant pressure on her opponents. She attacks constantly, not unlike the Beth Harmon character from the Netflix television series, "The Queen's Gambit." She baits her opponents out of their comfort zones, then leverages the element of surprise.

Her success in the game has won her dozens of major accolades, and a spot on a championship squad that held its own against the best chess players in the world last year.

If this dossier isn't impressive enough, consider that Lauser is legally blind.

For Lauser, 41, chess has been an obsession and avid pastime since the second grade. She's leaned on it to help her transcend a tough childhood. She loves the game, and she has never let her disability get in the way of this passion.

"When I play chess, it's as close as I've ever come to a sense of equality," she told CNN in a recent interview. "When you start the game, no matter who you are, no matter what your physical condition is or where you come from or whether you have money, both sides start with the same thing."

A way to silence bullies

Lauser has been blind for almost her entire life. She was born 4 months prematurely, and needed oxygen, which damaged her eyes, a condition called retinopathy. Because of this condition, one eye is completely blind; in the other she has 20/480 eyesight. This means her visual field is severely limited and that she has little to no depth perception.

To her eyes, the chess pieces appear blurred and distorted.

As Lauser explained it, she can tell when a square on the board is occupied, but she can't always tell which piece it is. If she needs help identifying a piece, she'll lightly tap the top of it and say, "Identify."

She learned the game at age 7 and began to take it seriously in her teenage years. Initially, she saw it as a method to silence bullies. "I knew that the kids were going to call me 'four eyes,' and I said, 'Hey, maybe if I beat them, then they will finally shut up,'" Lauser said.

It became more than a way of silencing the bullies.

"When I saw that a child could beat an adult in this game, (I knew) there was obviously something special and different about this chess. It meant that it wasn't something that depended on the fact that somebody was stronger than someone else or that they had to see like everyone else. There was something special about (the game) that made me want to learn more."

As an adult, she found comfort in playing chess on the streets of Washington, DC, San Francisco and San Jose.

She said her favorite place to play has been the student union at San Francisco State University, from which she got one of her two undergraduate degrees at age 36. Not surprisingly, her games would always draw a crowd.

Catching fire during the pandemic

For Lauser, chess during the pandemic has been a consistent escape. In 2020, during the height of the pandemic, Lauser scored her third consecutive US Blind chess championship.

That was in October. The next month, right around Thanksgiving, Lauser teamed up with four other players to compete in the annual Olympiad with People for Disabilities, an international event. The tournament originally was scheduled to be held in real life in Siberia but instead was moved to to a virtual video competition. The venue was irrelevant; the competition was just as fierce.

It was the first time the US competed in this tournament, and Lior Lapid, the man who coaches the team, said nobody thought the team stood a chance against more skilled squads from places such as Russia and Brazil. In all, there were 60 teams from 44 countries, and the US team ranked thirty-ninth.

"The amount of adversity we had to overcome to do what we did—it's remarkable," said Lapid, who runs the PALS Chess Academy in Centennial, Colorado. "One of our players had seizures in the middle of his match and kept playing. Jessica is blind. Two of our other players are in wheelchairs. They believed in themselves and worked together. I am proud of what we accomplished."

What's next for Lauser

Despite the strong showing at the Olympiad, Lauser's future with chess is unclear.

On one hand, Lauser and her teammates have taken a star turn; Lapid's sister, who is a filmmaker, has collected footage from the recent tournament and is piecing together a documentary about the team and its valiant fight.

On the other hand, though Lauser would like to compete in the world blind championship later this year and the 2022 Olympiad (scheduled to take place in Russia), she worries she will not be able to afford the travel expenses to attend either, and will be forced to sit out.

Lapid, who does not have a disability, said he believes the team's performance at the Olympiad might lead to funding from regional and national chess federations.

Whatever happens, Lauser isn't going to give up on her lifelong goal to become a chess master.

"I have read and heard a lot of times that if you don't achieve (master) by a certain age, you never will," she said.

She doesn't believe it. "I don't have the same life trajectory as most people."