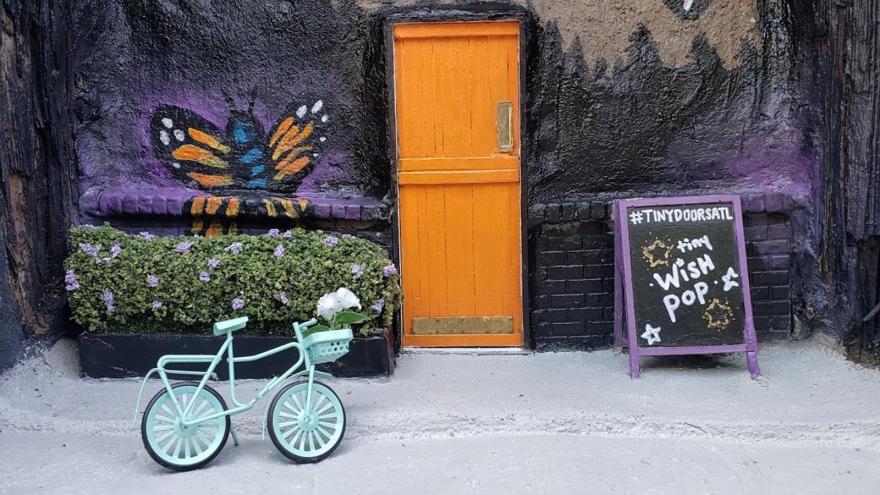 Scattered across Atlanta are a series of unique doors too small to be opened yet large enough to amass a legion of fans around the world and the attention of businesses like Coca-Cola.

(CNN) -- Scattered across Atlanta are a series of unique doors too small to be opened yet large enough to amass a legion of fans around the world and the attention of businesses like Coca-Cola.

These doors -- which are 7 inches tall and feature adornments like a mini tire swing and mailbox -- were constructed by Karen Anderson Singer, 36.

"The project is not about fairies or gnomes but instead about reflecting the spirit and architecture of the neighborhood," Singer told CNN.

In the short time she's been making tiny doors, Singer has become an unofficial ambassador for the art style. She has fielded dozens of calls from aspiring artists in the US and around the world seeking advice on how to start their own miniature public projects. Tiny doors have appeared in Minneapolis, Minnesota; Sydney, Australia, and countless cities in between.

One artist who spotted Singer's tiny doors on social media was McKay Lenker Bayer, a high school art teacher who lives in Provo, Utah. Bayer was drawn to Singer's consistency and creativity.

"Because I grew up believing in fairies and magic, I instantly loved Tiny Doors ATL. I had seen tiny doors and other small, hidden art projects out and about in my travels, but Karen was the first artist I saw who was consistently creating and maintaining them," Bayer said.

Bayer launched Tiny Art Show a year ago and has since curated 18 exhibits featuring miniaturized pieces of local artwork from around Provo.

The humble beginnings of tiny doors

While Tiny Doors ATL isn't meant to service fairies, Singer credits these mythical creatures as a source of inspiration.

"Fairy doors" first showed up in 1993 in Singer's hometown of Ann Arbor, Michigan. These doors were found in the home of Jonathan Wright, a designer, illustrator and self-described "fairyologist" who credits himself as the father of "urban fairies operations."

The Ann Arbor doors blended in with their surroundings, like the ones Wright placed in his hallway and in his cottage's cupola. Wright's first public "fairy door" was installed outside Sweetwaters Coffee and Tea in downtown Ann Arbor in April 2005 and mimicked the shop's brick facade.

"I love that they are truly doors to the imagination. I really enjoy seeing when folk discover them," Wright said. "Adults and children enjoy finding them. My wife, Kathleen, is an elementary school teacher and incorporates the fairy doors into her science and writing curriculum."

Singer was inspired by the fanciful nature of the fairy doors and decided to turn the concept on its head after moving to Atlanta in 2013. Tiny doors was about accessibility to public art and community, she said.

Unlike most street artists around the US, Singer's art project requires constant attention.

Singer spends roughly 10 hours a week traveling to her public tiny doors in an SUV filled with paint, gardening soil and sculpting tools to fix any defacements. One tiny door that often needs attention is on Atlanta's Beltline near the Old Fourth Ward on the east side. The jewel-lined door features a rainbow. She's had to fix this door roughly 50 times, totaling 200 hours.

"It sees a lot of homophobic graffiti," Singer said. "As a queer person, it breaks my heart. This is something that was originally painted for PRIDE years ago. People loved it; it got a really positive response. Now it's become symbolic of tiny doors, to have this rainbow around the door. It's important to me that this rainbow is maintained in the face of homophobia. It's just a rainbow, it's meant to bring joy."

Aside from her watchful eye, Singer credits the longevity of her public tiny doors to the partnerships she's forged with Atlanta businesses like the Fox Theatre, the Center for Puppetry Arts and the Georgia Aquarium. Each of these locations has one of Singer's doors. Each business credited her artwork for increasing public interest.

"The installation and unveiling definitely generated a lot of public relations and social media engagement as well as community buzz," Fox Theater's vice president of sales and marketing Jamie Vosmeier told CNN. "There's really no way to measure whether it impacted our actual business -- but we do know our guests love the one that's featured in the arcade."

Singer's door at the Georgia Aquarium, the largest in the western hemisphere with 10 million gallons of water, took 50 hours to create and install. It can be found near the aquarium's largest exhibit, the Ocean Voyager, where guests can see whale sharks and manta rays.

"As a major attraction in downtown Atlanta, we love supporting local artists and community efforts that showcase Atlanta within the city and around the nation," Jessica Fontana, the aquarium's senior director of communications and marketing, told CNN.

Outside of Singer's public tiny doors, she's done dozens of private commissions and has partnered with brands like Fresca and Dasani to create a series of tiny worlds accessible through Coca-Cola's "sip and scan digital content platform."

The future of miniature doors

Singer's installation in Little Five Points caps off a memorable week for the artist.

Singer was included in Georgia Trend magazine's "40 Under 40" list October 1. This year's list "honors the state's best and brightest under age 40 in nonprofits, healthcare, business and more," the magazine wrote online.

Singer will have a float featured in Atlanta's PRIDE parade. The city's celebration is from October 11-13.

Other upcoming events include a collaboration with singer and entertainer Puddles Pity Party for his Fox Theatre show in November and an interactive mural and door to be installed at the Atlanta Convention Center and Visitors Bureau near CNN that month.

But perhaps Singer's most important project on the horizon will be a tiny door placed at Children's Healthcare of Atlanta this fall. The third door is the last in a series she began there in the spring. Each door features a tiny accessibility ramp.

"The intent of these doors is to give children who can't leave the hospital encouragement to go outside safely on the campus," Singer said. "All of the tiny doors are meant to encourage people; to get out to explore and to use their imagination. These are created specifically for children who are experiencing illness. It was especially important and a natural progression of this project."

Watching Singer and other artists across the world have success with miniaturized doors has been bittersweet for "fairyologist" Wright.

Although fairy doors never developed into a career, Wright has found ways to make some money off his art.

Wright published "Who's Behind the Fairy Doors?" in 2012 and sells posters and postcards of the fairy doors online.

"I always have a bit of mixed feelings about other communities and business creating miniature doors. Obviously, it is a very engaging phenomenon and I have been very proud to have been an instigator," Wright said.