This teacher paid his students' utility bills with his stimulus check. He's not the only one donating the money 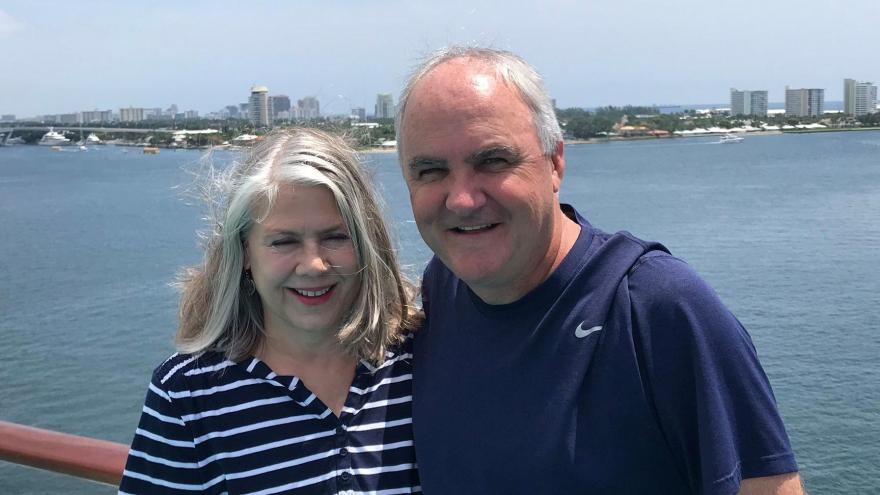 (CNN) -- Teacher Kent Chambers says he's fortunate to still be able to work during the coronavirus pandemic, so when he and his wife received their stimulus payment, they decided to help people who haven't been as lucky.

Chambers has taught math at Bob Jones High School in Madison, Alabama, since 1986 and said he knows some of his students are struggling.

"I'm actually in better shape because I'm not having to pay for gas to drive to work and I'm still getting paid exact same amount," he said. "There's no need for me to take the money and splurge and do something reckless with the money. Let's help somebody that really needs it."

Chambers and his wife Pat received $2,400 because they're married.

Here's how you can help

More than 88 million people received stimulus payments last week as part of the historic $2 trillion stimulus package, according to the Treasury Department and Internal Revenue Service, and more money is on the way.

Chambers said he used $600 to pay the utility bills for three of his students. He made the payments anonymously, so the families will just see they have zero balance. The money should cover their bills for a little more than two months.

He's also donating $600 to the burn care center at Shriners Hospital for Children -- Cincinnati because the hospital has taken good care of his niece since she was hurt in a house fire.

Chambers said his wife is also doing what she can to support local businesses and has kept paying her gym membership even though the gym is closed because of coronavirus.

The coronavirus pandemic has been devastating for many American workers and a record number of people have filed for unemployment benefits.

Small businesses that have had to shut down because of the pandemic are also struggling to survive.

The medical aid organization Direct Relief has seen an increase in donations despite the economic turmoil. The charity has been able to deliver 1.1 million surgical and N95 masks, 1.5 million gloves and other protective equipment to heath care workers since January.

"We've seen all sorts of creative and inspiring ways that people have stepped up to help others," Direct Relief spokesman Tony Morain told CNN. "I think a lot of people want to make a difference right now."

He said he didn't know whether those donations were coming from people's stimulus payments.

Software engineer Kevin Chieppo said he donated $900 from his payment to Direct Relief and gave the rest to a grassroots Massachusetts fund that supports groups that help the homeless, undocumented workers, low-income renters and other at-risk communities.

"I'm working and there's a lot of people that are filing for unemployment now and I sympathize with that. You know, I've been unemployed before and it's not easy. it's not an easy time for anybody," he said. "I just didn't feel right getting extra money and just not doing anything with it when a lot of people are struggling."

He said he did some research and asked his Facebook friends to suggest groups he could help.

"I wanted to get rid of the money as fast as possible to where it was needed," he said.

Stimulus is 'an opportunity to give back'

Cleveland attorney Rebecca Maurer wanted to use her $1,200 stimulus payment to help people in her community.

She said she has a steady job and her bills are paid, but she knows many of her neighbors have been laid off.

"Just hearing people's stories, it was very apparent to me that I was in a very lucky position and that I shouldn't be treating the check as a windfall, but really as an opportunity to give back to my community," Maurer said.

She gave money to the Northeast Ohio Coalition for the Homeless and University Settlement, which provides food and other help to seniors and families in her area.

She also bought a pair of earrings to support a local jewelry maker.

Maurer created the Cleveland Stimulus Pledge website to encourage other people to give the city a much needed boost.

She said about 100 people have taken the pledge and promised to give about $60,000 since she launched the website April 8.

Maurer is not collecting or distributing any money, she said, and the donors are giving directly to the organizations.

"What we really wanted to show was the effect of collective donation. So if one person does it that, that's great, but you can have even more impact if you see other people doing the same thing," she said. "So Cleveland Stimulus Pledge was just a way to show what we could all do as a community together rather than as individuals."

Donors could also suggest organizations and small businesses through the site for other people who aren't sure how they can help.

Maurer made $20 donations to about 20 charities on the list earlier this month to celebrate getting $20,000 in pledges.

CNN's Impact Your World has also compiled a list of donation opportunities and tips to help those affected by the crisis.