This strip of paper can help prevent a drug overdose 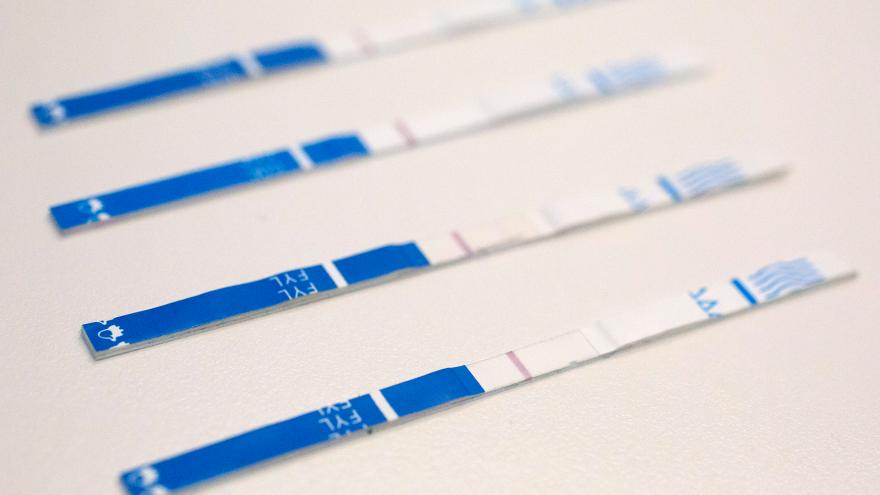 (CNN) -- It's a little strip of paper not much longer than 2 inches, and it has the potential to prevent a drug overdose.

These strips can detect fentanyl, the deadliest drug in the United States, when it's mixed with other drugs.

Between April 2020 through May 2021, there were more than 100,000 drug overdose deaths in the United States, the highest number of fatal overdoses on record for a 12 month period, and nearly two-thirds of those overdoses involved synthetic opioids like fentanyl.

The drug is 50 times more powerful than heroin and is extremely cheap to produce. It makes for an effective cutting agent that can stretch a supply of heroin or juice up fake prescription pills.

"We're at a greater risk for having unknown substances put into the drugs," said Tanya, 45, who lives in Greensboro, North Carolina. She asked that CNN not use her last name to protect her privacy.

Tanya has been using heroin on and off for the past 20 years, but she says now is the most dangerous time to use.

"It's so uncertain," she says of the drug supply.

"If I change dealers, or I get something from somebody that I don't know, I definitely want to have it tested," she added.

Fentanyl test strips were first developed as way to screen for people using fentanyl by testing their urine, but harm reduction groups found a way to utilize the strips to help keep the drug supply safer.

The strips cost not much more than a dollar, can be found on Amazon, and are easy to use. The paper strip can be dipped into a solution made by mixing a bit of drug with water. As with a pregnancy or rapid Covid-19 test, the strip can show results in a matter of minutes: one line means positive for fentanyl, two lines, negative.

Vincent herself has used on and off throughout her life and her own daughter died from an overdose in 2016. Keeping those around her safe has been a priority for her.

"Contrary to all what everyone says, people that use drugs are human beings and they want the same thing that every other human being wants," Vincenttold CNN Chief Medical Correspondent Dr. Sanjay Gupta.

The test trips give users a chance to pause and think about what they are using and how to protect themselves, she said. It's not enough to to say, "'I asked the guy selling it to me or the girl selling it to me. They said it wasn't fentanyl,' " she said.

Now, she says, there's a way to check. "When you know what's happening, you can make better decisions," she explained.

Drug checking -- whether with fentanyl test strips or chemical reagents to test for MDMA, bath salts or LSD -- has been utilized in Europe since the 1990s and is starting to find greater practice in the United States.

This past April, the Biden administration allowed federal grant money to be used to purchase fentanyl test strips for the first time.

"We must do all we can to save lives from drug overdoses," US Centers for Disease Control and Prevention Director Dr. Rochelle Walensky said in a statement announcing the April funding release.

"The increase in drug overdose deaths related to synthetic opioids such as illicitly made fentanyl is a public health crisis that requires immediate action and novel strategies. State and local programs now have another tool to add to their on-the-ground efforts toward reducing and preventing overdoses, in particular, fentanyl-related overdose deaths."

In an epidemic ofoverdose deaths, quantifying the ability of fentanyl test strips to prevent overdoses may be difficult to parse. But studies have found that people who use test strips are more likely to modify their drug use by using less, using slower, or making sure there was naloxone available.

Some people even throw away their drugs altogether once a batch tests positive.

The pandemic has made drug testing even more vital.

"What we've seen more more recently, especially during Covid, is big supply chain disruptions of the established cartels," said Nabarun Dasgupta, an epidemiologist researching drug use and infectious disease at the University of North Carolina, Chapel Hill. And with those disruptions, he said, he has seen a lot of new chemical synthesis methods used to manufacture what is supposed to be heroin or fentanyl. "We test samples that sometimes have no opioid in them and sometimes have like two or three different kinds of opioids in them."

Dasgupta has partnered with Vincent and her group to make drug checking even more sensitive by using infrared spectroscopy, a tool that can distinguish specific drug components. Since they've started using the machine this summer, the group has detected sugars as well as the large animal sedative xylazine indrugs.

Having this level of specificity gave Vincent and her group a chance to warn users of drugs adulterated with xylazine, which can cause severe skin wounds, but also to help prepare health care professionals for what they may be dealing with when drug users end up in the ER.

Drug checking is giving people autonomy, said Dasgupta. "It's about making rational decisions about what goes in your body," he said. He likened it to checking a nutrition label on the back of a soft drink. "It's the same thing that we do when we look at the back of a soda bottle and decide now I want to go with the Diet Coke this time," he said.

Dasgupta says these decisions now can help avoid downstream emergencies later. "If we can help them make better decisions about their health all along the pathway, maybe they will not have to seek that kind of medical care at the end of a very difficult period of their life," he said.

Tanya takes every opportunity she can to check her drugs and credits the strips with keeping her alive. "Is it worth your life? To take a minute, two minutes a little longer? You know, is it worth somebody else's life not to take the time to test it?" she asked.