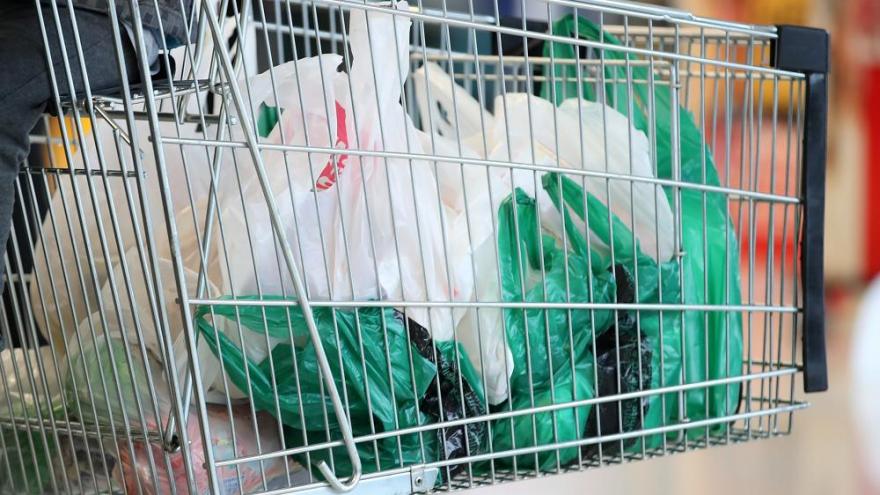 While some other states are passing laws and finding eco-friendly alternatives to reduce plastic waste, South Dakota is moving in the opposite direction. Plastic bags in use at New World supermarket in New Lynn on June 12, 2018 in New Zealand.

(CNN) -- While some other states are passing laws and finding eco-friendly alternatives to reduce plastic waste, South Dakota is moving in the opposite direction.

On Tuesday, the South Dakota Senate Commerce and Energy Committee approved a bill that would prohibit any ban on plastic straws, beverage containers, packaging or bags in the state.

The bill, which now advances to the full Senate, was sponsored by Republican Senator John Wiik. He believes cities in South Dakota shouldn't ban plastic "auxiliary containers" because the state is basically one large, "spread-out small town."

"We have to realize that as small towns are struggling to keep retail thriving, we're seeing people driving farther and farther to do basic shopping for groceries," Wiik said on his legislative blog. "I don't expect hockey parents from Pierre to know if Watertown or Mitchell has a ban on 'auxiliary containers,' and I don't believe that people who live in areas near big towns should have those decisions made for them."

He added that South Dakota has a smaller population than states that ban single-use plastics and that small retail stores and convenience stores in South Dakota are at a disadvantage when trying to find reasonably priced bags, food containers, cups and straws.

Senator Jeff Monroe, a member of the committee, voiced his support of the bill.

"Every time I think about a plastic coffee can getting thrown in the river, it doesn't bother me at all because it sinks to the bottom and it's habitat for bait fish, it's habitat for crayfish," Moore said in Tuesday's hearing, according to Dakota Radio Group.

Moore added that he puts pieces of plastic in his garden because it helps separate the soil and allows his plants to grow better.

The bill has found support among some residents of South Dakota.

Sioux Falls resident Brett Glirbas, who has cerebral palsy, is in favor of the bill. He told the committee that bans on plastic straws -- implemented in some cities to ease the burden plastic waste has on the environment -- don't take into consideration residents with disabilities who could bite down on a metal straw and hurt themselves.

But Rebecca Turk, a Dakota Rural Action lobbyist, argued to the committee that farmers and ranchers throughout the state have had problems with plastic blowing into their fields.