This social app prohibits edited photos to encourage users to be more authentic. It's growing fast 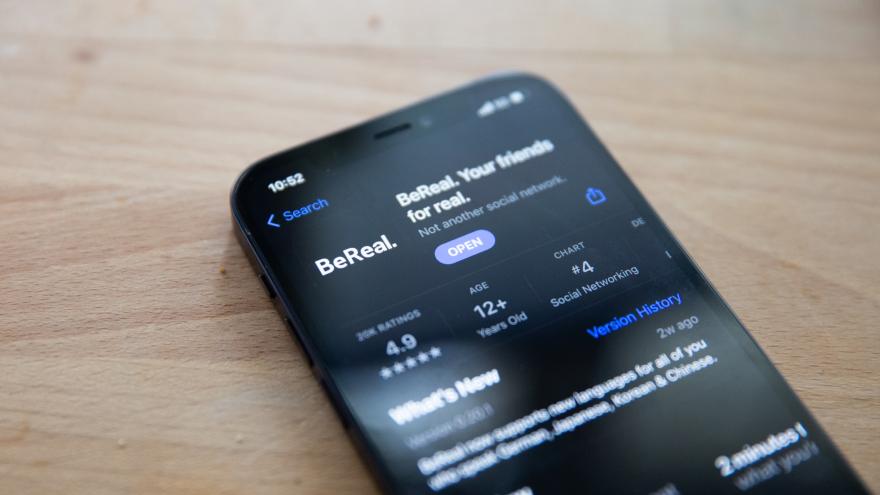 There's a newer photo-sharing app -- and it's not like other social media platforms.

The app is called BeReal. And while you may not have heard of it, a lot of young people are signing up. Its active monthly users have skyrocketed this year by more than 315%, according to data from Apptopia, which tracks and analyzes performance.

We joined the app and talked to users to get a deeper understanding of how BeReal works and what you need to know about it.

BeReal is a social media app that encourages users to share a slice of their life in real time. It was launched in early 2020 by an entrepreneur in France but a majority of its users -- at least 65% -- have signed up this calendar year.

As its name suggests, the focus is on authenticity. Users are invited once a day to share a photo of what they're doing at that moment, giving friends and others an unvarnished glimpse into their life.

It has no filters and no edit buttons. So if your hair is a mess at that moment and your view is of a rainy parking lot, that's what people will see.

The result is a far cry from the polished, overly curated photos popular on other social media platforms.

The concept of BeReal is simple. Once you download the app, you get a notification once a day that it's time to "BeReal." That means you have two minutes to snap and post a photo of what you're doing, no matter how mundane.

There's no set time -- the notification comes at random times of the day -- adding to the app's mystique.

"Push notifications are sent around the world simultaneously at different times each day," the company said in a statement. "It's a secret on how the time is chosen every day, it's not random."

That means the potential window into your life can open at any time. When it does, the app invites you to take a photo of what you're up to at that moment. It takes a dual photo -- a selfie and one showing what's in front of you. (BeReal doesn't permit videos yet.)

With only one post a day, there's no clutter of friends' pictures to mindlessly scroll through.You can only see friends' posts if you share a photo, which eliminates lurkers. Some people turn off their location for privacy reasons, since the app works in real time.

"What I like about BeReal is I am able to make connections with my friends via social media on a platform that does not incentivize likes, comments, or being artificial. ... solely showing your friends what you are doing at the moment that the daily alert goes off," says Telerski, a junior majoring in government.

Telerski says the posts he sees on the app are generally more authentic compared to other social media platforms.

"I try to post as soon as I see the notification, even if I am just sitting in bed or walking to class," he says. "I think the amount of authenticity depends on the persona each person creates on social media. If someone tries to keep their social media presence highly polished and produced, BeReal is not the app to use."

What happens if you don't post within the two minutes?

When you click on the once-a-day BeReal notification, your camera opens within the app along with a timer with a two-minute countdown. You have until the timer runs out to take a picture of what's in front of you. At the same time, your rear-facing camera snaps a selfie.

The app will share both images. You can retake them anytime during the two minutes and share them with friends when you're ready.

BeReal also allows users to take and post the photo later in the day. But it lets your friends know how many hours past the notification that you posted. In short, it puts you on blast for your lack of spontaneity.

Why are people using it?

BeReal has tapped into marketing on college campuses. It recruits young users via its college ambassador program, which allows students to host events that educate others about the app.

Telerski believes the app is popular because it's an antidote to the pressures to look perfect online.

"I have seen a lot of news coverage lately about the negative mental health impacts that social media has on Gen Z. I do not know if BeReal is directly attempting to combat this problem, but it is certainly making some ground toward that goal," he says.

Morgan Nott, 26, manages a tea shop in Reno and is a newbie on the app. She started using it last week at a friend's suggestion. Nott says she finds it refreshing to get a non-airbrushed, non-idealized glimpse into other people's lives.

"It's the authenticity of it that makes it so appealing. Users aren't as glamorized or fake as some can portray themselves on other platforms," she says. "It's something different."

In a statement, BeReal says its goal is to create "an alternative to addictive social networks" that focus on amassing influence, it says.

"BeReal is your chance to show your friends who you really are," the company says. "BeReal won't make you famous, if you want to become an influencer you can stay on TikTok and Instagram."

Are BeReal posts really so authentic?

The app doesn't give you much time to put on makeup or stage your surroundings before you snap and post photos.

But some users may still try to curate their lives on the app.

"There is the potential to be just as artificial on BeReal as people tend to be on other platforms," Telerski says. Some people might ignore the notification to post at a certain time and wait to post until they are dressed up and out at dinner with friends, he says.

"It is not in the spirit of BeReal and entirely defeats the purpose," he says. "BeReal should be full of pictures of (people) walking, doing homework and sitting in bed watching Netflix."

The young people CNN spoke to have no plans to give up Instagram, TikTok and other social media apps.

Nott says she plans to keep letting her guard down on BeReal -- and to keep posting on other social media platforms as well.

Telerski says he tries to maintain a certain level of authenticity on social media regardless of the platform. Authenticity is determined by a person, not an app, he says.

"For those who think we need a new social media app in order to be truly authentic, maybe we should take that as a sign to be more authentic throughout our existing social media presence," he says.

"Think about what social media was originally intended for -- real connection through family and friends keeping up with your life. Maybe we should get back to that."