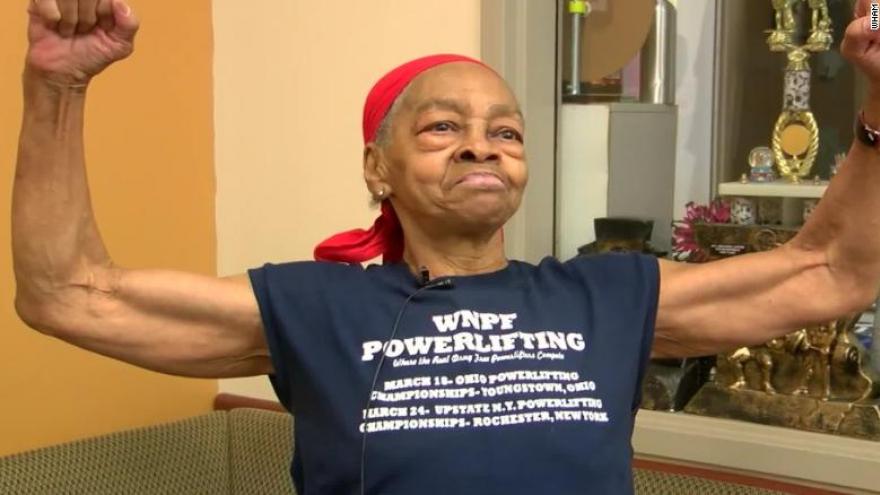 Willie Murphy said she was getting ready for bed Thursday night when a man began pounding on her door, urging her to call an ambulance for him, CNN affiliate WHAM reported.

Murphy told WHAM she called the police but wouldn't let the man in her house. Then, she said, he became angry and broke through the door.

"It's kind of semi-dark and I'm alone, and I'm old. But guess what, I'm tough," she said, bearing her muscular arms. "He picked the wrong house to break into."

Murphy is an award-winning bodybuilder who said she works out at her local YMCA almost every day.

As Murphy tells it, she used a barrage of household items to attack the intruder, beginning with her own table.

"I took that table and I went to working on him," she said. "And guess what? The table broke."

Unphased, Murphy said, she used the metal legs of the table to keep hitting him.

After jumping on him a couple times, Murphy ran to the kitchen, grabbed a bottle of baby shampoo and squirted it on the man's face as he tried to get up.

It didn't end there. Next, she said, she took a broom and whacked him some more.

By that time, the intruder was ready to leave. Though Murphy said she can deadlift 225 pounds, she struggled to drag the man out of the house.

"He wants to get the heck out of there. And I'm trying to help him get out of the house, but he's too heavy. I can't move him. He's dead weight."

At that point, the police arrived in response to Murphy's earlier call.

"So they come in," she said. "He's laying down already because I had really did a number on that man. I'm serious."

The man was put in an ambulance. Murphy thinks he was probably relieved to be out of the house.