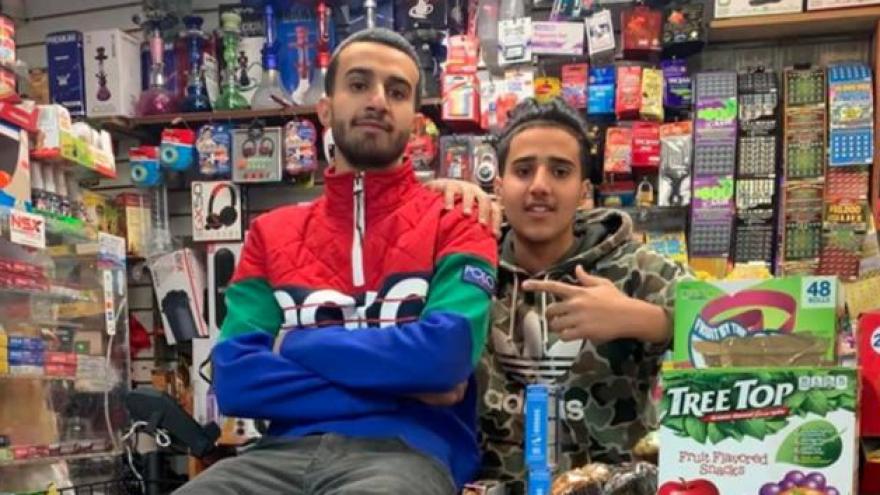 Ahmed Alwan, left, with his younger brother Youssef, came up with the idea at Lucky Candy convenience store in the Bronx.

(CNN) -- A sandwich, a soda or maybe even a chocolate bar to satisfy a midnight craving: These are some of the many things you'd expect to find at a New York deli and convenience store.

But customers at Lucky Candy in the Bronx get an entirely different experience, and it's all thanks to cashier Ahmed Alwan.

To his customers, the 20-year-old college student is easily recognizable, and it's not just because of his bright smile and cheerful energy. Two weeks ago, Alwan decided to start playing a game with shoppers -- and it's since gone viral.

The rules are simple: If you can solve a math equation, you get five seconds to grab anything you want off store shelves and have it for free.

The one thing you're not allowed to grab? His cat. (Yes, someone tried.)

"All I wanted to do was to help people," Alwan told CNN. "But I wanted to make it fun. So I made a TikTok and chose a challenge, asking them a math question. It's a way to entertain and educate people in need while putting a smile on their face, too."

Two weeks and 13 videos later, Alwan has become an internet sensation, gaining more than 300,000 followers on TikTok and 17,000 on Instagram. In his videos, Alwan can be heard asking customers simple questions such as, "What's 5 times 5?" or "9 times 9 minus 5?"

Those who answer correctly use their five seconds (and a few quarters) to scramble around the store grabbing anything from chips and ice cream to speakers and hookahs. But no matter how much they grab, or how valuable the items are, their cost is always the same: $0.

A history of giving back

Alwan pays for everything out of his own pocket. His main concern isn't money, he said, but helping low-income community members save for higher priority expenses, such as rent and utilities.

"It's great to see him do good and help out the community, and most importantly represent Islam," Aobad, an immigrant from Yemen, told CNN. "It's impacting the business in a positive way, bringing awareness and attention to the store as well as spreading positivity throughout the community."

Many of the store's customers are familiar faces, people Alwan has known since he was 13 and began working in the family business. Others are strangers. But they all get a fair shot at solving a math problem.

Alwan, who's studying at Bronx Community College to become a pharmacist, has a history of being charitable.

He often gives customers food and household supplies on credit, his father said. And on cold mornings when he spots people sleeping at the nearby train station or by the tracks, he offers them free coffee, bananas and muffins.

Alwan's TikTok and Instagram videos are heartwarming and funny, but what they've done for his community goes beyond free chips and cookies.

"This changed our relationship with the community big time," Alwan said. "They're all showing me so much love and lining up at the store just for a chance to play. We have so many visitors coming to take pictures and say hi. But it's not about me. It's about the community."

Alwan said he plans to continue making videos, and even getting more creative with his questions. He even started a GoFundMe to support the game and enable him to help more people.

"The money will be going towards products and food that would be used for the challenges and even simple donations for customers in need," he said.

The goal, he explained on the GoFundMe, is "to inspire others to always be kindhearted."