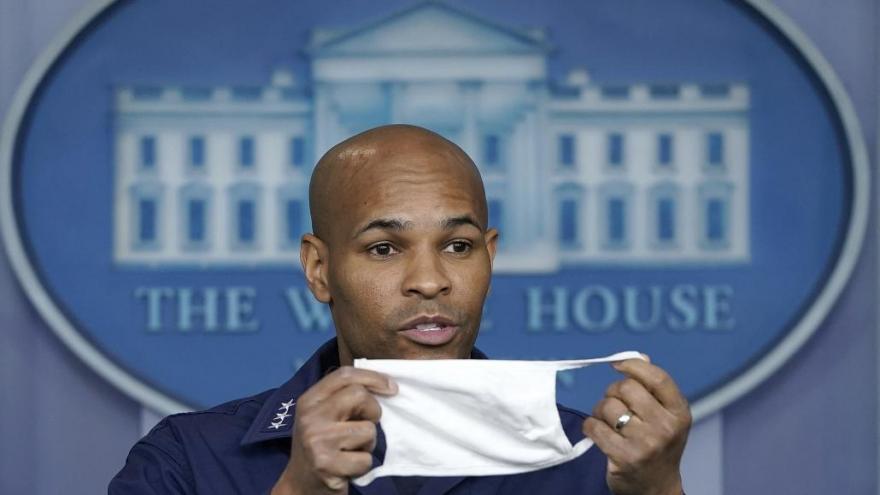 U.S. Surgeon General Jerome Adams, seen here during the daily briefing of the coronavirus task force at the White House on April 22, 2020 in Washington, DC, said Sunday on CBS' "Face the Nation" that education on masks would benefit Americans.

(CNN) -- US Surgeon General Jerome Adams on Sunday said a mask mandate would work best at local and state levels, casting doubt on how a national mandate would be enforced and saying that education is needed.

As coronavirus cases surge across the US, the debate over whether to require Americans to wear a mask to slow the spread of the virus has intensified. Some states and cities have made wearing a mask a requirement in certain situations and the US Centers for Disease Control and Prevention has advised that everyone "should wear a cloth face cover when they have to go out in public."

And as protests over racism and police brutality continue nationwide, Adams again raised his concern over mask wearing and policing, saying during an interview with FOX 5 DC last week, "I really worry about over-policing and having a situation where you're giving people one more reason to arrest a Black man."

Wearing a mask during an interview with CBS' "Face the Nation" on Sunday, he doubled down on his concern and said education on masks would benefit Americans.

"I am saying if we are going to have a mask mandate we need to understand that works best at the local and state level along with education. We need people to understand why they are doing it and we need people to understand how they benefit from it," Adams said. "Because if we just try to mandate it you have to have an enforcement mechanism and we are in the midst of a moment when over-policing has caused many different individuals to be killed for very minor offenses and that is an important consideration."

Democrats have previously called for a national mandate on mask wearing, including House Speaker Nancy Pelosi who said last month that a federal mandate is "long overdue." Adams on Sunday also said that the administration is trying to correct it's earlier messaging on masks when officials told Americans it was not necessary to wear masks, but conceded that "it is very hard to do."

"We're trying to correct that messaging, Margaret, but it's very hard to do," he said, adding that his previous comments that masks were not effective in preventing the spread of the virus was "because everything we knew about coronaviruses before that point told us that people were not likely to spread when they were asymptomatic."

"The primary reason was because that's what the science said and I want the American people to understand we follow the science and when we learn more our recommendations change, but it is hard when people are continuing to talk about things from three, four months ago," he said.

After the interview, Adams tweeted a video of himself dancing and encouraging mask wearing, saying, "The little ones begged me to do a public health video," adding their message was to wear a mask.